Researchers have found the coronavirus uses a known evasion mechanism 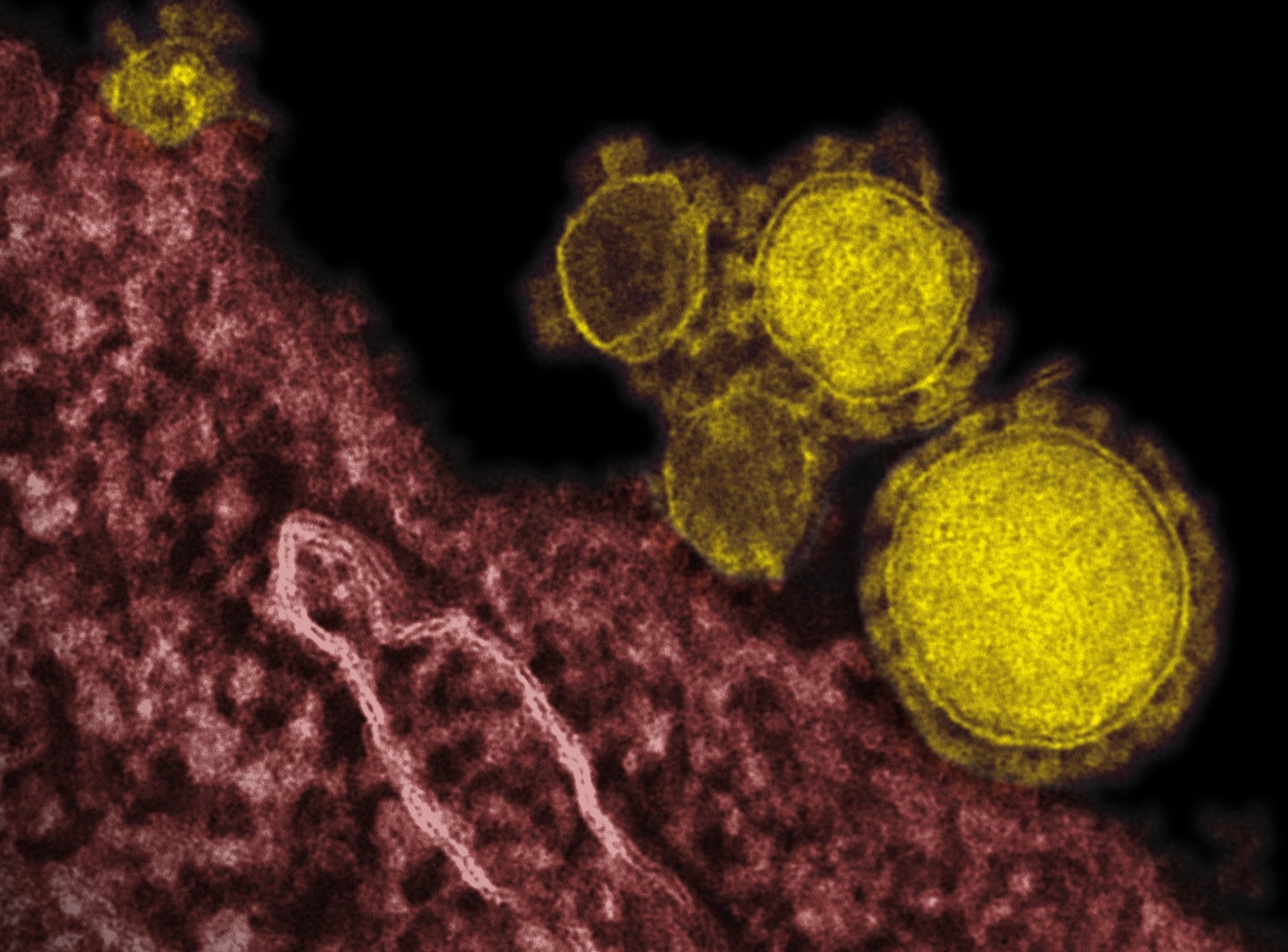 One of the most frustrating aspects of dealing with a newly discovered virus is attempting to understand how the virus causes illness. The process can take years and usually answers come long after the public has lost the fear associated with the outbreak or epidemic. This struggle is currently being seen in the fight against the Zika virus. While the wave of infections continues to cause consternation, the actual mechanisms behind this virus’ short and long term activities remain unresolved.

The same issue happened a few years ago with the discovery of another virus in September of 2012. First found in Saudi Arabia, the pathogen spread throughout the Gulf States and beyond. Today, the infection is known as Middle East Respiratory Syndrome (MERS) and the causative agent is the MERS coronavirus (MERS-CoV).

The public fear over MERS has abated over the close to four years since the first confirmed case yet the virus continues to represent a global threat. To this end, any information to provide perspective on the pathogenesis of the virus is welcome and may offer routes to therapeutic strategies.

Last week, another piece of the pathogenic puzzle was revealed by an American team of researchers. They discovered MERS-CoV has the ability to evade the immune system by inhibiting a rather unique means of viral protection. Based on their studies, a door may be opened to identify means to deal with the virus after infection and potentially save lives.

The team focused on one the oldest known antiviral mechanisms in the immune arsenal. It’s called the interferon-inducible 2′-5′-oligoadenylate synthase/RNase L pathway, or OAS/Rnase L. Upon viral infection, the immune system produces interferon, which signals cells of an impending battle. Within the cell, the introduction of this molecule leads to the expression of variety of molecules including OAS.

When a virus enters the cell, it releases its genetic material, some of which can be detected by OAS. When this occurs, a molecule containing a particular sequence of nucleotides (2’-5’-oligoadenylate) is produced. This short chemical can then interact with RNase L. Normally, the enzyme is inactive or latent (thus the L). But as soon as contact is made, there’s an activation that turns the quiet floater into a chopping machine. If a single stranded RNA molecule is found, it’s degraded and soon will be destroyed. 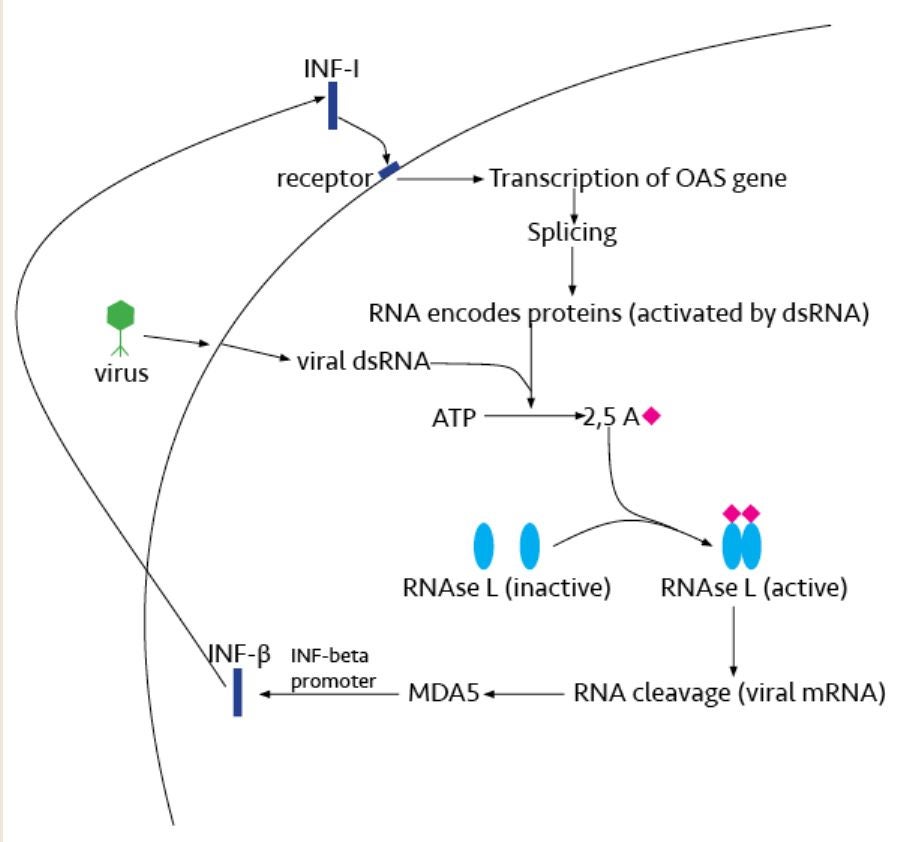 The activity of RNase L is quite important in the context of viral pathogenesis as all viruses rely on RNA at some point in the cell. Without it, there can be no replication and as a result, the infection will quickly end. To make the situation worse for the invader, RNase L also can make the cell kill itself, a process called apoptosis. For the virus, this means certain doom.

Because of its antiviral activity, RNase L has been recognized as an important factor in the immune response to virus infection. However, that also means it is a potential target for viruses. All that’s needed is an enzyme to break down the activation signal – the oligoadenylate – and the virus can live to infect another day.

The team already knew of such a capable molecule. It’s called phosphodiesterase, or PDE. This molecule is an enzyme that seeks out the oligoadenylate and breaks it down so it cannot be recognized by RNase L. It’s actually contained within human cells and acts as a regulator of RNase L activity to ensure only a few of the molecules are activated at any time. After all, too many active forms could lead to dire consequences for the cell.

The group also knew of a few viral versions of PDE. One happened to be in a human pathogen, rotavirus A virus while the other was found in the mouse in the form of mouse coronavirus.In this latter case, the actual sequence of the protein was known and as it was also a coronavirus, provided a good base upon which the search for PDE in MERS-CoV could begin.

An examination of the genetic code of MERS-CoV gave them the first hint they were on the right track. One of the proteins expressed by the virus, known as NS4b, had a similar structure and alignment to the NS2 of the mouse coronavirus. Further examinations at other coronaviruses revealed this was definitely close at least in terms of computer modeling.

To prove this was the protein of interest, they had to show it could cleave the oligoadenylate. They cloned the NS4b gene into a bacterium and then mass produced it so they could run the enzyme studies. As expected, the protein did the job; they had found their target.

The only remaining experiment involved taking out the NS4b gene and observing in a cell culture model. If this was the only evasion technique, these mutated viruses would simply die off. But they didn’t, suggesting PDE is just one of the ways MERS-CoV can avoid being killed in the cell.

The results of the study clearly point out the difficulties in understanding viral pathogenesis. While the team did find the enzyme they expected and it did perform the job they hypothesized, when it came to the actual infection, there was more to the equation. Even so, this study provides valuable information and will no doubt help in the future to find ways to combat and eventually beat MERS-CoV in the future.