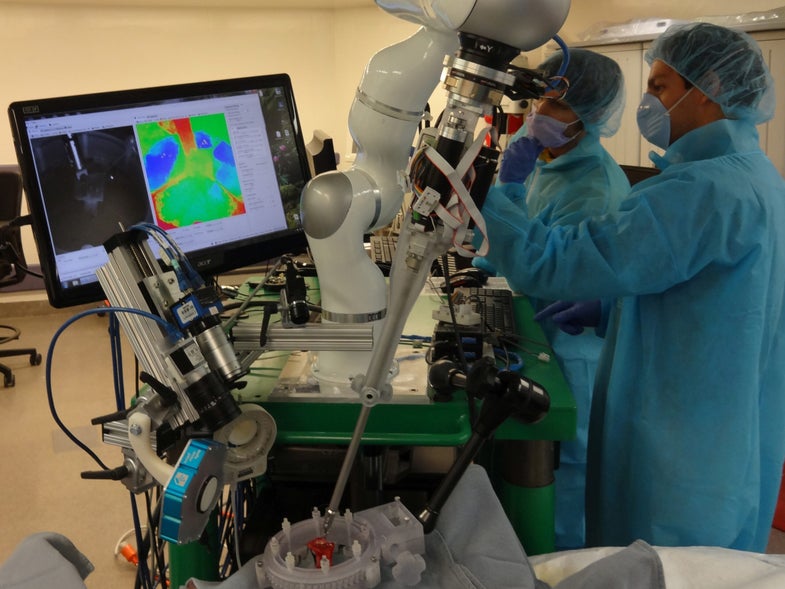 In recent years, robots have steadily crept their way into the operating room, helping to perform procedures as humans direct their movements. Robotic devices in surgery have a lot of potential benefits; they can help reduce error rates and increase the efficiency of the surgeries. But developing a robotic device that can perform the surgery completely on its own has been challenging, especially for surgeries that involve soft tissue, where the dexterity of the surgeon’s hands are vital.

Now, a group of researchers at The Children’s National Medical Center in Washington, D.C. have developed a device that they say is able to perform these surgeries without the constant watch and manipulation of a surgeon. Their work was published today in the journal Science Translational Medicine.

Most robotic surgeries that are performed today are not completely autonomous. While the machine is performing the surgery, every step or movement that it makes is directed by a surgeon; so the precision of the movements and the surgery in general are only as good as the skills of the doctor who is controlling it.

The researcher’s goal was to create a device that could perform a soft tissue procedure by itself, without any help. So they developed a machine, called the Smart Tissue Autonomous Robot or STAR, which is a lightweight robotic arm meant to lean over a surgery table with a suturing tool attached at its end.

Before a procedure, surgeons preprogram the device for the specific operation, telling it things like what the ideal spacing should be between each suture, how much tension to give, and how many sutures should be there. Special fluorescent biomarkers were also added to the tissue to guide the direction that the robot should take.

To test out their device, they had the robot perform sutures that connected bowel segments together in pigs. They also had surgeons and robot-assisted machines perform the same procedure. When they compared them all together, the researchers found that the robotic STAR machine was on average, more accurate than the other two methods.

In the paper, the researchers report that 60 percent of the surgeries were performed completely autonomously, meaning the physicians provided no help during the procedure. For the other 40 percent, the researchers made adjustments to the robot during the surgery. However, they note that these adjustments were very minor and think the device could be autonomous 100 percent of the time.

With more research, the researchers believe that this device could be used regularly under the supervision of a surgeon and has the potential to decrease complications to provide better outcomes to save lives.