Is your brain ready for YouTube’s new mini-player?

On multi-tasking and the possible death of tabs. 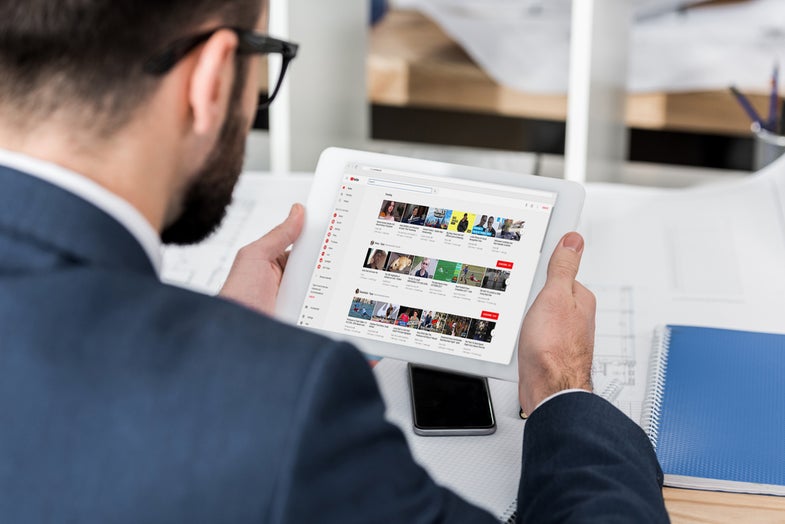 This week, viewers may have noticed a new tool in the bar beneath each YouTube video. The button, a small white box nested inside a larger box, is the much-awaited mini-player. Instead of giving your attention to one video at a time, users can now watch videos in a small pop-out player in the corner of their screen, freeing them up to search for new videos on the rest of the YouTube site. While literally miniature, experts say the feature could have huge consequences for our brains—and the future of streaming.

Yann Lhomme is the co-founder of ThinkMojo, a self-described “viewer experience agency.” Where other firms focus on user experience, or “UX”, design for text-based websites or standard apps, Lhomme’s team is focused entirely on video. He says that the rise of mini players—which began in earnest with Facebook’s floating desktop video pop-outs in 2015—have created a few practical challenges for designers.

Right now, businesses and creatives must craft different iterations of their video content for different platforms. Instagram and Snapchat are vertical. Though YouTube has been adding new functionalities over the past year, it’s long been dominated by a big fat horizontal screen. Uploading something beautiful to each site required some individualized finesse. Adding a mini-player adds one more dimension to this “fragmented” industry, Lhomme says. Can viewers, for example, still read your video’s text once it’s shrunk to the corner of the screen? How do you maximize one video for two drastically different sizes? “On the other hand, I think it’s a pretty neat feature,” he says. “I think there’s demand for it.”

Previously, YouTube’s desktop site played one screen-dominating video at a time, and generated its own follow-up sections, which auto-played when the first video was done. Now, users can browse the site while their video plays, allowing them to queue up their own second, third, and fourth video. It also keeps people active on the existing page. If your mind wanders, you don’t necessarily need to grab your phone or open a new tab to get a hit of dopamine, you can mess around on Youtube. And, perhaps most importantly to the company, the launch of the mini-player brings continuity across the company’s platform; now, YouTube dot com is looking a lot more like YouTube the mobile app.

What do our brains think of all this? Earl Miller is a professor of neuroscience at MIT and an expert in human cognition—and its limits. “The thing about multitasking is that you can’t really multitask,” he says. “Our minds are actually moving back and forth between tasks, or in this case, between videos.” Many of us believe ourselves to be proficient multitaskers, but Millers says that’s comes from a subtle act of self-deception. “Our mind papers [the gaps] over,” he says, creating an illusion of continuity. But lab studies reveal the truth: when we say we’re multitasking, we’re just doing two things badly.

Social media platforms rarely ask you for cash directly. Instead, they make their money through advertising. Facebook, YouTube, Twitter, Snapchat, Instagram all know so much about you that they can target you with advertisements relevant to your interests to keep you from mindlessly scrolling by. And that’s important, because advertisers want you to be paying attention.

This so-called “attention economy” is the source of incessant push notifications, infinite scroll, and autoplay. Each feature is designed to keep you on the site. It’s working: When researchers compare the amount of time people report they wanted to spend online with how much time they actually do, the gap often measures in the hours.

As digital device adoption plateaus—Pew Research reported this week that the number of Americans will cellphones hasn’t changed since 2016, and the number with desktops has actually declined—the mini-player and related features make more sense than ever. Historically, TV networks emphasized the “second screen”—the phone or tablet you scrolled through while the Thursday night lineup was running. Now, though, this new generation of streaming services can build a second screen right into your existing experience.

The current iteration of the mini-player is child’s play compared to what the feature could become. Right now, the service is confined to YouTube’s site. However, Lhomme and others believe the tiny video could one day follow you around on any site. At least, that is, in Chrome, the web browser run by YouTube’s parent company, Google. “It definitely seems like the next logical step,” Lhomme says. “I can’t imagine that Google isn’t working on that already.”

From a technical perspective, this service wouldn’t be the hardest thing YouTube’s ever tackled. Trying to combat extremism and predation are much harder than building what would essentially be a Google-approved Chrome extension. But from a business perspective, enabling viewers to bring YouTube videos with them wherever they go would be, in a word, aggressive. Though it’s likely to be well-received among customers (many of whom are already demanding this feature), the move would essentially herald the end of tabs—and create conflict with other sites that need eyeballs on their content and their advertisers to turn a profit.

Tabs were introduced early in the internet’s history. Building on tabs in spreadsheets, a defunct browser InternetWorks brought tabs to web windows in 1994. Earlier browsers opened each new site in a different window, but tabs created a system similar to a physical file folder: one window displaying a bunch of different information, all visible in a single glance, and easy to move between.

The entire internet experience has since been organized around these lines. Unless you’re adding on more machinery—two connected desktops, or a computer in front of you and a phone in your hand—each tab is a discrete unit. A YouTube mini-player you can take with you anywhere would change that dynamic. Instead of sharing an equal amount of space with every other site—one tab for everyone!—the streaming service could monopolize attention on any site at any time.

The true impact of the mini-player remains to be seen. But it’s important for viewers and product developers alike to remember the “paradox,” as Lhomme calls it, a feature like this presents. “You make it more convenient for users to binge-watching, or watch content passively,” he says, but “at the same time, you’re adding to the noise.”