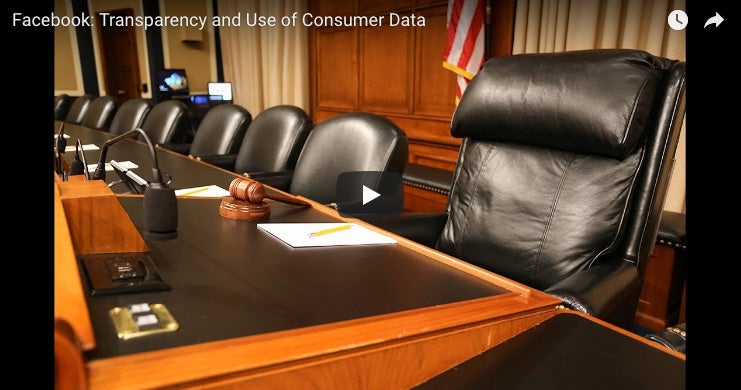 2018 is off to a phenomenally bad start for Facebook and its CEO Mark Zuckerberg. Over the next two days, Zuck will testify in front of three congressional committees: Senate Judiciary, Senate Commerce, Science, and Transportation; and the House Energy and Commerce Committee. Here’s what you need to know before the inquisition starts.

This specific kerfuffle sprung forth on March 21, when Facebook publicly announced that a company called Cambridge Analytica misappropriated and misused the personal information for a then-undetermined number of Facebook’s 2 billion users. That firm was linked to Steve Bannon and the 2016 Trump presidential campaign.

How many people did the security issue affect?

Original reports put the number between 30 and 50 million, but once Facebook was ready to talk about the subject officially, the company said up to 87 million people could have personal information floating around out there from this one specific issue.

How did they get hold of that much data?

Facebook used to work differently. In 2007, the company opened itself up as a platform which other sites and apps could use for things like easily logging in and leaving comments on websites. Looking back, the rules about data collection were soft, and allowed companies to track information about you and your friends—even if they didn’t know it. So, fewer than 300,000 people signed up for an app called This Is Your Digital Life and took a personality test. In doing so, they exposed enough personal data about themselves and all of their friends that Cambridge Analytica could build “psychoanalytic profiles,” and then use them for marketing purposes.

Did it affect me?

We’re not sure yet! Facebook says notifications started rolling out on Monday, April 9, alerting people about whether or not their info was part of this issue. I haven’t gotten a notification yet, however, and it seems very few—if any—have. Expect to see a notification in your app soon, but if you want to check now, you can go here.

Can Facebook apps still soak up information about my friends and me?

Facebook announced a change to its terms of service in 2014 to prevent apps from collecting data about users’ friends and required an opt-in for information collection. However, the actual change came too late to stop the Cambridge Analytica data collection. And the company allegedly hung onto data, even after it was legally certified as deleted.

That change tracks all the way back to an FTC mandate in 2012, which said the company needed to get user consent before collecting data and sharing it with others. Expect to hear a question about why it took so long to implement such a policy, which likely would have prevented this Cambridge issue in the first place if done correctly.

What about all the apps I have connected to Facebook?

They’re still collecting data about you, but you can control—or at least see—how much. Here’s a guide we put together about how to see what’s tracking you.

What is Zuck going to talk about at his testimony?

The first hearing starts this afternoon at 2:15 PM (Eastern), but Zuckerberg’s prepared statement is already available online if you want to read it. Zuckerberg takes credit for the problems while simultaneously reminding everyone that he started Facebook in a dorm room and never expected it to get to the level it has reached. It’s a story we’ve heard before. There will also be a question and answer segment, with each committee member getting 4 minutes to question Zuck.

Could we find out about more companies who used information like this?

It’s possible. Facebook has said that it’s looking into whether or not there are more cases out there like this Cambridge Analytica debacle. Someone will almost certainly ask this question of Zuckerberg, so we could find out about other specific companies misusing data. Just yesterday, the company suspended a Canadian firm called AggregateIQ because it “may have improperly received (Facebook) user data.”

What else will the panels ask Zuckerberg?

Facebook has had a rough go since 2016 with a couple major scandals in the mix. It was the birthing ground of the “fake news” phenomenon leading up to the election, and there has been an extensive investigation into whether Russian operatives used the platform to influence the outcome of the 2016 presidential election. Facebook shut down more than 100 pages and accounts run by the Russian troll farm, but not before more than 126 million facebook users (and 20 million Instagram users) saw their propaganda running through their feeds.

Zuck famously said it was “crazy” for fake news to have any kind of influence on the election, a statement that has come back to bite him on many occasions. The negative reaction to that statement may play into how apologetic he has been in this current investigation.

What’s the endgame of all these hearings?

The ultimate question is if—or more likely how—the government will try to regulate Facebook and other enormous social networks. Facebook is already currently dealing with the impending rollout of the EU’s General Data Protection Regulation, which start in May and demand increased transparency and responsibility for how user data is treated.

Zuckerberg has already made it clear that increasing security will cut into the company’s profits, thanks to initiatives like the hiring of 20,000 employees to help screen content. More regulations will certainly require more cash to accommodate.

How can I watch the testimony?