The “polls” and “watch together” feature will also be available on both apps. 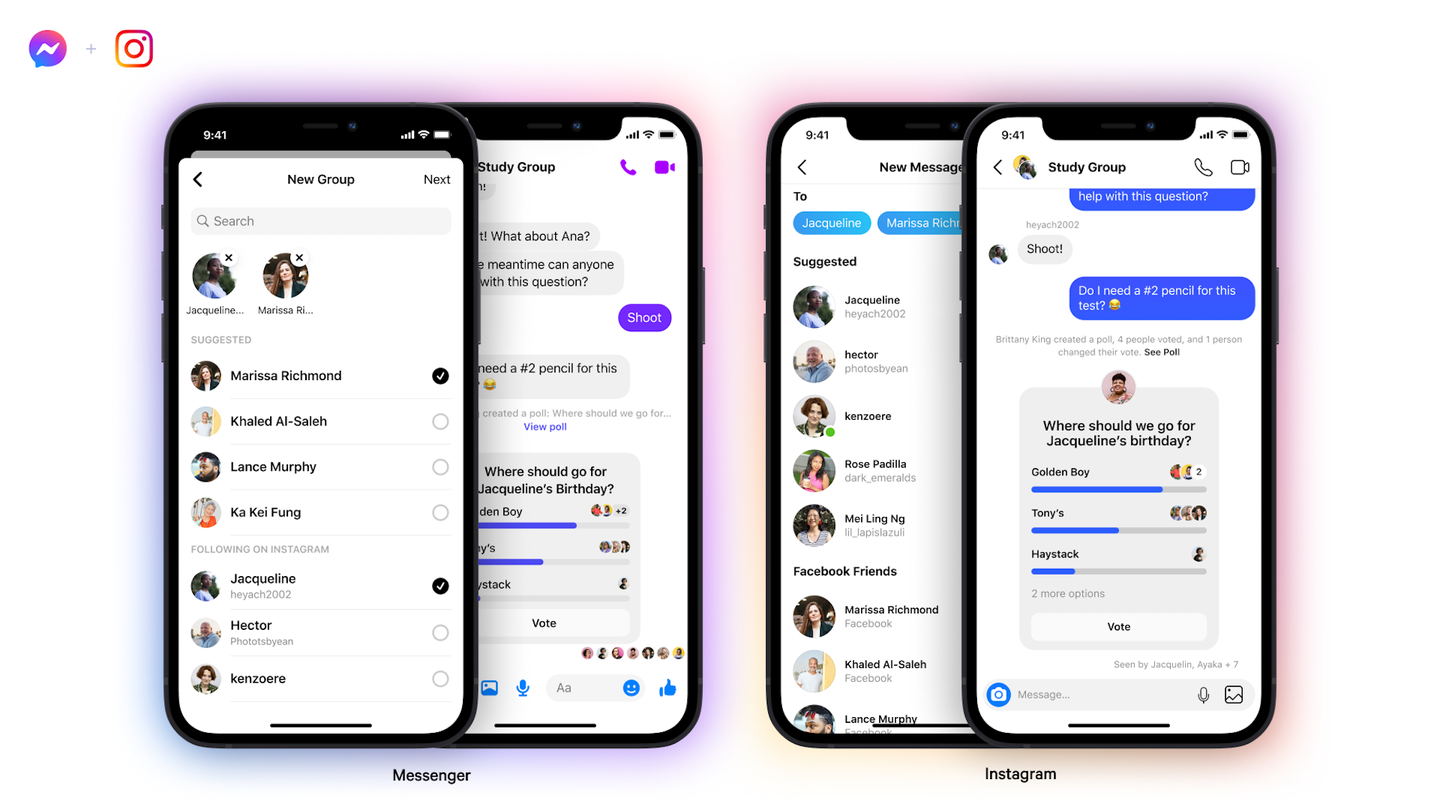 On Thursday, Facebook Messenger announced a slew of new products and services, including the ability to host cross-app group chats between their platform and Instagram.

This feature expands on the cross-app messaging capability between Messenger and Instagram that Facebook introduced last year on this date, and will allow users to start group chats with Instagram and Messenger friends.

Sateesh Kumar Srinivasan, director of product management for Messenger, said in a statement that people can still use delivery control to determine who goes in their “Chats List,” who goes to the “Message Request” folder, and who can’t message or call you.

Additionally, users can now create polls in Instagram DMs, just like in Messenger. And in the group chats, users will be able to see when their friends are typing at the same time either in the Messenger app or in Instagram. The “Watch Together” feature from Messenger will now extend to Instagram posts like Reels and IGTV videos. New chat themes like “cottagecore” and “astrology” have been added as well.

We’ve known for a while that changes like these were coming. Back in 2019, The New York Times reported that Facebook CEO Mark Zuckerberg intended to integrate the messaging services between WhatsApp, Facebook, and Instagram, which will unify the underlying technical infrastructure between the different apps. The goal is to also have end-to-end encryption in effect across all of these different messaging platforms, meaning that only the sender and receiver could see the content shared via messages, which is a boost for privacy considerations. Furthermore, Zuckerberg recently announced that WhatsApp will encrypt message backups in the cloud, closing a loophole that could expose people’s private chats.

“I believe the future of communication will increasingly shift to private, encrypted services where people can be confident what they say to each other stays secure and their messages and content won’t stick around forever,” Zuckerberg wrote in a 2019 blog post on Facebook. “We plan to build this the way we’ve developed WhatsApp: focus on the most fundamental and private use case — messaging — make it as secure as possible, and then build more ways for people to interact on top of that, including calls, video chats, groups, stories, businesses, payments, commerce, and ultimately a platform for many other kinds of private services.”

These new announcements come on the heels of two federal probes into Facebook’s practices, including a call to testify at a Congressional hearing about Instagram’s impact on kids and teens, and a lawsuit from the Federal Trade Commission asking for Facebook to be broken up because it’s essentially a monopoly. The FTC filed an amended complaint to the suit against Facebook in August, and said in a statement that “to further moat its monopoly, Facebook lured app developers to the platform, surveilled them for signs of success, and then buried them when they became competitive threats.”

According to TechCrunch, Facebook’s intention behind these new changes might be to weave individual products under the Facebook umbrella together in a way that they have to “rely on each other more and more,” making it easier for the company to “argue that these apps are dependent on one another and cannot be separated.”