Are you sick of Superzoom yet? You will be. 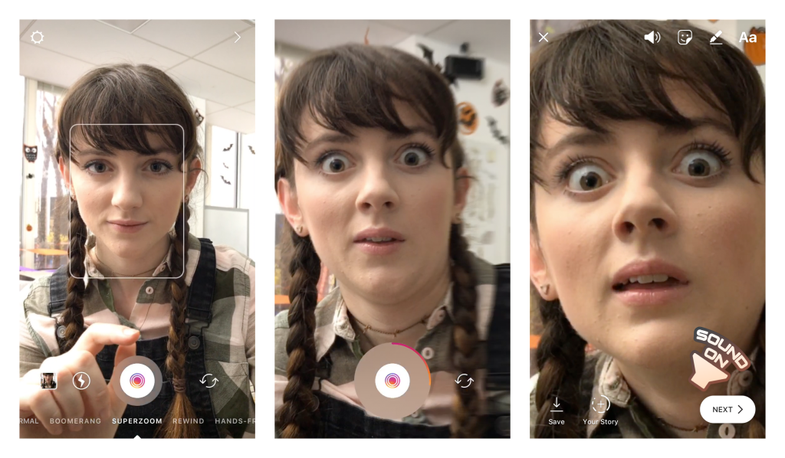 If you’ve checked your Instagram Stories feed today, you’ve surely seen people abusing Instagram’s new Superzoom feature. It’s a kitschy effect that mimics a meme called “Dramatic Chipmunk” from the ye olde days of the internet. Oddly, it’s not even really “zooming” in a literal sense, as much as it’s just cropping in on regular video. It’s, in a word, stupid, but it’s also fun and a shiny new toy is a perfect thing to entertain the 250 million Instagram users that interact with Stories every single day.

Superzoom builds off the success of Boomerang, which launched in 2015 and creates one-second clips that play back and forth in a loop forever and ever and ever and ever until you flip to the next one. Then, earlier this year, the app added Snapchat-style face filters. Instagram clearly puts a lot of thought into these new effects because they can have a profound effect on the hundreds of millions of Stories interactions that happen every single day.

Right now, Superzoom is still fresh, but the internet’s attention span is short, and the social media masses will soon demand a new digital plaything to keep them coming back. What will it be? Here are some best guesses, but feel free to share your own with us on Twitter or better yet, make a Boomerang of your answer and reply to us to annoy all your friends.

You can instantly make a scene look cinematic by starting with blur, and smoothly transitioning into sharp focus. IG will probably have to use a fake blur effect since tiny smartphone camera sensors aren’t good at making things out of focus, but it’s undeniably entertaining to watch as blurry, colorful blobs transform into your face or your lunch.

This is the favorite of the bunch because it would be so easy for Instagram to do and would enable all kinds of dramatic shenanigans. Your story starts black and then fades into a picture of your dog, and then back out again with the deftness of a student film.

Remember Snapchat’s dancing hot dog? Maybe Instagram can have a dancing burger—or dancing pizza. The options are endless. Instagram’s parent company Facebook has serious VR and AR chops, so populating you stories with digital friends and objects would likely be no sweat. Ooh, maybe a dancing milkshake!

I decided to make a well-looped version of my hotdog fidget spinner vid.

God is dead, and we have killed him pic.twitter.com/jCXxw4cZ02

Slot motion video looks cool, but it requires lots of light and something interesting to happen for it to hold a viewer’s interest. This is the opposite of Boomerang in that it requires the audience to accept delayed gratification. This is another case of “SnapChat did it first,” if it happens.

A sharp subject with a blurry background that mimics a DSLR is the holy grail of smartphone camera effects and Instagram could do it, but it’ll take some work. Right now, the Pixel 2 is the only smartphone with a front-facing camera natively capable of such an effect. Rear-facing cameras are better at it, but taking a selfie with those is just too much work.

Instagram already has a successful collage effect called Layout, which you can use in the main feed. Adding it to the Stories mode adds an extra layer of complexity for the user, but that adds up to sweet app engagement time. Four selfies at once? Sold.

Hey, everybody likes a longshot.