What Would Happen If China Destroyed A U.S. Military Satellite?

To put it bluntly, we'd be screwed 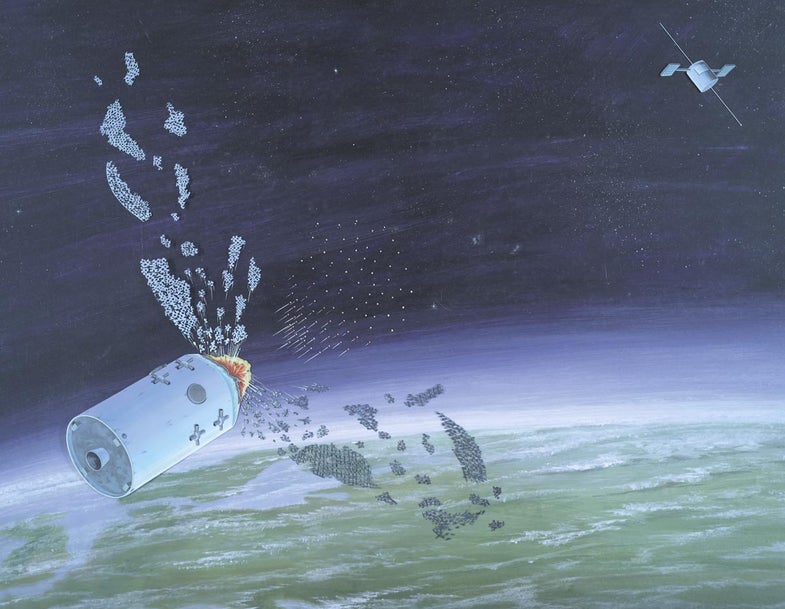 We don't know what Object 2014-28E was. Spotted by satellite trackers, it appeared to come from a Russian military launch. Undeclared at launch, it was thought to be space junk until astronomers could track it moving in a deliberate way. It visited Russian satellites, perhaps repairing them, but others speculate that it was a revived Soviet-era satellite killer, or at least built on previous satellite-killing research. We don't know for sure what it is, but it's probably "a war thing." If so, it's another sign that the Cold War is back on, and it doesn't get any colder than the void of space itself. Concept art from Ronald C. Wittmann, DIA Concept Art, via Wikimedia Commons
SHARE 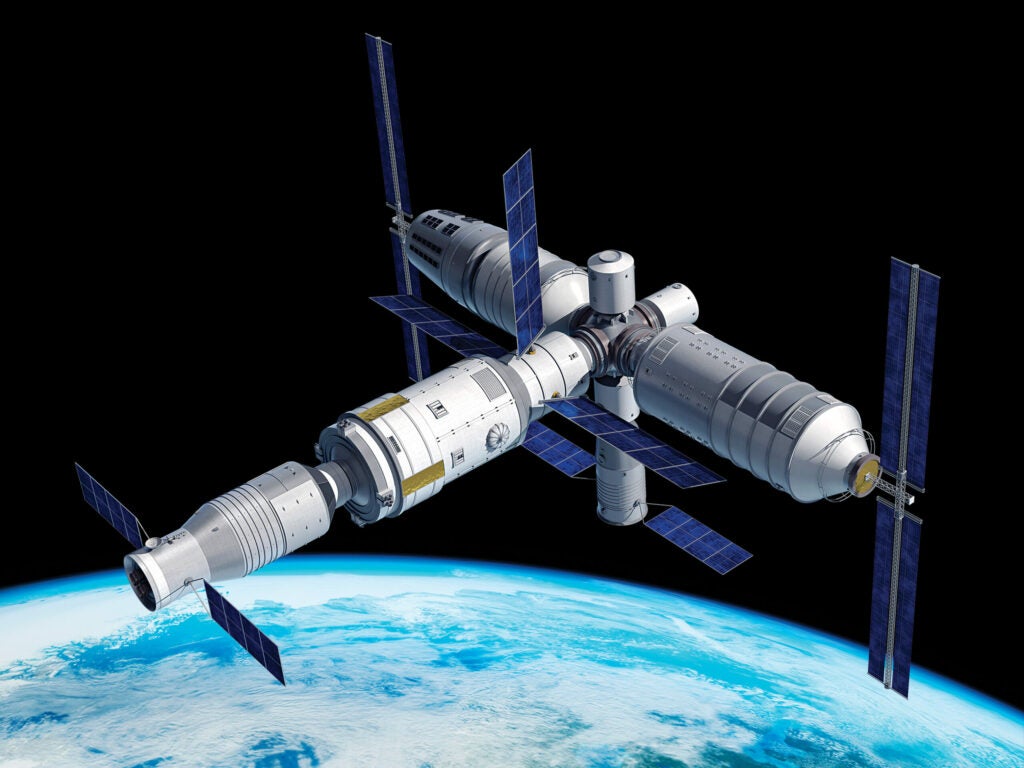 Future wars will be fought at least partially in space. From making sure your ATM transactions work, to enabling military communications, and detecting missiles before they strike, we’re increasingly reliant on satellites. And unfortunately, says Charles Miller from NextGen Space, the U.S. is ill-equipped to defend those fragile spacecraft.

The U.S. and other countries—including China, Russia, and Iran—are developing ways to destroy satellites in Earth orbit. In 2007, China used its anti-satellite system to blow up one of its own satellites. That system’s successor, the Dong Ning-2, is a missile that can target satellites in low-Earth, high-Earth, and even higher geostationary orbits.

What would happen if that missile took out a critical U.S. satellite? To put it bluntly, we’d be screwed. Without a cheap and easy way to get to space, it could take six months or longer to replace a lost satellite. “America risks becoming deaf, dumb, and blind in one fell swoop,” Miller told the Space Frontier Foundation in a recent interview.

NASA is currently in between launch vehicles, and commercial space exploration is still getting revved up (and hitting some snags along the way). Rocket launches are relatively few and far between, and the wait to get a payload into space can take months or years.

“It would be devastating, and there’s nothing right now we can do to prevent it.”

“I suspect it keeps people at the Pentagon up at night,” Rand Simberg, a retired aerospace engineer, told Popular Science. If a U.S. satellite were attacked, he says, “it would be devastating, and there’s nothing right now that we can do to prevent it. The only reason it’s not happening is the same reason we don’t have nuclear war: there are mutually assured destruction deterrents.”

A defense contractor for the government, who wishes remain anonymous, confirmed that the threat is real, and that getting new satellites into orbit quickly would be a significant obstacle.

In a dire emergency, the military could barge to the head of the rocket launch waiting list, or even launch replacement satellites from ballistic missile submarines. In the latter case, “that’s for World War 3 type scenarios,” says space lawyer Glenn Harlan Reynolds.

The better solution would be to have rockets launching all the time, from a variety of providers and from sites all across the U.S., so that it would be relatively easy and cheap to hitch a satellite to one. With routine launches, we could replace a lost satellite in a few days or weeks, Miller estimates.

Making rockets reusable, which is SpaceX’s goal, would be a big step toward lowering costs and making more launches possible. “The way to get cheaper launch systems is to stop throwing the hardware away,” says Simberg. “But that’s not going to happen over night.”

Another strategy is to dispense with the rockets altogether. The military wants its own spaceplane—an airplane that can travel into space. DARPA, the Pentagon’s research department, has contracts with three companies to develop a vehicle that can provide “quick, affordable and routine access to space.”

And with cheaper access to space, companies could afford to send up more rugged satellites. Instead of the lightweight, fragile satellites we use now, they could be armored, to protect themselves against being attacked in the first place, Simberg suggests. 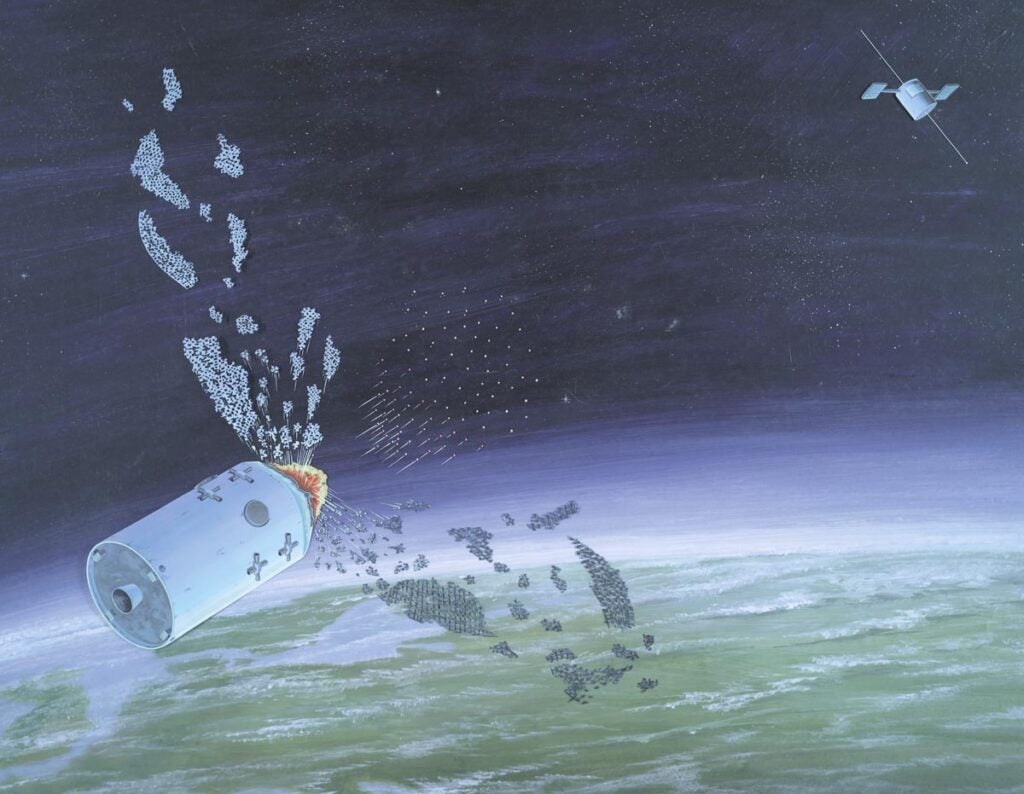 We don’t know what Object 2014-28E was. Spotted by satellite trackers, it appeared to come from a Russian military launch. Undeclared at launch, it was thought to be space junk until astronomers could track it moving in a deliberate way. It visited Russian satellites, perhaps repairing them, but others speculate that it was a revived Soviet-era satellite killer, or at least built on previous satellite-killing research. We don’t know for sure what it is, but it’s probably “a war thing.” If so, it’s another sign that the Cold War is back on, and it doesn’t get any colder than the void of space itself.

But there’s another problem besides launch schedules. Even if getting to space were cheap and easy, it would still be extremely difficult to build a big, complex satellite in a timely manner. Which is one reason why important satellites need to be smaller, simpler, with their functions spread out over many different spacecraft.

The old way of designing satellites was to load up one giant spacecraft with lots of impressive equipment. Take WorldView-3, for example. This satellite has one of the highest resolutions of any commercial satellite in the world–each of its camera’s pixels can capture a square foot of land, so WorldView-3 could spot the home plate at Yankee Stadium from space. Which is pretty impressive, but it took years to build, and it’s 18 feet tall and 8 feet wide. That makes for one easy target.

Our anonymous defense contractor says that the Pentagon is slowly starting to rethink its satellite strategy. Instead of ‘putting all its eggs in one basket’ by creating one or a few very important satellites, the plan is to distribute important functions across many smaller, less important satellites. So, instead of investing in a WorldView-3 type of satellite, they would use a network of smaller, lower resolution cameras—such as DARPA’s SeeMe (Space Enabled Effects for Military Engagements) network of 24 water cooler-sized imaging satellites. That way, if an enemy force (or even just space junk) takes out one of our satellites, the others will still be intact to send back data.

Another way to build a more resilient satellite network would be to work with private companies. SpaceX, for example, plans to launch a global communications network of 4,000 or more satellites, and Airbus is making 900 satellites that would beam Internet from space to Earth. So if a critical military communication satellite were taken out, the Pentagon could potentially fall back on systems such as these.

Getting so many satellites into space, of course, requires easy and cheap access to space—so the two solutions feed into each other. “The ultimate solution is more, smaller, cheaper satellites, going up on cheaper launch systems,” says Simberg.

He estimates that the military could get its critical satellite systems up to snuff in a few years, after SpaceX and the United Launch Alliance (hopefully) conquer rocket reusability.

“When flight rates go up and launch costs go down, that’s going to cause the satellite guys to rethink how they’re doing business,” says Simberg. “But right now, we’re caught with our pants down.”