FYI: What Would Happen If You Shot Off Fireworks In Space?

Good news: they'll explode! Bad news: they might not be the prettiest fireworks ever. 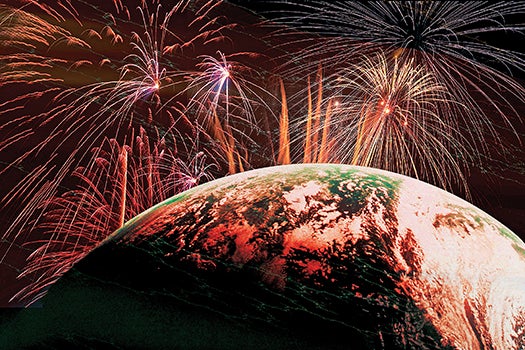 Launching fireworks in a near-zero-oxygen environment is completely feasible, says Stefan Bossmann, a chemist and rocket enthusiast at Kansas State University: “That would be no problem at all. They have an oxidizer, and they have a reductant.” That chemistry is not reliant upon oxygen, and similar reactions are responsible for powering space-shuttle thrusters and other large space-borne rockets.

The trouble would come after launch, when the bursting charge releases and ignites the colorant pellets. The reaction that imparts a rocket’s metals and metal salts with enough energy to change pretty colors requires oxygen. Unless your fireworks were specially designed for bursting in space, their colors would quickly fizzle out. “There may be some color in the initial explosion,” says Bossmann, “but it wouldn’t be half as spectacular as what you see on the Fourth of July.”

Even with space-enabled fireworks, a burst wouldn’t have any thunder. With no atmosphere to propagate sound waves, even the loudest of rockets would be reduced to silence.