Sat spots ships on the seafloor 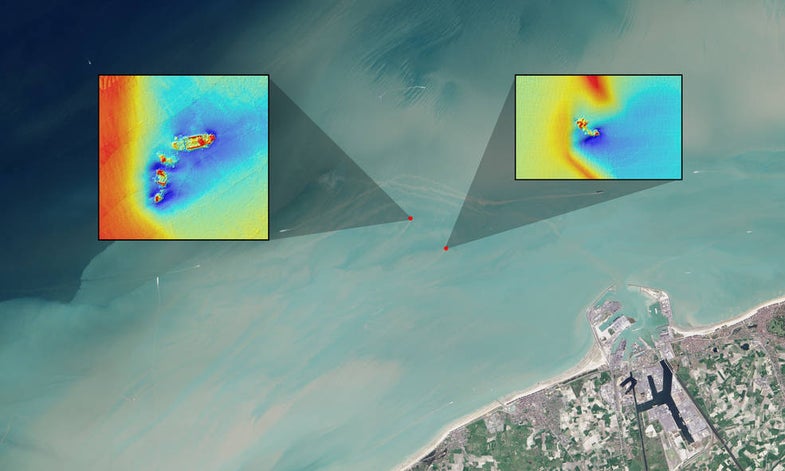 When a ship is lost at sea, it generally stays lost. It might get scattered across the ocean floor, coated with corals or sea life, or buried in the shifting sediments of the sea floor. Some might become agents of destruction themselves, lurking just under the waterline, a hazard to other ships.

Now, a new technique promises to pinpoint the location of a vast number of wrecks, using satellite imagery.

Landsat 8 is the latest satellite in a longstanding NASA/USGS project to observe changes on the Earth over time. A series of satellites have been collecting data since 1972, the “longest unbroken data stream of Earth’s surface as seen from space”. It’s a valuable resource for a variety of researchers, from climatologists to agricultural scientists. Now archeologists are delving into the data.

In looking at locations of four well-known wrecks, researchers noticed that they could spot plumes of sediment flowing from the wrecks in the satellite data. They believe that by looking for these sediment plumes in other locations, they can identify the previously unknown resting places of the approximately three million shipwrecks scattered under the sea.

As an article from NASA notes, there are many reasons to want to find sunken ships, and none of them really involves treasure.

I know, treasure would still be nice.

But locating underwater shipwrecks is important because many of these accidents occur along coasts, in dangerous areas where the added detritus of a wreck only adds to the hazard of life on the water. For better or for worse, shipwrecks can also become part of an ecosystem, sometimes providing new habitat for sea life, or in other cases, leeching pollutants into the water.

Older shipwrecks are also proving useful in extending our climate history. And then there is the coolness factor. Looking at images of ships that have vanished into the depths have a way of inspiring awe for the seas that coat the vast majority of our planet.