Meet Mathieu Mirano, The Science Geek Of The Fashion World 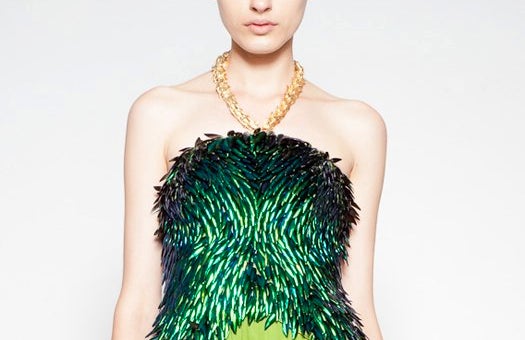 When someone sends me a petri dish invitation to Fashion Week, I’m in.

That’s how I ended up at the Mathieu Mirano show at the Mercedes-Benz Fashion Week in New York City recently. His fall 2013 collection, which he described to the Wall Street Journal as being “about creating life on the way to another planet when we run out of resources on Earth” was quite otherwordly–a black, nude and metallic gathering with some chiffon, leather, neoprene, galactic sparkle, and a skirt studded with ACTUAL METEORITES. Other natural elements included fox and beaver fur, stingray skin separates (not for trypophobes), and a veiny looking sweater and skirt.

Mirano is a geek designer. “Science is a huge part of my inspiration,” he told me. “My dad got his masters in astrophysics and my uncle in botany… and I’m happy that I have that background.” One of his previous collections used Archaeopteryx fossil motifs and real beetle wings as embellishments.

It was all very cool, but I couldn’t help wondering if the inspiration was science, or just nature? And what’s the difference? So, I’ve mulled over it, and this is my proposition: Beetle wings, fur, and stingray skin–they are the stuff of nature. You don’t need any scientific knowledge to grasp them. But a meteorite without science is just a rock. And an Archaeopteryx fossil without science isn’t a species that links dinosaurs to today’s birds, it’s just a bunch of old bones. So, Mirano is definitely putting some science in his work.

Plenty of fashion goes for nature (flowers, animals skins, gems, and Alexander McQueen’s fashion-world famous razor-clam shell dress), but is mostly stuck in a pre-science, pre-microscope, pre-relativity world. It’s shocking to me now that I’ve never questioned why the only science clothes I usually see are dinosaur T-shirts sold on the internet.

Science is effing inspiring! Antibiotics, anyone? Brain scans? Generating power by smashing particles together? Hello! The internet has been techifying our culture at large (note: Diane von Furstenberg’s models who wore Google’s augmented-reality glasses down the runway last fall). Hopefully, with the human genome sequenced and the Higgs boson found, science isn’t far behind.

So, Mathieu Mirano, thanks for reaching across the aisle and dipping into the inspiring gobs of awesomeness on this side. Tell your friends that there’s tons of cool stuff over here. Please, everyone, make lots of prohibitively expensive, science-inspired clothes! And maybe, someday, science fashion will trickle down to the rest of us.

Susannah Locke is a senior associate editor at Popular Science. 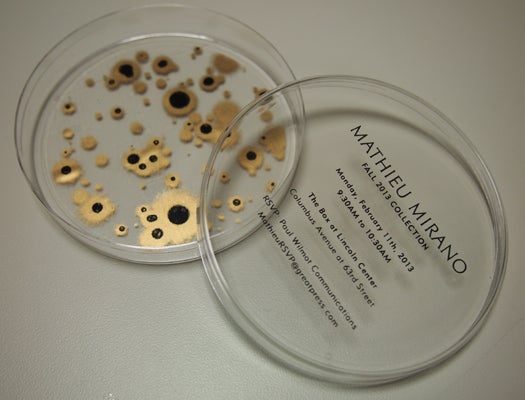 This is the perfect way to get a Popular Science editor to visit your fashion show. 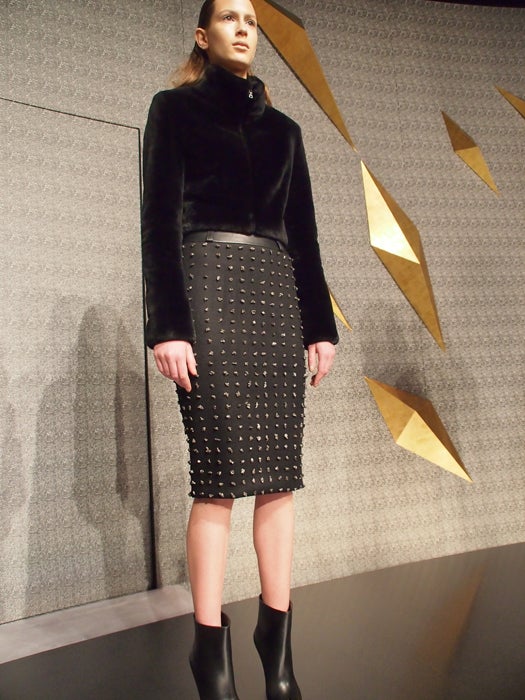 The Model and the Meteorites

“We embroidered meteorites onto a skirt, just to make it really cool and different,” Mathieu Mirano told me. His Fall 2013 collection includes many science- and nature-inspired elements. Yes, the meteorites are real. 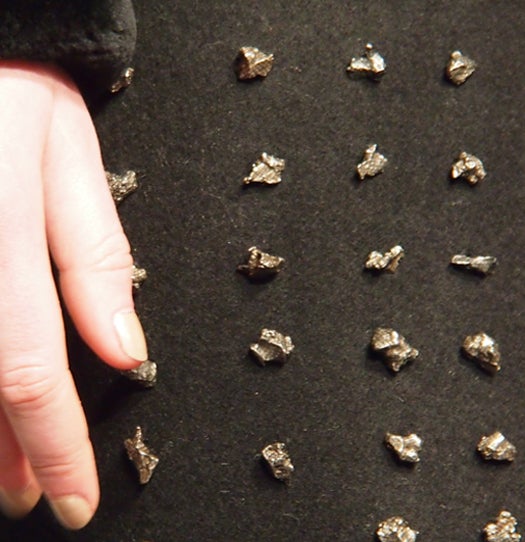 They Came From Outer Space

How do you come by a few thousand meteorites? “We got them from South America, Argentina specifically,” Mirano said. “This guy goes into the desert and picks up the meteorites and just collects them. And we were like, we need all of your meteorites. We need like 7,000 of them.” In an interview with Elle, he said that the meteorites were shipped in oil so that they wouldn’t rust. To use them, they had to burn the oil off. 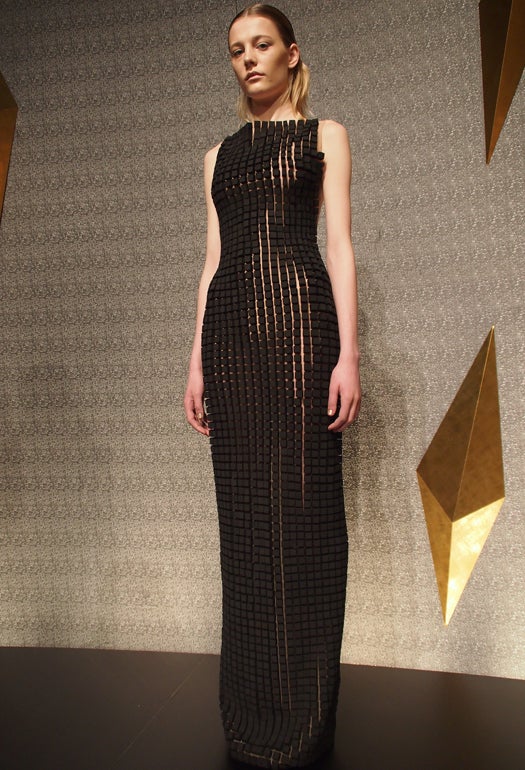 A nude tulle gown with cubes of neoprene, a material that DuPont invented in 1930 and is now commonly used in wetsuits. 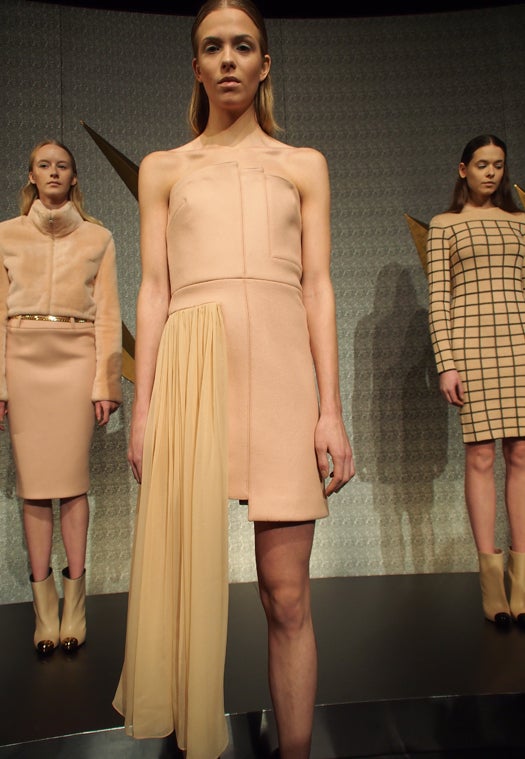 Dressed and Ready for the Generation Ship

There’s something about the future and geometric patterns, right? 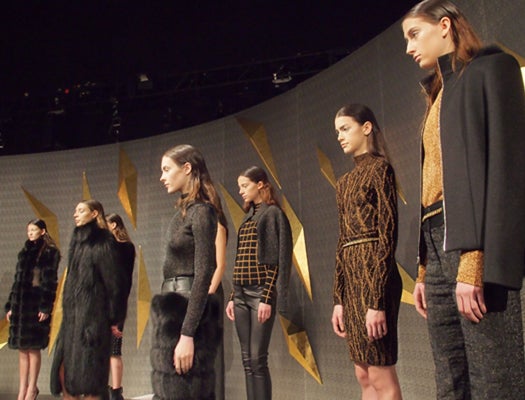 “We’re taking kind of far-off things from nature and bringing them into fashion,” Mirano told me. Here’s a veiny top and bottom, second from right. 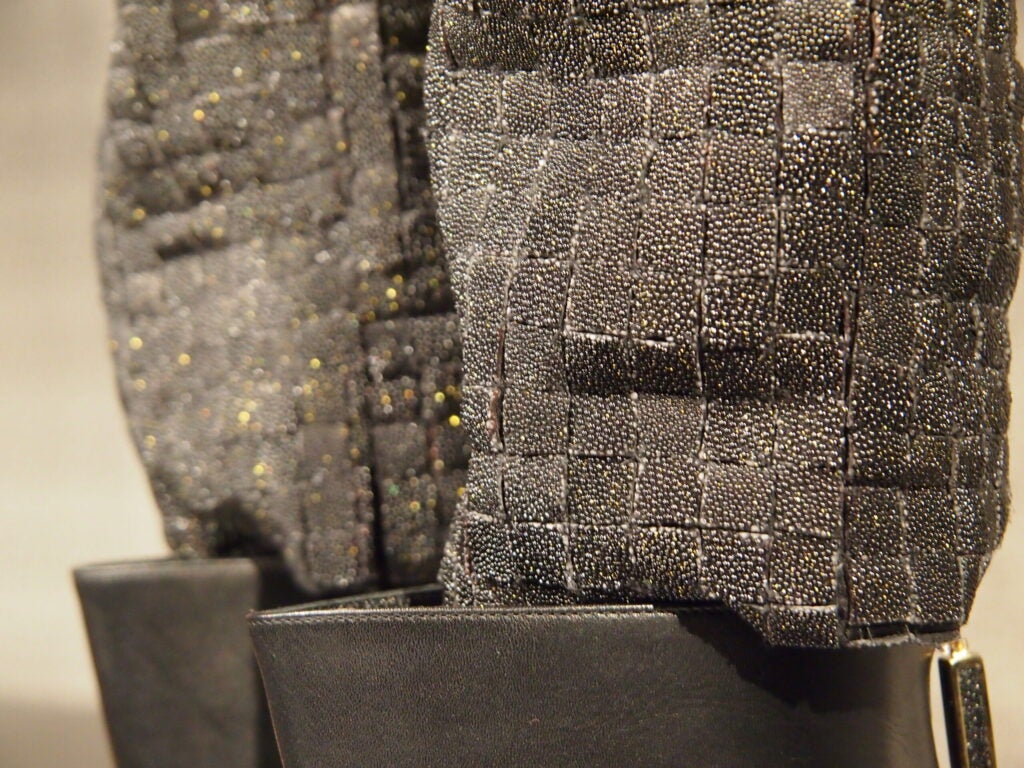 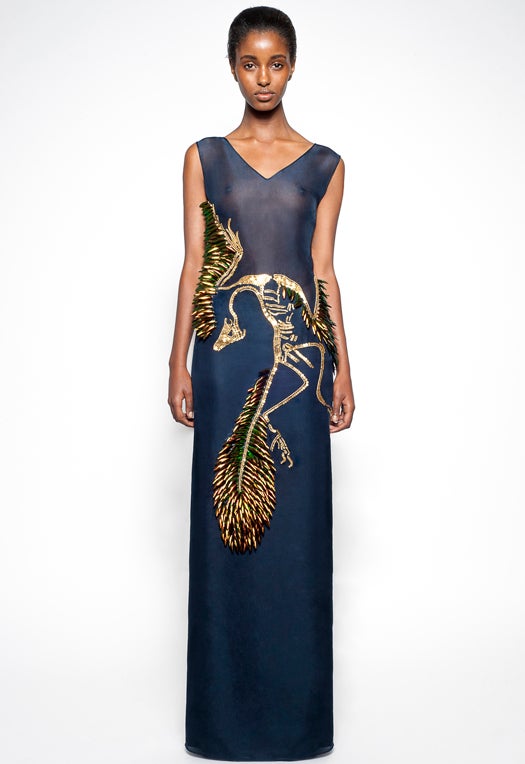 This Fossil Has Been Striking a Pose Since the Jurassic

Many of Mirano’s previous designs also have scientific themes. Here’s a silk organza gown featuring the species that links dinosaurs to our current birds, the a(r)chaeopteryx, which lived approximately 150 million years ago. The dress is embroidered with real red beetle wings (!), gold sequins and gold bullion. It will set you back about $9,000. (Mathieu Mirano Spring/Summer 2013 collection.) 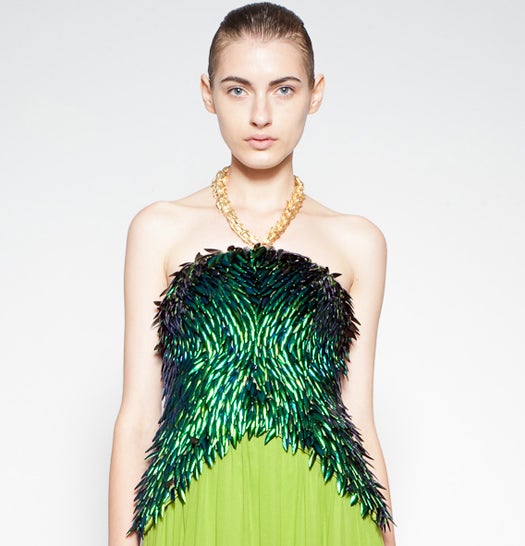 “Last season we covered the bodice of one of our gowns in beetle wings, so that was a really cool element, taking all those natural things and . . . bringing something that’s inaccessible and making it more accessible,” Mirano told me. Here’s detail of the silk chiffon gown embroidered with real beetle wings. Its gold halter strap is vertebrae-shaped. (Mathieu Mirano Spring/Summer 2013.) 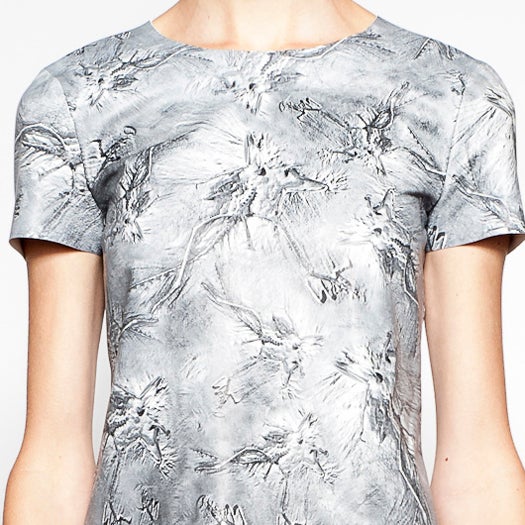 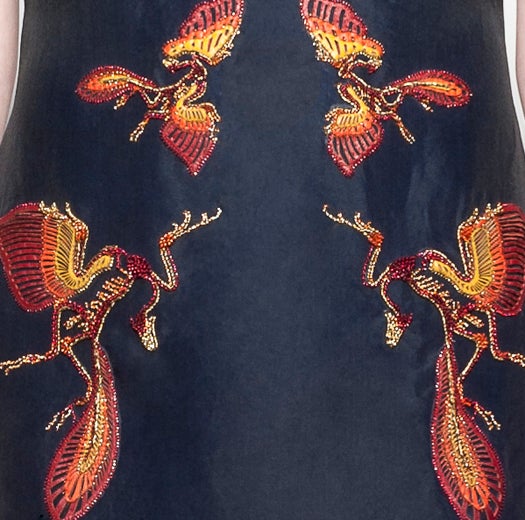 Detail from a gown with leather and beads depicting an a(r)chaeopteryx fossil. The fossils we’ve found of this species indicate that it was blue-jay- to chicken-sized and had claws. (Mathieu Mirano Spring/Summer 2013.)