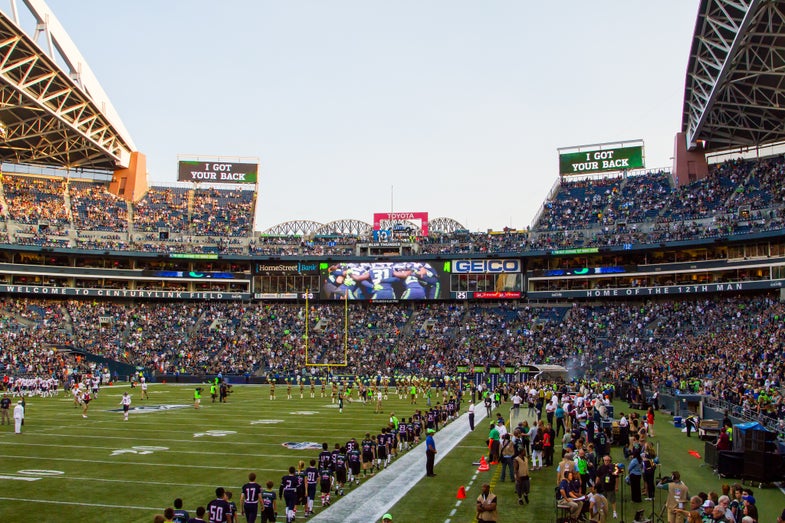 On Saturday, the Carolina Panthers and Seattle Seahawks will meet for a NFC divisional playoff game at CenturyLink Field in downtown Seattle. But while football fans across the country watch the showdown, a team of scientists from the Pacific Northwest Seismic Network (PNSN) will be keeping an eye on a different part of the action–testing an earthquake early warning system with the (inadvertent) help of Seahawks fans.

Back in 2011, a stunning comeback by the Seahawks led to such raucous celebration by the fans in CenturyLink Field that a nearby earthquake sensor picked up on the vibrations caused by the stomping of elated fans. Quickly nicknamed the “Beast Quake” researchers decided to install more sensors to see if they could capture the phenomenon again. With the new sensors active, last year they were able to monitor ‘DanceQuakes’ caused by fans dancing in between large plays.

Now, they want to take it one step further. The scientists already know that fans jumping up and down in that stadium during a touchdown can generate shaking that can be monitored on seismometers–now they want to test new technology for earthquake alerts by keeping an eye on the stadium during a playoff game. They know that if the Seahawks score, there will probably be a shaking event, and they also know lots of people will be monitoring the experiment from home which makes it a good test case for seeing how their system could handle large volumes of traffic in an emergency.

“We’re mostly interested in the speed and the reliability of the communications,” John Vidale, a UW professor of Earth & space sciences and director of the seismic network said in a press release. “It’s hard to simulate thousands of people using this tool all at once. When we can get a lot of people looking, we can see problems that we’d encounter during an actual earthquake.”

And there’s an added bonus. Because the game will be broadcast with a ten-second delay, Seahawks fans keeping an eye on PNSN’s data could know about a score several seconds before they see it on TV.

If you want to keep your eyes on the ground during the game, you can follow a live feed of the PNSN seismic readers via their QuickShake webpage or by following them on their website or social media.