Putting all our options on the table. 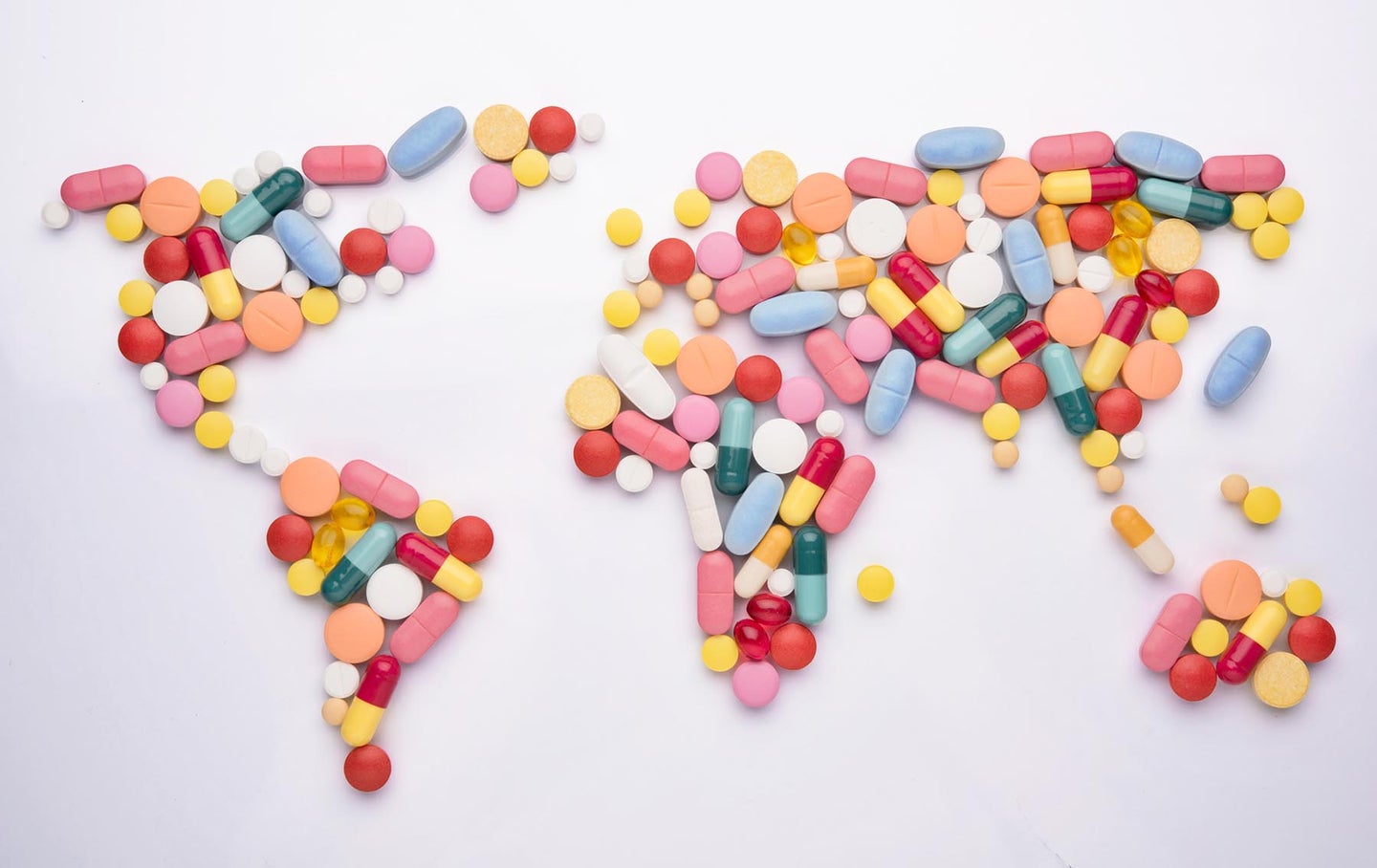 Colistin, an antibiotic discovered in the late 1940s, is not a great drug. Its use comes with a startling list of potential side effects. These include dizziness, severe itching, numbness, and formication—the horrific feeling that insects are crawling on your skin. Oh, and the drug might also make your kidneys fail.

Because colistin’s side effects are so severe, it’s considered a drug of last resort. In recent years, bacteria have developed a growing resistance to antibiotics. When bacteria become antibiotic resistant, the drugs no longer kill the bacteria—so patients stay sick. The more we use an antibiotic, the more likely bacteria are to become resistant to it. But we don’t use colistin very often. Clinicians dole it out only to treat infections that are resistant to safer pharmaceuticals. If it’s a choice between colistin and death, well, the feeling of creepy crawlers on your skin doesn’t sound so bad.

But in 2015, researchers discovered a strain of E. coli bacteria resistant to potent drug. When exposed to colistin, E. coli—a bacteria that can cause potentially deadly infections—didn’t die. Since one of colistin’s main uses is to treat antibiotic resistant E. coli infections, it was a particularly scary plot twist.

The culprit? Bacon. You see, while colistin is rarely used in humans, Chinese pig farmers took to using the drug in animal feed. Antibiotics help the porkers stave off infections in crowded conditions. They also help farm animals gain weight faster, thus making them ready for slaughter sooner. But the practice also put enough colistin into the environment to allow resistant E. coli to evolve. Frequently exposed to the drug, strains of the pathogen with the mutations required to survive it became more likely to breed and spread than non-resistant strains.

“If we keep going on like that, wasting our antibiotics on nonessential purposes, eventually nothing is going to work,” says Thomas Van Boeckel, an epidemiologist at the Institute of Integrative Biology in Zurich, Switzerland.

Van Boeckel co-authored a study released today in the journal Science that tries to figure out the best way to get farm animals off antibiotics. The issue, you see, goes further than colistin in Chinese pigs.

Eighty percent of the antibiotics used in the United States go not to sick humans, but to healthy farm animals. Worldwide, we slip an estimated 131,000 tons of antibiotics into their feed and drinking water. If we do nothing to change our dosage, we will be feeding farm animals 200,000 tons of antibiotics annually by 2030. And we’re already suffering the consequences. Antibiotic resistance is on the rise, making many once-lifesaving drugs as effective as sugar pills. According to the Centers for Disease Control, an estimated 2 million Americans now catch antibiotic resistant infections each year. Of those, at least 23,000 people die. If we’re not careful, we’ll find ourselves back in a world where scraped knees can prove lethal.

Governments agree that this is a problem. In 2016, the United Nations General Assembly convened a high-level meeting on antimicrobial resistance. The present nations, including the United States, agreed to develop practical ways to tackle the issue. That’s where Van Boeckel’s study comes into play.

Van Boeckel and his colleagues analyzed three possible strategies for reducing antimicrobial use in farm animals. First were regulations limiting antimicrobial use. Right now, the amount in use varies depending on location. Norway averages around 8mg of microbial agent per kilogram of animal product, which the authors call a Population Correction Unit (PCU). China uses 318mg per PCU. The researchers found that if the 35 countries that make up the Organization of Economic Cooperation and Development (OECD) plus China were to limit the use of antimicrobials to 50mg per PCU, they could reduce the global use of antimicrobials by 60 percent come 2030. But regulatory approaches involve setting up surveillance systems and systems of enforcement. That costs governments money, and may lead to lax implementation.

Another option? Simple: stop eating so much meat. The authors note that if we lowered our meat consumption to about 1.4 ounces of meat a day, we could reduce the amount of antibiotics used by 66 percent. This is roughly 20 percent less meat than you’d find in your standard McDonald’s hamburger. Right now, Americans consume an average of 10 ounces of meat a day—so 1.4 might not be super realistic. The authors suggest a more realistic global cap of around 6 ounces of meat, which would reduce global consumption of antimicrobials by 22 percent. Eating less meat might come with other environmental benefits, too.

“We’re well aware that these are pretty drastic changes compared to current levels of meat consumption, and we’re not expecting everybody to adopt a very low meat diet tomorrow,” says Van Boeckel. But he and his colleagues want the public to understand how much there is to be gained by limiting antibiotic use right at the source. “If we were not to apply restrictions to antibiotic use, to decrease antibiotic consumption the same amount we would have to eat three times less meat.”

The researchers also looked at what would happen if countries imposed a user fee—otherwise known as a tax—of around 50 percent. So, if a pound of veterinary microbial products are sold for $100, they would cost a farmer $150 under this scenario. They estimate this would reduce global consumption by 31 percent. That’s not as effective as regulation, but carries some added benefits. A tax is easier to put in place, because only a handful of companies actually make these drugs. It’s easier to tax a few manufacturers than to track the behavior of millions of farmers. The fee would also raise money that nations could invest in antibiotic research.

Right now, it takes upwards of a billion dollars for a pharmaceutical company to develop a new antibiotic. Once they’ve created an antibiotic that is safe and effective, there’s still the issue of cost. The company has to sell enough of the drug to cover its research and development. To do that, they could sell very little of it at very high prices ($1,000 dollars a pill, anyone?) or sell a lot of it—as animal feed, for example. This of course means that the drug will lose effectiveness that much faster. Neither option is great, which is why many companies are choosing a third option; they’re getting out of the business entirely. A 2014 Pew Charitable Trusts report found that only five of the top 50 performing pharmaceutical companies do any antibiotic research.

“I’m not here to defend the pharmaceutical industry,” says Van Boeckel. “But there’s a fair point when they say that the current business model for antibiotics encourages them to sell the biggest volume possible.”

We need to find a way to separate the money that a company makes on an antibiotics from how many they actually sell. The revenues raised by taxing antimicrobials could contribute to that effort.

The researchers found that mixing all three options was most effective, with the potential of reducing antibiotic use by 80 percent. But they warn that whatever options governments choose should account for differences across income groups, and other political realities.

What we know for certain is that reduced use is possible. Chicken farms used to be one of the leading consumers of antibiotics. But over the past decade, Perdue—one of the biggest poultry producers in the country—has eased antibiotics out of its supply chain. The company eliminated antibiotics from feed in 2007, and from hatcheries in 2014. In 2016, Perdue announced that it was ending the routine use of antibiotics altogether. They would only give a chicken an antibiotic when it gets sick, which they report happens to about 5 percent of their flock. Perdue wasn’t motivated by altruism, but by the bottom line. Customers were telling the company to get the antibiotics out of their chicken. Where there’s will, it seems, there’s a way.