Tropical Storm Jose may leave the U.S. alone—but it’s too soon to know for sure

The storm's future is still uncertain. 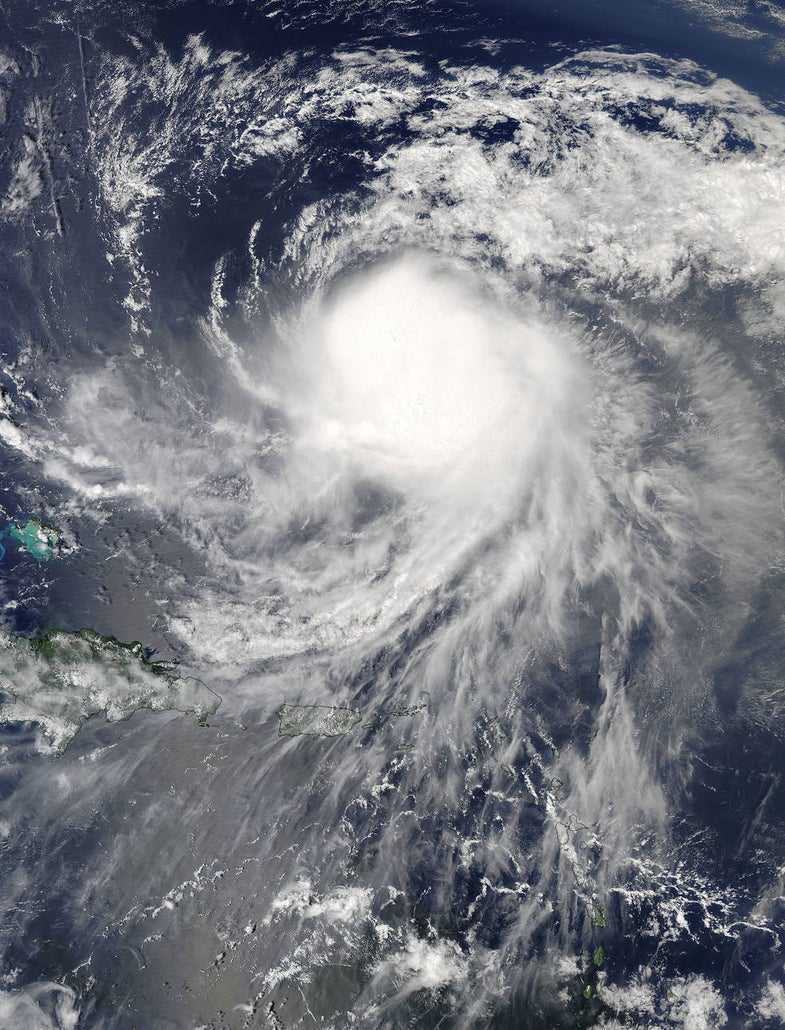 It’s tough on the nerves to deal with one major hurricane, let alone two intense storms making landfall within a few weeks of each other. Thankfully, it’s likely that Tropical Storm Jose will turn out to sea and away from the United States—but it could pose some problems before it makes its final exit.

Tropical Storm Jose is still lingering in the southwestern Atlantic Ocean. A hurricane for most of its life, the storm briefly weakened on Thursday, but forecasters expect it to regain hurricane strength on Friday. This is the same storm that formed not far behind Hurricane Irma, when they were both way out east near Africa. Jose came uncomfortably close to the Lesser Antilles as a category four. The thought of a second catastrophic hurricane hitting the already-battered islands was almost unimaginable, but Jose skirted just to the north of Barbuda and started moving back out into open waters, sparing the islands from a kick when they were already down.

While there was initially some concern that Jose might hit the United States—and maybe even Florida—it looks like that’s unlikely. The same steering pattern that drove Irma into the southeastern United States isn’t available to Jose, so the storm has done some odd twisting and turning over the past couple of days. There are more moving parts in the atmosphere dictating Tropical Storm Jose’s motion than there were when Hurricane Irma went through the area last week.

Irma, which slammed into Florida this past Sunday as a category four hurricane, made its long, steady trek toward the United States as the result of a strong ridge of high pressure over the middle of the ocean. This high acted like a barrier, preventing the hurricane from turning north. It only made its abrupt right hook into Florida when an approaching trough weakened the ridge and allowed the hurricane to turn.

The same trough that impacted Irma continued into the Atlantic and made a mess of the steering currents in the western half of the ocean basin. Jose got trapped in the resulting hodgepodge of winds; the end result is the storm making a complete loop, somewhat similar to the loopy path taken by Hurricane Jeanne in 2004. While Jeanne continued west and hit Florida, meteorologists expect Jose to slowly curve northeast—safely away from the United States.

There is still a chance that the storm could affect Bermuda or Atlantic Canada within the next week. And we’re not completely out of the woods here in the United States, either. Regardless of the storm’s ultimate path, high waves and rip currents are a serious threat along the East Coast as Jose moves by. Rip currents are silent killers. Many beachgoers don’t realize there is one until it starts pulling them away from the shore. Pay heed to rip current warnings from local officials, and watch the ocean for signs of danger. Some clues to keep an eye out for: channels of choppy water, lines of foam or debris moving away from the beach, a break in the incoming wave pattern, and changes in water color beyond the surf (see photos here).

While it’s not likely, there’s always an outside chance that some unexpected change could bring Jose closer to land, allowing it to pose a more direct threat to East Coast residents. It’s the peak of the hurricane season, after all, so it’s wise to keep an eye on forecasts at least once a day in the coming weeks.