During a hurricane, where does all the pig poop go? Into your water.

The horrifying pig poop floods in North Carolina are not a one-time thing. 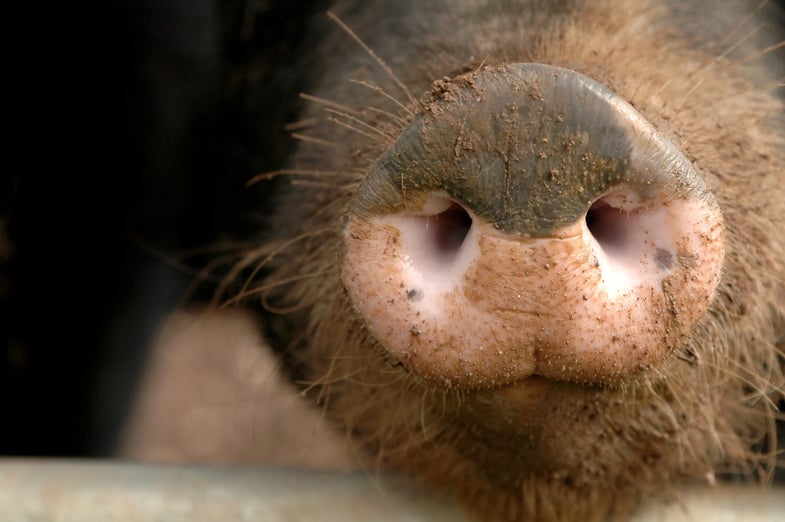 Hurricane Florence inundated at least 54 lagoons full of pig excrement when it made landfall September 14 and unloaded at least 8 trillion gallons of rainfall over North Carolina in less than a week. The record rainfall may be a new one for the history books, but the slurry of hog poop, urine, bristles, dead skin, and bacteria that’s sloshed into the environment is déjà vu twice over.

In 1999, Hurricane Floyd contaminated the rivers, wells, and groundwater of rural eastern North Carolina in animal waste, much of it having escaped from loosely-regulated industrial hog farms. In 2016, during Hurricane Matthew, 14 such lagoons spilled over.

Growers on industrial scale hog farms use massive, open-air lagoons the size of football fields to store hog waste while bacteria (which give the lagoons their dull pink color) break it down and turn it into fertilizer that can be sprayed onto fields. To keep the lagoons from filling to the brim, facilities are required to keep a clearance of 19 inches between the wastewater level and the top of the berm, a gap that’s known as the freeboard distance. All new swine lagoons in North Carolina must be leak-proof, while existing lagoons must be able to withstand a 25-year, 24-hour rain event, or rainfall that has a four percent chance of happening in any given year.

The problem is, that statistical standard has become outdated—particularly because climate change is causing more frequent and intense storms, says Michelle Nowlin, a law professor and supervising attorney at the Duke Environmental Law and Policy Clinic.

Rain and flood water from Hurricane Florence, a 1000-year event, overtopped 31 lagoons, inundated 23, and left 76 in danger of overflowing as of Friday noon, according to the North Carolina Department of Environmental Quality. As of Sunday noon, five lagoons were reported to have structure damage, though the number of flooded lagoons fell to 41, with 57 still in danger of overflowing. (The water has also breached a dam that flooded two basins at a Duke Energy power plant holding toxic ash residues leftover from burning coal.)

When lagoons spill over, they add to the environmental and public health burdens on communities that live nearby. Individual pig growers are responsible for cleaning up the messes on their properties, but local communities bear the brunt of any fecal contamination to their drinking water, Nowlin says.

North Carolina has sandy soil and a high groundwater table. During heavy rains or floods, excess water can easily seep into the groundwater that many people in rural North Carolina tap into for their drinking water. This puts the people who rely on privately owned wells, which aren’t regulated by the government, at risk for microbial infections from pathogens including salmonella, giardia, and E. coli, which live in pig poop and can cause severe diarrhea even in healthy humans when ingested.

To make matters worse, in the days before the hurricane, farmers sprayed their fields with pig waste to make room for more rainwater in the lagoons. It’s likely that after the heavy rains, most of that manure has mixed with runoff into streams and rivers, where an influx of fecal matter can also cause sudden blooms of algae, which feed on the same nutrients that help crops grow. Such algal blooms can prove toxic to the animals that live in those waterways.

“So why would you use something that’s so primitive,” Nowlin says. “It puts the public at risk, even though there are better ways of managing the waste.”

Following Floyd, the state general assembly took some actions to prevent future messes, including banning animal facilities from building new lagoons in the 100-year floodplain, says Nowlin. It also allocated money to farmers to remove lagoons in the floodplain using a “worst first approach.” But the money ran out before all the lagoons could be moved.

The third thing the state did was work with Smithfield Foods, the largest meat-producer in North Carolina, to study and help farmers embrace better waste management technologies, Nowlin says. For example, hog growers can separate solids and liquids into different waste streams, transport manure to a composting facility, use a denitrification system to remove some of the nutrients, or capture methane gas from digested animal waste as a source of energy. But “the industry balked over the cost of retrofitting existing facilities and we’ve been in a stalemate ever since,” Nowlin says.

Although another hurricane has brought public health and environmental concerns over pollution from animal wastes back to the fore, whether there will be any long-term changes in policy remains to be seen.

“The storm has highlighted the costs that meat production imposes on society,” Nowlin says, “I really hope the industry will come together with the communities to adopt these new technologies that will better protect human health, natural resources, and provide benefits for the farmers.”