After the storm comes the swarm (of termites). 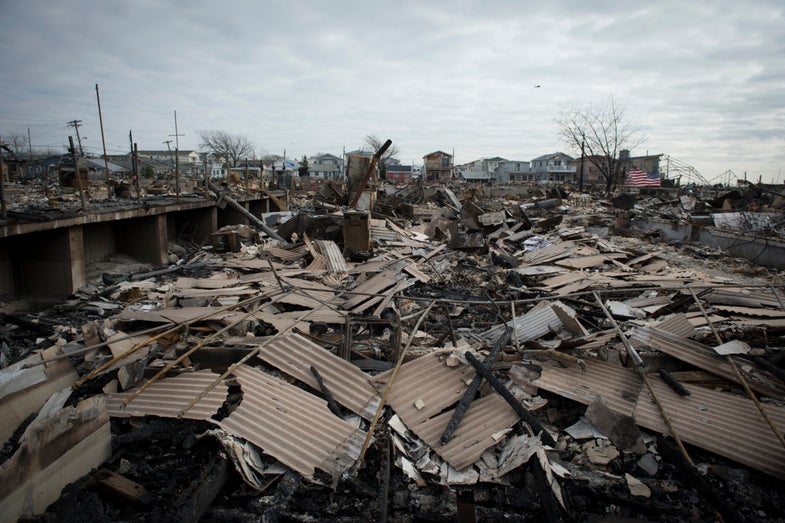 As floodwaters brought by Hurricane Florence subside, homeowners, businesses, and the government face the long task of cleaning up. But as the crews do their work, there is a little-talked-about danger in the aftermath of severe storms like this one — Formosan termites. This invasive species is a plague on homes and structures across the southeast, where decades-long efforts to exterminate and contain them can be undone when the bugs hitch a ride with cleanup crews hauling away storm debris. Some termites — metaphorically speaking — can “hold” their breath underwater for nearly 20 hours, making them uniquely equipped to survive hurricane-induced floods. The Eastern subterranean termite, for example, can last 19 hours, nearly twice as long as the Formosan termite (at 11 hours), or the Southern subterranean (14 hours). They can drown if flood water persists for several days, but most won’t. To be sure, technically, termites don’t breathe the way humans do. Tiny holes in their bodies allow oxygen to come in and carbon dioxide to exit. While underwater, they’re really in a state of suspended animation. The rest of the time, they dwell in soil, tree limbs, tree holes, and in the walls of houses, happily munching on cellulose — in wood, clothes, paper, and furniture — and slowly inflicting lots of damage. A flood or other natural disaster provides more food — from downed trees — and the opportunity to relocate to new homes if the bugs are washed up in soil, if infested wood is transported far away, or if people use it to repair their damaged homes.

In the case of Hurricane Florence, there is also the danger that the extreme destruction caused by the storm’s high winds and flooding will generate huge amounts of debris — up to five to ten times usually produced by communities — posing a challenge for removal and storage, and raising the possibility of spreading termites beyond their usual borders. In recent years, climate change has amplified the spread of disease-carrying insects; it now could be fueling the spread of property-destroying bugs as well.

“We already know that global warming has exacerbated the problem of vector-borne diseases, this could have it branch out to vector-borne damage too,” said Brian T. Forschler, professor of entomology at the University of Georgia. “It is definitely a possibility that if infested debris piles up from Florence — or any hurricane really — and must be cleared, it could end up where the species had never been before. Those collecting and moving this material need to be aware of this.”

It’s important to find isolated locations “far from the built environment, like forests or approved landfills, where there is little chance these insects could reach peoples’ homes,” he added.

In addition to being a post-disaster nightmare, termites also make trouble ahead of hurricanes, weakening trees and houses, making trees easier to topple, and walls easier to collapse. And things will only get worse as climate change keeps fueling faster wind speeds, torrential rainfall and flooding, making hurricanes more frequent and powerful. “The presence of termites before a storm is considered a major contributing factor to tree and building failures,” Forschler said.

For residents of flood-stricken areas already coping with the misery left by Florence — destruction, pollution, and massive cleanup — termite infestation may seem the least of their problems. Nevertheless, this wood-hungry insect may well become a worrisome and potentially destructive intrusion that shouldn’t be ignored, experts said. “Maybe the termite issue should be put on the back burner, but I am an entomologist and the termite issue remains a huge concern in my mind,” said Gregg Henderson, professor emeritus of urban entomology at Louisiana State University.

Forschler agreed. “For example, if people are remodeling their homes after a flood, they could open up their walls and find a lot of damage that termites already have inflicted,” he said. “They will take that drywall down to fix it and find out they have an infestation they didn’t know about. Also, if they use repurposed lumber to rebuild, there is always the possibility the wood is infested. Hopefully, not too many people will be doing that.”

And for those who already knew their homes were infested, and previously treated for termites, the toxic liquid and baits can wash away in floodwaters, “contaminating the water and requiring costly re-treatments,” Henderson said.

The Eastern and Southern termite varieties, as their names imply, are found all over the Eastern and Southern parts of the country, while the Formosan species lives in the Southeast, along the Gulf Coast and in one small region of North Carolina near the South Carolina border. There are healthy populations of the Formosan termite in Georgia, Florida, Alabama, Mississippi, Louisiana and Texas. Global warming could extend their range to the north, where shorter, milder winter conditions will allow termites to establish new breeding territory.

The Formosan “is our most aggressive due to its large population numbers,” Henderson said, adding that they have adapted well to living near waterways by building above ground nests — called cartons — that are connected with their subterranean nests. In a 2008 paper published in the American Entomologist, Henderson raised the troubling likelihood that Formosan termites compromised the levees and flood walls in New Orleans prior to Katrina. Unfortunately, “my observations and opinion of the termites infesting the levees and flood walls were not taken seriously by the Corps of Engineers,” Henderson said.

Since their arrival in the mainland United States after World War II, states have at times issued regulations banning the transport of infested wood to attempt to prevent their spread. At one point, the Louisiana Department of Agriculture and Forestry imposed a state-wide ban, specifically targeting movement of waste wood from homes in New Orleans, and other infested parishes to other parishes in the state, Henderson said.

“One common route for transport was infested railroad ties being used for landscaping, and as parking lot “stops,’” Henderson said. “They were an important reason that Atlanta became infested with the Formosan subterranean termite…the termites that were infesting the transported ties came from New Orleans.”

In Louisiana some years ago, soon after they were discovered, “they also were found infesting the sawmills’ sawdust waste, and people were using this as mulch to be placed around the flower beds at their homes,” he added. “But this was a local issue, and was not a means of infestation to far away states.”

Burning or heat-treating infested wood “appears to be the best way to stop their spread after a disaster,” Henderson said. “One of the first collections of Formosan termites was made in South Carolina in the late 1950s, so we know that Carolinians will have to be dealing with an increased risk of infestation from [this invasive species.]”

The Formosan subterranean termite arrived on the mainland when ships carrying military equipment returned after World War II from the Pacific, where this species is native. Within a few years, they were found in samples collected in Houston, Lake Charles, La., New Orleans and Charleston, S.C.

“They have a couple of attributes that separate them from the native…termites,” Forschler said. “They have the proclivity for building nests, the desire to eat the heartwood in living trees, and — compared to native subterranean termites — they have ten times the number of soldiers in a mature colony. They are small wimpy individuals that gain strength in numbers.”

The one good thing about these and other termites is that they don’t spread disease, “unless you count mental stress caused by entomophobia a disease,” Forschler said.