So many buddies are going to show up in your GI tract. 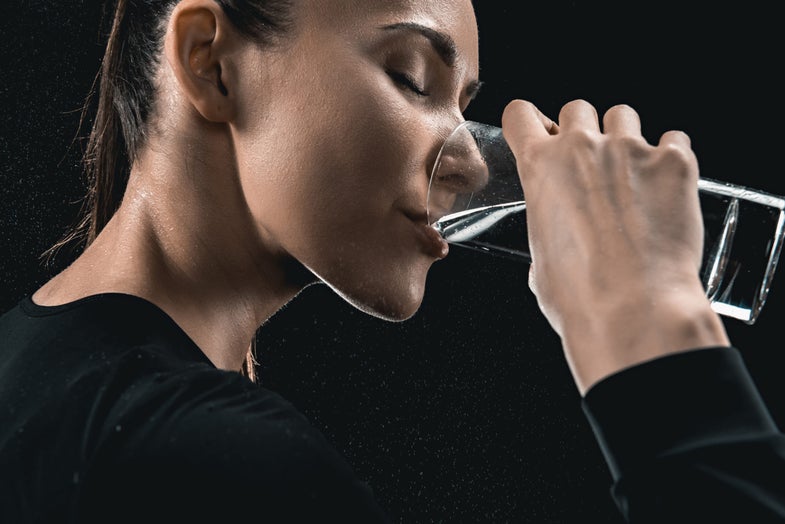 Do you ever feel like your drinking water is just too clean? Last week, The New York Times reported on a trendy new beverage known as raw water. Yes: people are spending loads on unfiltered, untreated, and totally unsterilized spring water.

“It has a vaguely mild sweetness, a nice smooth mouth feel, nothing that overwhelms the flavor profile,” Kevin Freeman, a shift manager at San Francisco’s Rainbow Grocery, told the Times of his store’s au naturale H20. “Bottled water’s controversial. We’ve curtailed our water selection. But this is totally outside that whole realm.”

But drinking raw water isn’t just about flavor and mouthfeel. No, the real joy of sipping Mother Nature’s unfiltered lifeblood is the rich, diverse community you’ll immediately be introduced to. Say hello to a few of the awesome friends you could meet when you drink untreated spring water.

This sassy little lady is sure to impact your life—or at least your bowel movements—in a big way. Giardia is a genus of parasite with a fleet of fashionable flagella that make swimming through your intestines a breeze. Most people only get to meet Giardia after taking a sip from a contaminated stream during a camping trip, interacting with an infected baby or dog’s poop, or dealing with woefully inadequate sanitation and water supply. But thanks to raw water, you could find her right there in your local high-end supermarket!

After taking a few days or weeks to settle into her new home in your GI tract, this pal will give you gas, cramps, nausea, and violent diarrhea. Once pooped out, Giardia stays tucked into a protective little cyst until someone else consumes her—so you can introduce her to your whole family.

Legionnaires’ disease is a severe—often fatal—form of pneumonia. Most people get it from bacterial growth in plumbing systems or air conditioning units, but Legionella shows up in rivers, lakes, and streams as well. The people of Flint, Michigan had a deadly run-in with this infection when water from the Flint river was pumped, untreated, into their homes. They had no choice in the matter, but you can spend upwards of $30 a gallon to get better acquainted with the lovely Legionella.

Who the heck needs to go on a cruise to meet norovirus when you can just invite him into your home? The notoriously contagious virus—which inflames your stomach, intestines, or both to cause such symptoms as diarrhea and vomiting—is spread by poop, so it can show up in pretty much any body of water if there’s a sewage leak (or, let’s be real, a backpacker with norovirus who does his business upstream.) What’s super fun about raw water is that if it’s really never treated at all, norovirus can sneak into the product at any point in its production. When 4,100 people got to party with norovirus in Spain in 2016 because of contaminated bottled water, experts speculated that someone might have vomited somewhere in the bottling factory and then come into contact with the water. Just imagine all the ways norovirus could find its way into your raw water if no one is treating it literally ever! The possibilities are truly endless.

Here she is, boys: the leading identified cause of Guillain-Barré syndrome! Campylobacter bacteria can get into water anywhere that animals might be poopin’, so your odds of running into this friend are pretty good (I mean, how often do you see an animal that’s not pooping). You’ll almost certainly get a fun case of diarrhea, but wait, there’s more! The infection is known to sometimes trigger GBS, a rare autoimmune disorder that can leave you permanently paralyzed. Also, some strains of Campylobacter are now resistant to multiple antibiotics. So you might be hanging out with this one for a long time. Best friends 4 ever.

While all your coworkers are talking about cryptocurrencies, you can get ahead of the trends and start investing in Cryptosporidium, a microscopic parasite transmitted by (you guessed it) poop. It’s amazing how much poop you can consume when you drink raw water. What did we do for all the years when our water didn’t have poop in it? We stopped getting cholera, sure, but at what cost? Crypto can survive for ages outside your body and you keep shedding it even after the characteristic watery diarrhea stops a-flowin’. Also, it can kill the immunocompromised.

You think you know Salmonella and E. coli, but if you think the best way to meet these tall drinks of water is to eat raw eggs in cookie dough—well, you’re just a poseur. You’re actually most likely to get this brand of food poisoning from produce washed with water that happens to contain poo (it’s always about the poo). Guess where else you can find water that happens to contain poo? That’s right: in water! Especially the unfiltered kind.

These are just the buddies you’re most likely to meet on the journey to a totally unfiltered life, but there are so many others you could run into along the way. 780 million people around the world lack access to safe water, and now you can pay to join them. We truly live in the future.