The USDA thinks it has a plan to contain them. 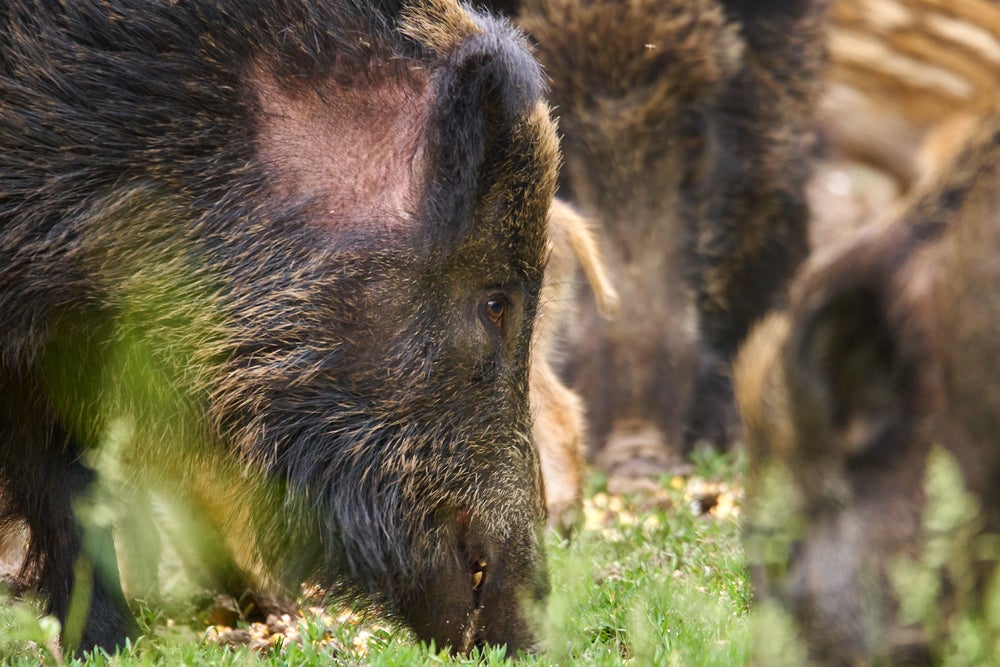 They’re smart, secretive, adaptable—and have an appetite for everything in sight.

That’s why the U.S. Department of Agriculture recently announced $75 million in funding toward a pilot program to control feral pigs. The effort is focused on areas where the hogs are causing the most damage, primarily in the Southeast. But officials in Alabama, Arkansas, Florida, Georgia, Louisiana, Mississippi, North Carolina, Oklahoma, South Carolina, and Texas face significant challenges, not just due to the pigs’ rapid feeding and breeding, but also because of their value as game.

Today, they number an estimated nearly seven million and have established themselves in 35 states (and have been spotted in 48!). According to the USDA, they cause $2 billion in damage every year. “This situation has been described as the greatest emerging wildlife challenge that the United States faces in the 21st century,” says John “Jack” Mayer, a biologist Savannah River National Laboratory who’s been studying wild pigs for over 40 years. “This is something we did to ourselves.”

The pigs’ rooting and wallowing all began in the 1500s, when European settlers brought them to the states for food. Then, in the 1900s, sport hunters imported wild boars. Today, America’s feral swine include wild boar, escaped domestic pigs, and hybrids of the two.

In the 1950s and 60s, says Mayer, wildlife departments promoted pig hunting and sometimes even stocked the animals. Now, they’re the second most popular game animal after white-tailed deer. But even when state officials encouraged sport hunting for the explicit purpose of curbing the tidal wave of pigs, it’s backfired. Hunters love to shoot them so they transport the animals to new areas. Even when the new hunting spots are fenced properties, the swine are notoriously good at digging their way out and escaping.

Once they’re out in the open, feral hogs simply breed too fast for hunters to keep up. To wipe out a population, you need to shoot 60 to 80 percent a year, says Mayer, but recreational hunting can only cut their numbers by about a quarter. And while plenty of non-human predators would enjoy some pork—including mountain lions, alligators, coyotes, and hawks—there are just too many pigs to make a dent. Meanwhile, they thrive almost anywhere between the Arctic and the tropics and females can birth two litters every year. They are “opportunistic omnivores,” which is a fancy way of saying “if it’s got a calorie in it and they can get their mouth around it, they’ll try to eat it,” says Mayer.

This is bad news for farmers, conservationists, and even archaeologists. The hogs literally tear up fields, especially in the Southeast. It’s not just that they voraciously eat anything edible, but they also vigorously root around in the soil as they search for food, leading to their nickname “the rototillers of nature.” They also wreck areas through repeated trampling. About half of that $2 billion in damage is agricultural impacts.

They also trash natural habitats. Perhaps the worst impacts are to watersheds—pigs love living around and rooting through these areas. They also need to wallow in water to cool off. These activities lead to loss of plants, soil erosion, and increased sediment in streams. Swine waste also introduces pathogens and nutrients into water, posing a health risk and contributing to algal blooms and fish kills downstream.

Importantly, feral swine are a vector for diseases that spread to both domestic pigs and humans. That’s not only a public health concern—it could destroy the nation’s livestock. African swine fever is currently devastating the Asian and European pork industry. If it hopped the pond, wild pigs could quickly spread the deadly disease, bringing hundreds of billions of dollars in damage to the pork industry here, says Mayer.

The impacts go on and on. Feral pigs have damaged cultural and archeological resources. On Santa Cruz Island off the coast of California, the National Park Service and the Nature Conservancy moved quickly to wipe the island of pigs after they discovered that the animals had been rooting through archeological sites belonging to the Chumash, a Native American group whose presence in the state dates back as much as 11,000 years. They’ve even been found to eat dusky gopher toads, an endangered species, according to a USDA spokesperson.

That’s why the USDA has poured money into fending off the swine. In a previous effort, they helped fund control efforts in less-densely populated states. Officials used corral-like traps to round up as many individuals of a sounder (a group of hogs) as they could and then euthanized the animals. According to a USDA spokesperson, Idaho, New York, Maryland and New Jersey are now pig-free. Iowa, Minnesota, Washington and Wisconsin are nearing success, too. 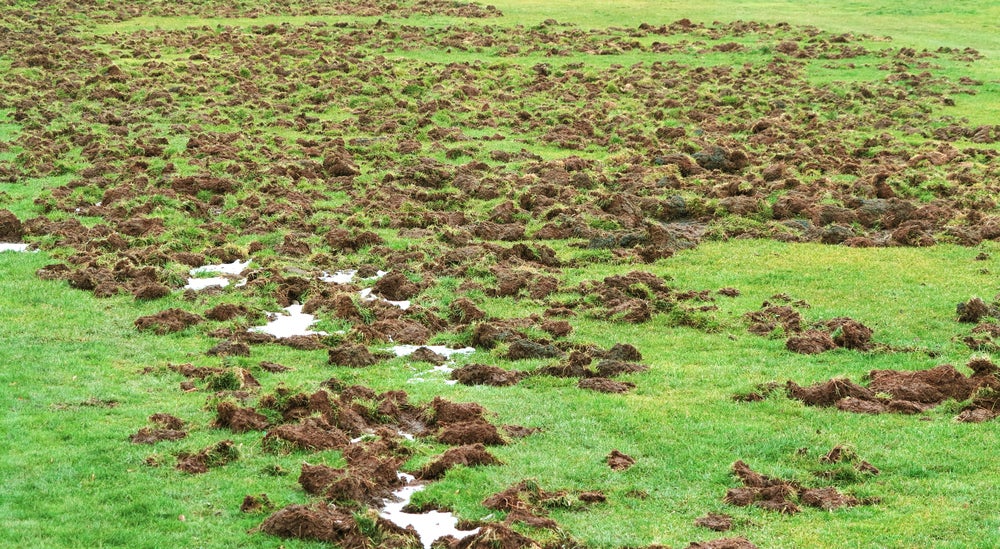 Field dug up by wild hogs

But the Southeast is another scenario. “I don’t know that the Southeast is solvable,” says Mayer. Not only are feral pigs long-established and numerous, he says, “People in the South, they grew up hunting wild pigs, it’s a part of the culture.”

In the new effort, a lot of the funds will go to local soil and water conservation districts, which will work with USDA officials to implement trapping and shooting efforts. In addition to the corral traps, aerial shooting is also a popular control measure. In the early spring in Louisiana, before trees have leafed out, officials fly in helicopters and gun down hogs, says John Pitre, the state’s resource conservationist.

But since pigs like densely-vegetated marsh habitat it can be hard to track them down. So, in what’s called the “Judas pig technique,” officials capture a hog and equip it with a tracking collar. They then free it and let it betray the whereabouts of its sounder.

To stop the swine’s destruction, officials might need additional tools. Though not in use yet, scientists are developing contraceptives and toxins that would target the pigs. The challenge is ensuring that these measures only affect pigs. Feeders laced with such chemicals need to be only accessible to pigs and not other wildlife. And toxins need to degrade quickly, so that hunters or animals that eat the pigs aren’t harmed.

But measures to control the pigs aren’t always appreciated. After announcements of eradication efforts, game biologists in the Southeast have had their tires slashed and received death threats, according to Mayer. In states like Louisiana, AKA Sportsman’s Paradise, “the bulk of the population enjoys hunting and fishing,” says Pitre. So people aren’t happy with their pigs getting taken away.

Wild hogs are also big business, says Mayer. In some states, including Texas, Oklahoma and Florida, ranchers can round up the animals and sell them to government buying stations, after which the animals are slaughtered and the meat sold. If you’ve ever eaten a “wild boar” pulled pork sandwich, chances are that’s where the meat came from. In Texas, ranchers are making a killing off of charging hunters to fly in a helicopter on their property and shoot wild pigs, says Mayer.

Hunting the pigs for food might seem like a way to at least recycle the animals instead of letting their carcasses rot away, but it’s created an industry that relies on their continued existence. In Texas, although some 25,000 to 30,000 pigs are killed annually, that’s nothing compared to an estimated population of over two million. Some states have banned sport hunting or even possession of feral pigs for that reason. “We’re not going to barbecue our way out of this one,” says Mayer.