Your Farts Could Tell Your Doctor About Your Digestive Health

Finding out which microbes dealt it The quantity and diversity of bacteria that populate the human gut is truly mind-boggling; there are over 10,000 species of microbes, and for every human gene in your body, there are 360 microbial genes. Researchers are just starting to understand the importance of these microbes to our digestion. In an editorial published today in Cell Press, a team of Australian researchers argue that doctors should be spending more time analyzing patients’ gaseous byproducts (you may know them as farts) to better understand their digestive health.

Researchers have known for some time that the concentrations of various gases in the digestive tract can shed light on possible medical conditions like Irritable Bowel Syndrome or food allergies like lactose intolerance. In the past, though, doctors have been limited to breath tests, which, the authors say, don’t give an accurate glimpse into the types or concentrations of gases in the intestines.

The researchers suggest two tools to better capture the gases of the gut microbiome. In the first, a doctor takes a fecal sample from a patient, and then places the sample in a non-oxygenated capsule. As the bacteria ferment and release their characteristic gases, a sensor documents their type and concentration before they are released from the chamber. 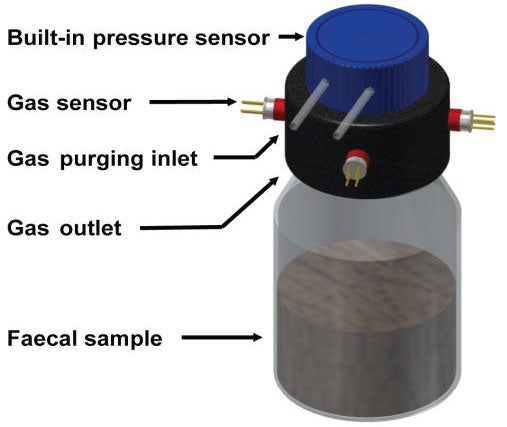 This is a schematic of a real-time in vitro fecal fermentation gas-sensing system.

The second is a gas sample taken directly from the gut. A patient swallows a gas capsule, about the size of a pill, which analyzes a sample of the gases once it reaches the intestine. It wirelessly transmits data back to a doctor’s computer for analysis. 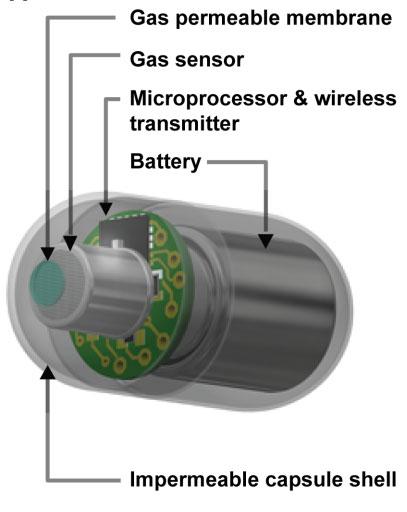 This is a schematic of a swallowable gas capsule.

Collecting more accurate samples of intestinal gases could give doctors a better insight into the microbiome, enabling them to prescribe better treatments for gastrointestinal conditions.