Why archaeologists are arguing about sweet potatoes 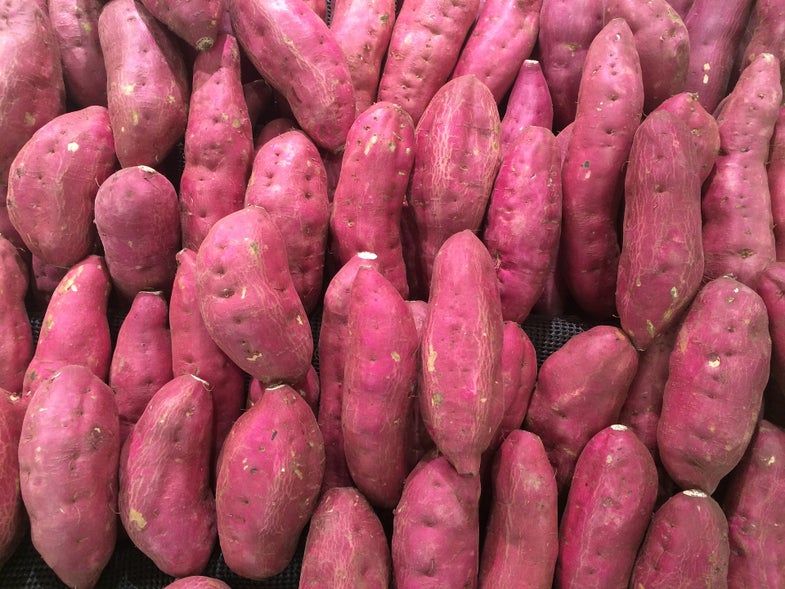 At some point, sweet potatoes crossed the Pacific. This much we know. As for the rest—How? When? Why?—we’re just not sure.

Or, to be more clear, some people are sure they’re sure, and others disagree.

Sweet potatoes have been at the center of a massive archaeological debate for many decades now, and a new paper in Current Biology has only stoked the flames. It uses genetic data from sweet potatoes and their relatives to establish a phylogenetic tree of their evolution, thereby demonstrating that the tubers existed in Polynesia before humans lived there.

But let’s back up for a second. Why do we care so much about sweet potatoes?

The debate about sweet potatoes is, in a way, a debate about human contact (though to be honest, it’s also definitely about the taters themselves). Before Europeans colonized much of the world, native people on both sides of the Pacific traveled fairly long distances across the ocean. South Americans made it all the way out to the Galapagos Islands, which are upwards of 620 miles off the coast of Ecuador. Pacific Islanders, including the predecessors of modern-day Samoans, Tongans, and Maoris, also managed to spread across the myriad dots of land scattered around their patch of the ocean. Those islands, especially the much-larger New Zealand and Australia, are hundreds or thousands of miles apart, which means Pacific natives regularly ventured across the ocean to explore new lands.

All these people clearly shared an affinity for the sea and serious ship-building skills. But they also shared a love of sweet potatoes. They’ve been a core crop for thousands of years, predating Columbian-era exploration. But…how? Sweet potatoes originate in South America, which is thousands of miles away from most of Polynesia.

There are three basic ways this could be possible:

Again: it’s still not clear which of these is true, but archaeologists have used sweet potatoes as evidence to show that Polynesians and South Americans either definitely did or definitely did not have contact for years now, with varying views on who traveled in which direction.

Apart from historical accounts from native peoples themselves, there’s mostly no evidence either way for South Americans versus Polynesians doing the carrying—there’s just evidence for human transportation versus natural spread. (The accounts themselves suggest that Polynesians may have been the ones to venture out, returning much later with tater in tow.)

One key puzzle piece: what words we use to identify the tuber. Since sweet potatoes definitely originated in South America, researchers looked at the terms for the vegetable in use by native peoples, then examined how those terms compared to the words used in Polynesia and East Asia. In South America, for example, sweet potatoes are called kuala, kumara, cumal, and other words that bear a striking similarity to the terms used in much of the Pacific Islands: umala, kumala, kumara, and so on.

Central Americans called them camote or camotil, which is nearly identical to the terms used in East Asia (kamote, camote). In the Caribbean, sweet potatoes went by Spanish words: batata or aje, which is what they’re called in New Guinea and nearby islands.

These linguistic differences don’t precisely mirror sweet potato introduction, since old names can continue to apply to new varieties (in other words, you might name a delicious new treat after something pretty similar you’re more familiar with), and we know that the tubers were actually brought west multiple times—European explorers definitely brought some over.

Regardless of how many introductions there were, these patterns would all necessitate direct contact between native peoples on either side of the Pacific. But not all researchers agree. Just because the words are similar doesn’t mean that the initial introduction occurred between those two people—languages evolve, after all.

The recent paper in Current Biology argues that DNA evidence suggests the Pacific Island sweet potato family branched off from the American one long before humans were sailing. Thus, the seeds or the veggies themselves must have floated their way across the ocean.

This actually isn’t as crazy an idea as it sounds. It’s the primary way that biologists think coconuts spread from island to island—the coconuts float from shore to shore. One 2008 study actually modeled the possible paths from South America to various islands, based on observing ocean currents, to see whether it was even feasible. The answer: a resounding “yep!” Over the hundreds upon hundreds of years that sweet potatoes could have traversed the ocean, seeds certainly might have floated along with currents and found new homes on other islands. It’s still uncertain whether sweet potato seeds remain viable after the minimum 120 days that the researchers estimated the journey would take, but the theory remains feasible.

This new paper shows that DNA from sweet potatoes and related crops suggest that early specimens collected from Polynesia must have diverged from other tubers more than 100,000 years ago, long before humans would have been sailing across the ocean. Even the earliest estimates of people-based transportation put it circa 1000 CE, or possibly a few hundred years before that.

Previous genetic evidence had actually argued the opposite. A PNAS paper from 2013 used DNA from chloroplasts (the little organelles plants use to convert sunlight to energy) to show that sweet potato lineages have actually been recombining across islands and oceans for a long time with human help. The more recent paper argues that chloroplast DNA isn’t necessarily an accurate way to estimate phylogeny, since chloroplast genomes can mix between species in ways nuclear DNA can’t.

Whatever the reality, the archaeological debate on human contact across the Pacific will likely rage on, with sweet potatoes remaining at its heart—and in all of our hearts, really. Long live the sweet potato and all its varieties. Long live the tuber.