FYI: Why Do We Crave Greasy Food When We’re Hung Over?

In part, we’re really just going back to our caveman roots. 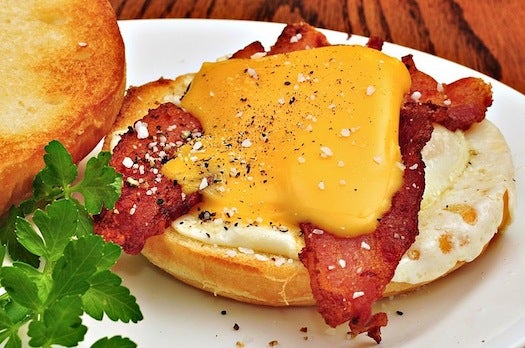 The desire to eat high-fat foods after drinking too much is rooted in human’s earliest, humblest beginnings, some scientists say.

“All mammals gravitate to eating the most energy-dense foods,” David Levitsky, professor of human ecology and nutritional sciences at Cornell University, says. “Fat is the most energy-dense food available.” It’s just that sober, you won’t usually give in to those cravings. But after a night of boozy indulgence, you lose such learned inhibitions as disciplined eating, Levitsky says.

William Gruchow, a professor at the University of North Carolina at Greensboro, has studied and written about galanin and its effects on various neurotransmitters. “Galanin increases appetite for fats, and consumption of fat causes more galanin to be produced,” Gruchow said. “Alcohol intake also results in increased galanin production.”

Gruchow says he thinks galanin might be stimulated by triglycerides, which are released by fat and alcohol.

Triglycerides, converted calories stored in fat cells, are typically released by the body when energy is needed between meals, according to the Mayo Clinic’s website.

“The bottom line here is that alcohol intake increases one’s appetite for fat, and fat intake does the same. This is a double whammy for drinkers who eat fatty foods while drinking,” Gruchow says.