Arrr! Did Captain Kidd Hide His Gold In An Ox-Swallowing Underground Vault? 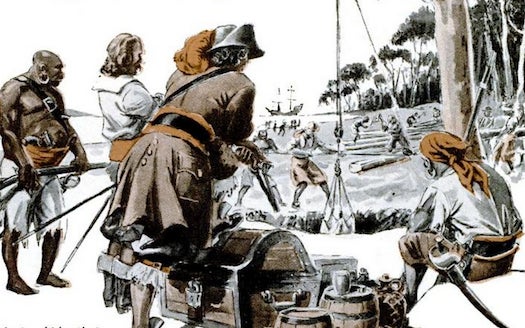 (In honor of International Talk Like a Pirate Day, this story from the April 1939 issue of _Popular Science has been carefully translated from land lubberish.)_

The year were 1795. Three meddlin’ lads were huntin’ on Oak Island, off Nova Scotia, when they happened upon a beastie o’ a tree with a limb hacked right off:

The top of this stub was deeply scarred, as though by running ropes or cables, and beneath the limb the boys found a circular depression in the sod, roughly a dozen feet in diameter.

The next day, they returned with picks and shovels. Pirate lore of the region centered about Mahone Bay, and they were certain they had stumbled upon buried loot. Ten feet below the surface, they struck a heavy platform of hewn timbers. Below it must lie doubloons and pieces-of-eight! But when the wood was removed, only more earth was found below. At twenty feet, they struck another platform.

And so the scurvy louts kept diggin’, hoistin’ up clay in buckets til they reached another platform. Soon winter blew in and the scallywags had t’ give up their quest. 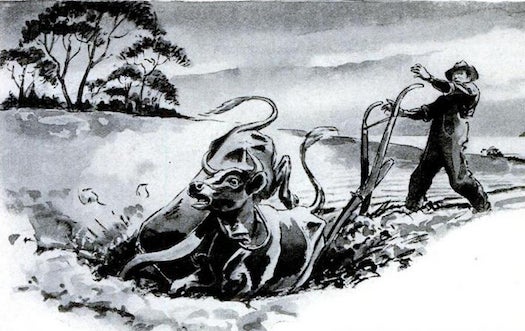 While a farmer was plowing near the beach, the ground gave way and his oxen fell into a deep, hidden pit

The skeptical mainlanders rejected the boys’ story as a hoax and refused their help. Unable to proceed alone, the three bided their time. Two married, settled down on Oak Island, and brought up children within sight of the mystery pit. It was when one of these children was born that a physician from Truro, N.S., a Dr. John Lynds, became interested in the island. He organized the first Oak Island Treasure Company. Together with a group of his friends, including the original discoverers, he began operations in 1803.

As the workman descended, they found some marker or platform at every ten feet… Forty, fifty, sixty, seventy, eighty, ninety feet, the pit continued downward.

When the intervenin’ mongrels went home fer the night, a peculiar thing happened. The bloody pit filled up with 60 feet o’ water!

Later shafts, sunk by other treasure seekers, have told the same story. Only in the immediate vicinity of the money pit is the endless flow of water found.

Baffled by this mystery, the 1803 company exhausted its funds and ceased operations. Nearly half a century went by before a second treasure company, in 1849, began afresh the search for hidden gold. 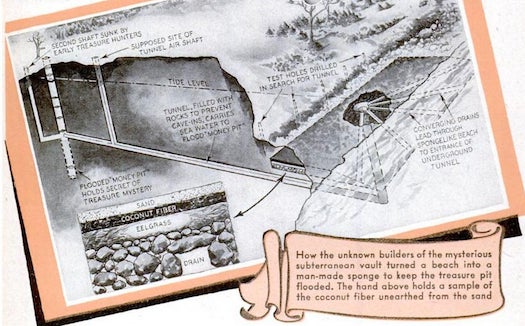 Using the tools of modern science, treasure hunters will attack a strange subterranean vault on a mysterious island

That’s when the thievin’ blighters were joined by the mangiest, saltiest bilge rat o’ them all: a coal prospector! The pox-faced lubber brought along a horse-powered drill to aid in disturbin’ the pirate vault.

Boring down through the mud of the water-filled shaft, the drill struck the platform at 100 feet, bringing up chips that showed it was made of spruce. Then, it dropped twelve inches and began boring through four inches of solid oak. Beyond the oak, it passed through twenty-two inches of what appeared to be loose metal – which the treasure seekers were sure was golden coins. 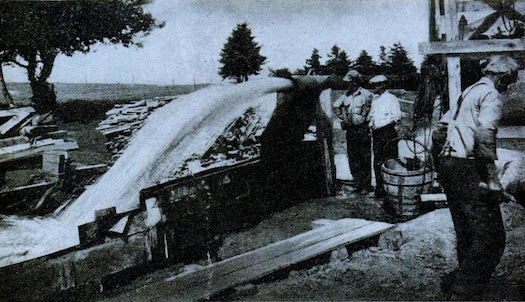 Sea water being pumped from the pit. Powerful electric pumps will battle the inrushing tide

Arr, but ol’ Cap’n Kidd’s loot wasn’t t’ be had that easy. Convinced they had finally found the booty, the larcenous sluggards brought in great pumps from the mainland t’ try t’ drain the watery pit.

Enormous quantities of water were drained away. Yet the level in the shaft remained the same. They then discovered that they were, in effect, trying the bail out the sea. The water was salty and the level in the pit rose and fell with the tides. In some mysterious way, the pit was connected with the ocean water around the island. The mystery island is one of about 350 dots of land in Mahone Bay, once famous as a lair of pirates

Avast! Read the rest o’ the tale at yer own peril, in our April 1939 issue: Captain Kidd’s Gold?.