Farm Robot Learns What Weeds Look Like, Smashes Them

Weeding with machine learning, not herbicides 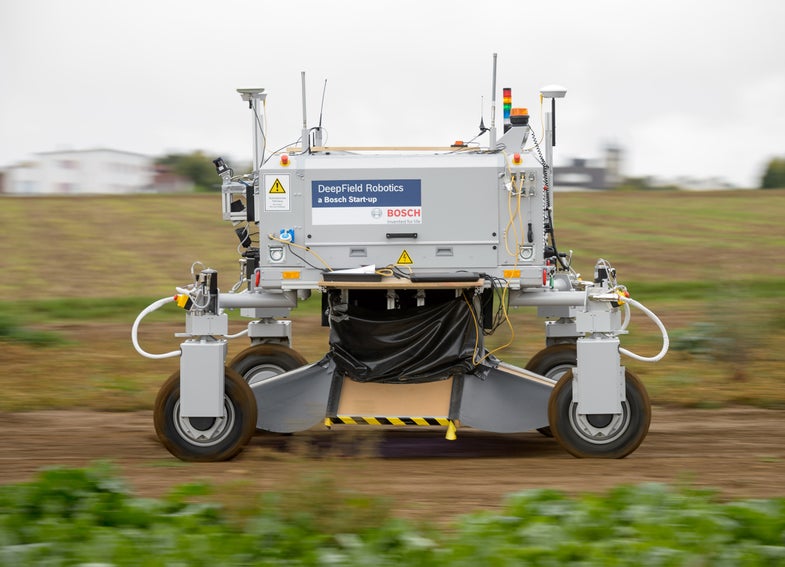 Bonirob, developed by Bosch’s Deepfield Robotics, is billed to eliminate some of the most tedious tasks in modern farming, plant breeding, and weeding. The autonomous robot is built to be a mobile plant lab, able to decide which strains of plant are most apt to survive insects and viruses and how much fertilizer they would need, and then smash any weeds with a ramming rod.

How does it know? Bonirob employs a type of machine learning (a stab at artificial intelligence) called decision tree learning. Researchers show Bonirob lots of pictures of healthy leaves that are tagged to be good, and pictures of weeds that are tagged to be bad, and the machine makes a series of choices based on observed in new data to judge whether a plant in the field is good or bad. Those algorithms are tweaked as the machine collects its own new images.

“Over time, based on parameters such as leaf color, shape, and size, Bonirob learns how to differentiate more and more accurately between the plants we want and the plants we don’t want,” says Amos Albert, general manager of Deepfield.

The robot’s weeding mechanism (a.k.a. ramming death rod) is meant to structurally destroy weeds so that desired plants have a growth advantage. In carrot cultivation trials, the death stick was more than 90 percent effective, according to Deepfield communications lead Birgit Schulz. It’s also completely mechanical, which means no herbicides.

Crops like carrots usually require hand-weeding to ensure an optimal harvest, traditionally done by farm workers. Schulz says that a fleet of Bonirobs could share data about which areas need more weeding, and make the process even more effective.

Bonirob is now available as a researcher platform, but farmers will have to wait a little longer. (Although German Chancellor Angela Merkel got a chance to see what it could do this month.) Deepfield claims that within 20-30 years, Bonirob could change farming as we know it completely.