It's the largest trial yet exploring psychedelic treatment for alcoholism. 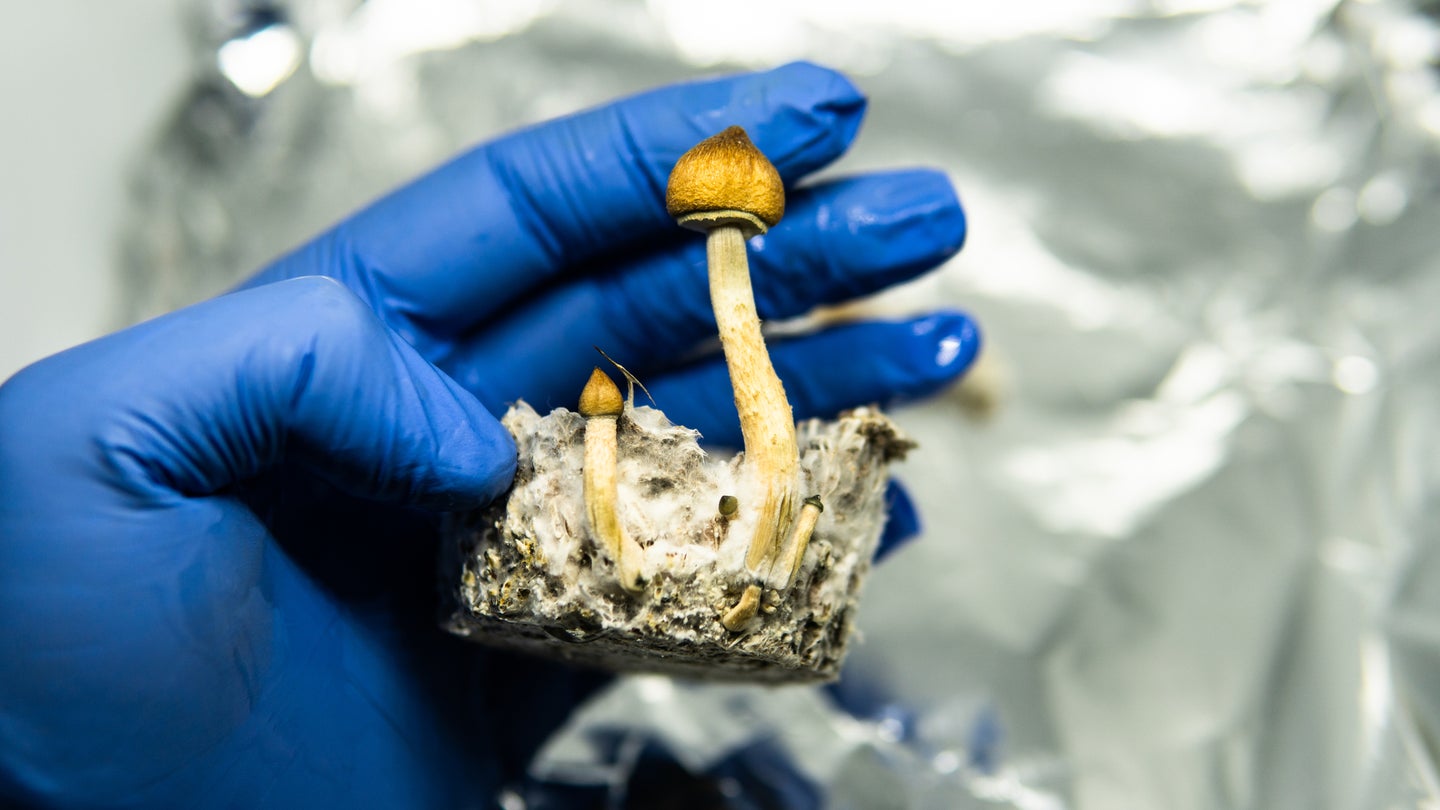 Mushrooms like these are the source of psilocybin, which in a new trial helped patients with alcohol use disorder. Deposit Photos
SHARE

Psilocybin, the psychedelic compound that causes the trippy effects of magic mushrooms, could help people with alcohol use disorder drink less and potentially quit altogether. A new clinical study published August 25 in JAMA Psychiatry found that two doses of psilocybin combined with psychotherapy reduced the amount people drank compared with people who only received psychotherapy. Psilocybin’s effects persisted for at least seven months after the second dose, suggesting it could be a potential long-term treatment for alcohol addiction.

“The findings are promising and exciting,” says lead study author Michael Bogenschutz, director of the NYU Langone Center for Psychedelic Medicine. “We saw large and very persistent effects that could help us find out what place psilocybin will play in the treatment of alcohol use disorder and potentially co-occurring mood and anxiety disorders.”

Though it enrolled fewer than 100 people, the trial “represents the largest psilocybin study to date, and the relatively robust outcomes in both overall drinking, and drinking-related behaviors in a study of this size are therefore noteworthy,” says James Giordano, professor of neurology and biochemistry at Georgetown University Medical Center who was not a member of the research team.

The Food and Drug Administration does not approve psilocybin as a treatment for any disorder. But in the past decade, a growing scientific movement has explored possible mental health benefits of psychedelics. Psilocybin, most notably, has shown to provide immediate and long-term relief for people with depression. Research suggests psilocybin’s effectiveness increases when combined with therapy, especially for treatment-resistant depression. The current trial tested psilocybin’s health benefits towards another condition: alcoholism.

About 14.5 million people in the US have alcohol use disorder; alcohol is the third-leading preventable cause of death among Americans. Heavy drinking rates have also soared during lockdown, with an increased 25 percent of alcohol-related deaths in the first year of the pandemic. While some medications and psychotherapy can effectively manage alcohol abuse, Bogenschutz says their effects are small. Only one person out of 60 with alcohol use disorder actually seek medical treatment.

The new randomized, double-blind clinical trial is based on the results of a 2015 pilot study led by Bogenschutz, in which his team tested the effects of two doses of psilocybin plus psychotherapy on 10 participants with alcohol dependence. While the previous study was not well-controlled, Bogenschutz observed that the treatment substantially decreased people’s drinking and there were no noticeable safety issues.

[Related: Is Dry January the best way to cut back on drinking?]

To build off those results, the researchers enrolled 93 men and women diagnosed with alcohol use disorder. Each person received 12 psychotherapy sessions for 12 weeks and was randomly assigned to receive either two doses of psilocybin (48 patients) or an antihistamine placebo (45 patients). The team tracked the participants’ health outcomes and their daily drinking patterns for eight months. After the eight months, every participant was offered a third session where they would knowingly receive psilocybin.

Twice as many people in the psilocybin group stopped drinking altogether compared with those who were abstinent in the placebo group (48 percent vs. 24 percent). “My greatest expectations for this were to be able to manage my cravings, and this surpassed that,” said John Costas, one of the first participants enrolled in the clinical trial, in a press conference about the study. “[Psilocybin] eliminated all my cravings to the point where it cured my alcoholism, and I don’t categorize myself as an alcoholic anymore.”

Paul Mavis, another study participant who received the placebo but then psilocybin in the optional third session, said he feels comfortable again going out to dinner with friends who are drinking in front of him. “No one would have thought that I would not be drinking, including myself… I haven’t had a drink or a craving, it was as if I never drank in my life.”

[Related: What is a hangover? And can you cure it?]

“This is a very encouraging preliminary study of psilocybin-assisted therapy for alcohol use disorder,” says Keith Heinzerling, an addiction medicine specialist and director of treatment and research in psychedelics at Providence Saint John’s Health Center who was not affiliated with the study. Not only were there improvements in heavy drinking, but Heinzerling noted taking psilocybin did not cause any serious side effects. He pointed out, though, that the study had trouble hiding who had the hallucinogen and who did not; participants quickly realized which group they were in. “This is a challenge in all psychedelic clinical trials and may have biased the results in favor of psilocybin.”

The study has the potential to expand psilocybin use to co-morbidities often associated with alcohol dependence, Giordano says. But it would have been helpful to observe how psilocybin affected people by gender, ethnicity, and age, he adds.

Bogenschutz and his team are planning to expand their findings into a three-year trial with more than 200 participants at 15 sites. If all goes well, the trial may be one step closer toward FDA approval of psilocybin, which Bogenschutz says would be “a real breakthrough in the treatment of alcohol use disorder.”