What to consider when taking Pfizer’s COVID-19 pill Paxlovid

The drug can interact with many other medications but is still extremely effective in preventing severe COVID-19. 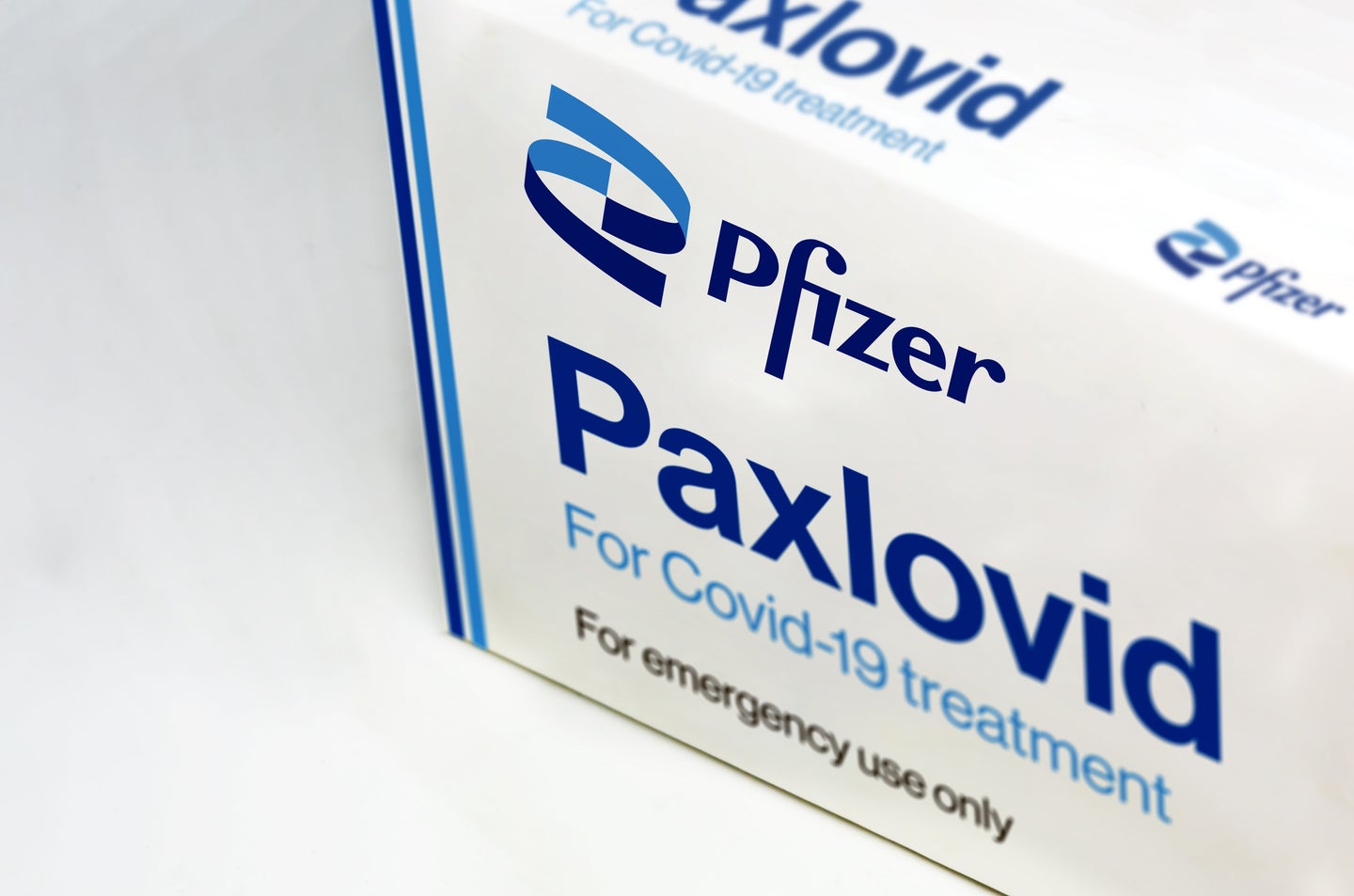 Paxlovid is one of the few antivirals available to treat COVID—but it comes with side effects that you should know about. Deposit Photos
SHARE

This winter, demand for COVID-19 treatments outstripped supply in many areas as the Omicron variant brought cases to record-high levels in the United States.

As this surge has ebbed, medications to combat COVID-19 have become more accessible. One particularly promising treatment is Pfizer’s Paxlovid, which has received emergency use authorization in COVID-19 patients aged 12 years and older who weigh at least 88 pounds and are especially vulnerable to developing severe COVID-19. In clinical trials, the antiviral pill was nearly 90 percent effective at protecting unvaccinated people at high risk of severe COVID-19 from hospitalization and death if given soon after symptoms started.

“The fact that we have a drug that does that is really remarkable,” says Scott Roberts, the associate medical director of infection prevention at the Yale School of Medicine. “We’ve seen supply go up and most patients who do qualify for this are able to receive it.”

Paxlovid has several advantages over other COVID-19 treatments, but has a key drawback: it interacts with a number of other medications, including some antidepressants, heart medicines, and hormonal birth control. However, these complications can often be avoided by adjusting the dosage of the other drugs, Roberts says.

The most common side effects of Paxlovid treatment tend to be mild and include diarrhea, muscle aches, high blood pressure, and an altered sense of taste, Roberts says. However, the medication isn’t recommended for people with severe liver or kidney disease.

Paxlovid also interacts with various other medicines. “The list is longer than most, and I think possibly most concerningly…it interacts with some medications that are really critical for many diseases,” Roberts says. “A lot of these patients who are high-risk for COVID…are on medications that do need to be evaluated before administering this.”

Some of these drugs include medicines for heart arrhythmias, immunosuppressants for organ transplant recipients, and blood thinners, he says.

“Both the drugs [in Paxlovid] affect enzymes in the liver that normally help clear other medications from a person’s body,” Abinash Virk, an infectious disease specialist at the Mayo Clinic, said in an email. “Levels of some [of] these other medications may be increased or decreased.”

The drugs, or compounds, that makeup Paxlovid are nirmatrelvir and ritonavir. During treatment, patients take nirmatrelvir and ritonavir tablets twice daily for five days. While monoclonal antibody treatments for COVID-19 target the ever-changing spike protein on the novel coronavirus’s surface, Paxlovid prevents the virus from making copies of itself. Nirmatrelvir blocks a kind of enzyme known as a protease that would normally snip strings of proteins the virus makes during replication into smaller, functional pieces. Ritonavir, which was originally developed as an HIV medication, prevents nirmatrelvir from being metabolized.

“That component can hang around the bloodstream longer and act on COVID longer at much higher concentrations and work to inhibit viral replication in a more efficacious way,” Roberts says.

But Roberts explains that the presence of ritonavir in particular, “causes many drug levels to fluctuate wildly.” Often, this means the concentrations of drugs such as blood thinners rise “quite substantially” because they can’t be broken down properly.

[Related: The FDA is inching closer to a long-term COVID booster plan]

Paxlovid can make some drugs less effective and sometimes cause serious or even life-threatening reactions. “Before a patient takes Paxlovid, the patient, the pharmacist and the prescriber should review all of the patient’s medications to identify and avoid clinically significant drug interactions,” Virk said.

Some medications, such as the statins used to treat high cholesterol, can be stopped for a few days while the patient is taking Paxlovid, Roberts says. In other cases, the dosage can be adjusted. Paxlovid may affect how some birth control pills work, so people taking them should consider using a backup form of contraception while undergoing treatment.

Unfortunately, some drugs cannot be safely discontinued while a person is on Paxlovid, including certain heart and anti-seizure medicines, Roberts says.

There’s also a concern that in people with undiagnosed or uncontrolled HIV, the exposure to ritonavir could teach the virus to become resistant to HIV drugs that work similarly. In theory, this could mean these drugs won’t work as well if the person needs them in the future to treat their HIV. However, Roberts says, the Infectious Diseases Society of America considers this very unlikely since Paxlovid treatment is so brief. Additionally, Paxlovid can be given along with antiretroviral therapy to COVID-19 patients who have HIV.

Pfizer told Popular Science in an email that it’s working to educate physicians, pharmacists, and other healthcare providers on how to manage potential drug interactions with Paxlovid. “We are also working with some of the largest telemedicine companies to ensure their [healthcare providers] are knowledgeable about PAXLOVID and ready to treat appropriate patients, and we are reaching out to pharmacy customers directly to help address questions,” the company said.

For those who cannot take Paxlovid, the antivirals remdesivir and Molnupiravir may be an option.

Roberts suspects that in time additional antiviral medications will become available that match Paxlovid’s advantages without interfering with so many other medications. Something similar happened with HIV treatments, Roberts notes, which initially contained ingredients that caused a lot of interactions with other drugs.

“They came out with a new class of medications that do not require those [ingredients], and that drug-drug interaction concern is significantly lowered,” he says.

Although Paxlovid does have limitations, Roberts emphasizes that “It’s a really game-changing drug.”

Antibody treatments, which have fewer known adverse drug interactions, worked against previous versions of the virus, but were rendered ineffective against Omicron because the variant’s spike protein has so many mutations. Paxlovid, on the other hand, has held up well against Omicron in laboratory tests. It also has the added benefit of being taken as a pill, while other treatments, such as remdesivir, must be taken intravenously, explains Roberts. Merck’s antiviral Molnupiravir is also given orally, although it only reduced hospitalizations and deaths by 30 percent in clinical trials.

[Related: COVID antiviral pills work against Omicron—when people can get them]

Preliminary data also indicate that Paxlovid protects non-high-risk patients—clinical trial participants who were treated with medicine were 70 percent less likely to be hospitalized than COVID-19 patients who were given a placebo.

“The next big frontier I think with Paxlovid is expanding its use to even low-risk people,” Roberts says. “As more data comes out and supply increases…anybody diagnosed with COVID might qualify for Paxlovid.”

Researchers are optimistic the drug will also be effective against future variants of SARS-CoV-2 as well as other coronaviruses, Roberts says.

Until then, he advises people to get tested as soon as possible if they develop COVID-19 symptoms, and inform their doctors if they test positive. Like Tamiflu, the earlier Paxlovid is given the better its chances of success.

“I would advise patients if they do have COVID the first and foremost treatment to look at would be Paxlovid,” he says. “That would be my first choice for anybody in the outpatient setting testing positive who qualifies.”