This Roundup ingredient is riddled with controversy—here’s why

While glyphosate has been linked to various health issues, it has yet to be fully removed from the market. 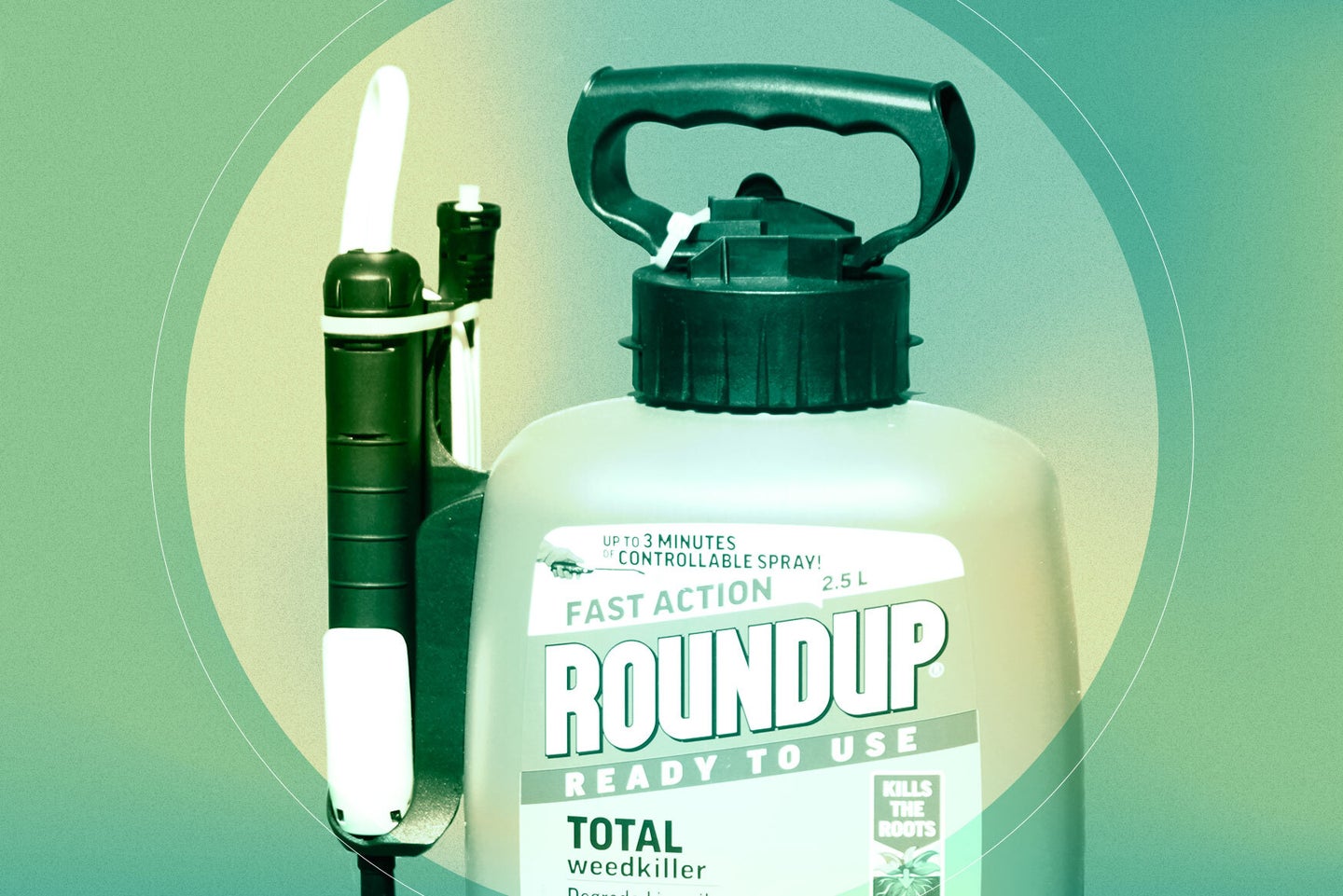 Glyphosate has been linked to cancer and miscarriages—why is it still on the market?. Deposit Photos
SHARE

This post has been updated to include additional context and background for several studies and sources cited. It originally published on January 13, 2022.

In July, chemical-manufacturing giant Bayer announced that home gardeners would no longer be able to buy products containing glyphosate, the active ingredient in the world’s most actively used weed-killer Roundup. It was the culmination of tens of thousands of lawsuits filed against Bayer and Roundup’s previous owner, Monsanto, for their alleged role in causing a form of cancer called non-Hodgkin’s lymphoma. So far, plaintiffs have been awarded hundreds of millions of dollars in settlements. In August, Bayer filed a petition to have the US Supreme Court review one of those cases.

The decision to remove glyphosate from the home-gardening market wasn’t an admission of culpability, and farmers will still use glyphosate-containing products. Bayer maintains that glyphosate is safe and doesn’t cause cancer. The most recent report from 2016 by the Environmental Protection Agency (EPA) supports Bayer’s view. The authors of the report concluded that glyphosate was an unlikely carcinogen and poses no known meaningful risks to human health.  These findings have been backed up by regulatory agencies across the globe, including the EU’s Assessment Group on Glyphosate (AGG), European Food Safety Authority (EFSA), European Chemicals Agency (ECHA), German BfR, Australian, Korean, Canadian, New Zealand,  Japanese regulatory authorities, and the Joint FAO/WHO Meeting on Pesticide Residues (JMPR). Still, authorities like WHO’s International Agency for Research on Cancer list glyphosate as a probable human carcinogen.

At the same time, scientists and economists raise doubts about the safety of Roundup and similar products—and the rigor of the research that’s gone into reports by Bayer and the EPA.

When Monsanto first marketed Roundup in 1974, the company sold it as a breakthrough tool for agriculture: an herbicide that was safe for the environment and for humans. Unlike the pesticide DDT, which was banned by the EPA in 1972, Monsanto asserted that glyphosate wouldn’t linger in the environment or in human bodies. Studies suggest that within soil, glyphosate’s half-life, or the amount of time it takes for half of a particular application to break down, is between seven and 60 days. It leaves behind a chemical byproduct, AMPA, but neither glyphosate nor AMPA tend to accumulate in human cells. Instead, they’re excreted in urine and feces.

[Related: Pesticides might be worse for bees than we thought.]

There’s also the mechanism by which glyphosate kills weeds: it inhibits the shikimate pathway, a system plant cells use to produce energy, by inhibiting an enzyme that helps them synthesize amino acids from carbohydrates. In essence, glyphosate starves plants. Human cells don’t have this same pathway to energy production. This detail sets glyphosate apart from other chemicals that cause genetic mutations and cancer, which tend to target pathways that also exist in human cells, says Jia Chen, a professor of environmental and public health at Icahn School of Medicine at Mount Sinai. “For that purpose, you would consider it quite harmless,” Chen says.

While human cells don’t use the shikimate pathway, bacteria do. It’s possible that glyphosate’s apparent risk to human health is due in part to the chemical’s effect on the good bacteria in our guts. This community of good bacteria don’t just help us digest our food; they’re also vital players in our immune system.

Studies on rats and bacteria cultured in labs suggest that glyphosate inhibits the composition of gut bacteria, possibly limiting their ability to modulate our immune systems. (However, we can’t know for sure based on these studies whether the same effects occur inside the human body.) Theoretically, glyphosate doesn’t have to stick around in our cells to have these effects; the chemical just needs to pass through. Imbalances in the microbiome create room for pathogenic bacteria, which could trigger inflammation. Researchers reason that both inflammation and immune-disruption are associated with increased cancer risk, according to a 2018 review published in the journal Carcinogenesis.

However, Bayer points out that when the European Food Safety Authority reviewed claims that glyphosate harms human gut microbiota, they found no evidence to support that assertion.

On top of that, research suggests that even at very low concentrations, glyphosate mimics human hormones, potentially triggering or speeding up the growth of tumors.

Nearly half a century after its introduction to agriculture the chemical is ubiquitous in the environment. “Glyphosate is, by far, the most heavily used and most profitable herbicide ever discovered,” says Charles Benbrook, an agricultural economist at the Heartland Health Research Alliance and a compensated expert witness in the ongoing Roundup litigation. As of 2014, 825,000 tons of the herbicide were used each year worldwide, according to an article published in the journal Environmental Health.

Scientists have found glyphosate everywhere from tree roots to honeybee hives. In a study of 94 pregnant women who weren’t directly exposed to herbicides at work, Chen and a team of international scientists found traces of glyphosate in the urine of 95 percent of participants. “You can even detect it in surface water and rain,” Chen says, “Glyphosate is basically everywhere.”

The trouble with studying Roundup

Scientists have linked glyphosate and glyphosate-containing products to a number of conditions, from miscarriages to cancer. But you can’t randomly expose people to a potential toxin and compare them to an unexposed group, the way you would conduct clinical trials for a drug—doing so would be unethical for the former and pretty much impossible for the latter, given this compound’s ubiquitousness—so examining the effects of glyphosate in humans remains a challenge, Chen says. Scientists tend to study the effects of the chemical on human cells or other animals in the lab, or to retrospectively ask people about their exposure to glyphosate to find potential health correlations. Still, exposing lab mice to toxins won’t give you a clear image of what happens to humans, and people may bump into multiple potentially toxic substances throughout their lives that could damage their health. In other words, neither method is perfect.

In 2016, the EPA concluded that glyphosate was “not likely to be carcinogenic to humans.”

[Related: Pesticides can hurt agricultural communities—so why do farmers fight back against bans?]

Scientists, regulators, and the popular press have all focused overwhelmingly on the link between glyphosate and cancer. “But from my point of view, I’m more interested in the non-cancerous outcomes. Because health is not just equal to cancer,” Chen says. This year, Chen’s pilot study on pregnant women, published in the journal Environmental Pollution, linked higher urinary concentrations of glyphosate to shorter pregnancies. All of the pregnant people in the study gave birth to full-term babies—in other words, gestation lasted 37 weeks or longer—but shorter pregnancies, especially those shorter than 37 weeks, are associated with complications in newborns, from breathing to gastrointestinal problems. The babies born to people who had more glyphosate in their urine also had greater distance between their anus and genitalia, which is associated with higher levels of male sex hormones. That finding suggested to Chen that glyphosate might interfere with the endocrine system—alarming, but not conclusive. Again, Bayer points out that no regulatory authority has ever found evidence that glyphosate acts as an endocrine disruptor.

Data on non-cancer outcomes isn’t the only information we lack, says Leland Glenna, a sociologist at Pennsylvania State University. Herbicide manufacturers aren’t required to share the inactive ingredients in their products, so scientists don’t really know what Roundup contains, aside from glyphosate. That makes it difficult to study.

The data isn’t just incomplete. Glenna, who researches the role of science and technology in agricultural policy-making, believes much of it is unreliable. Much of the epidemiological data we do have comes directly from scientists employed by the companies producing herbicides—a potential conflict of interests. In that EPA report on glyphosate, 39 percent of the studies reviewed were produced by industry-funded scientists, according to an analysis published in Environmental Sciences Europe.

“There’s a clear distinction between public science and private science,” Glenna says. That same analysis found that out of the 36 studies on pure glyphosate that were included in the EPA report, just two percent published by industry scientists found an association between glyphosate and cancer versus 67 percent of those published in peer-reviewed journals. But even that number may be unreliable.

During the 2018 court case Johnson v Monsanto, evidence presented included leaked internal emails in which Monsanto employees discussed ghostwriting studies to support the claim that glyphosate is safe for human health.  This included discrediting the International Agency for Research of Cancer’s report that “glyphosate was a probable human carcinogen,” according to a 2021 review co-authored by Glenna and published in the journal Research Policy.

Still, scientists don’t have conclusive evidence that Roundup causes health problems. According to Chen, science has a long way to go before reaching any conclusion on the effects or Roundup—or lack thereof. She and other scientists are calling for more independent research, the release of information on inactive ingredients in these products, and a greater focus on complete herbicide formulations rather than just glyphosate.

For now, Heartland Health Research Alliance’s Benbrook doesn’t advise consumers to renounce Roundup entirely. Instead, he says to take proper precautions: wear protective clothing when using the herbicide, take a shower immediately after any potential exposure, and avoid the product if you’re immunocompromised in any way.

“There is some alarming evidence there, but nothing is concrete,” Chen says. “That’s why we need more research.”