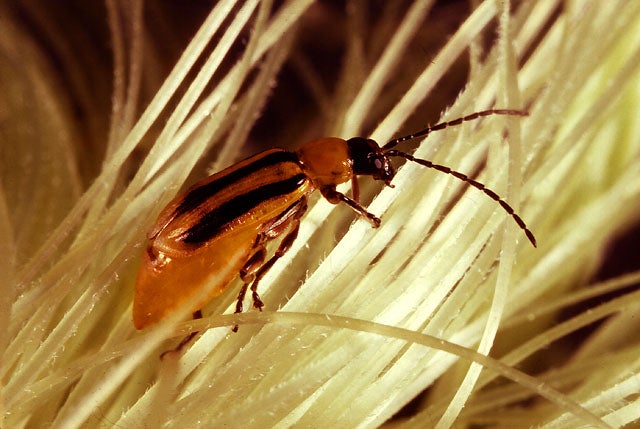 When farmers want to kill crop pests or weeds now, they often spray their fields with something that can be deadly to a host of animals or plants. But what if they could target individual species, such as corn rootworm? New research, harnessing a Nobel-Prize winning discovery to silence genes, hopes to create such products.

“If you use a neuro-poison, it kills everything,” Subba Reddy Palli, an entomologist at the University of Kentucky who is researching the technology, which is called RNA interference, told the New York Times. “But this one is very target-specific.”

The technique, called RNA interference or RNAi, works by creating snippets of RNA that correspond to genes in the target species, say corn rootworm. When these chunks of genetic material enter the rootworm, perhaps after being sprayed onto the crop, the animal reacts to this RNA snippet as it would an invading virus. This prompts a response that attacks and silences the corresponding gene in the host’s own DNA. If this gene is necessary for the organism’s survival, the theory goes, it dies. The idea behind RNAi was awarded the 2006 Nobel Prize in physiology/medicine, but applying it to fight pests is a recent development.

The EPA met on Tuesday (Jan. 28) to discuss safety issues regarding the technique, and will report on the proceedings within 90 days.

Monsanto is developing several products along these lines, as the Times notes:

Monsanto has applied for regulatory approval of corn that is genetically engineered to use RNAi, as the approach is called for short, to kill the western corn rootworm, one of the costliest of agricultural pests. In another project it is trying to develop a spray that would restore the ability of its Roundup herbicide to kill weeds that have grown impervious to it.

But not everybody is on board:

“To attempt to use this technology at this current stage of understanding would be more naïve than our use of DDT in the 1950s,” the National Honey Bee Advisory Board said in comments submitted to the E.P.A. before the meeting, at the agency’s conference center in Arlington, Va.

There are concerns that RNAi could kill “good” species closely related to the target pest, have health effects on humans, or other unknown consquences.