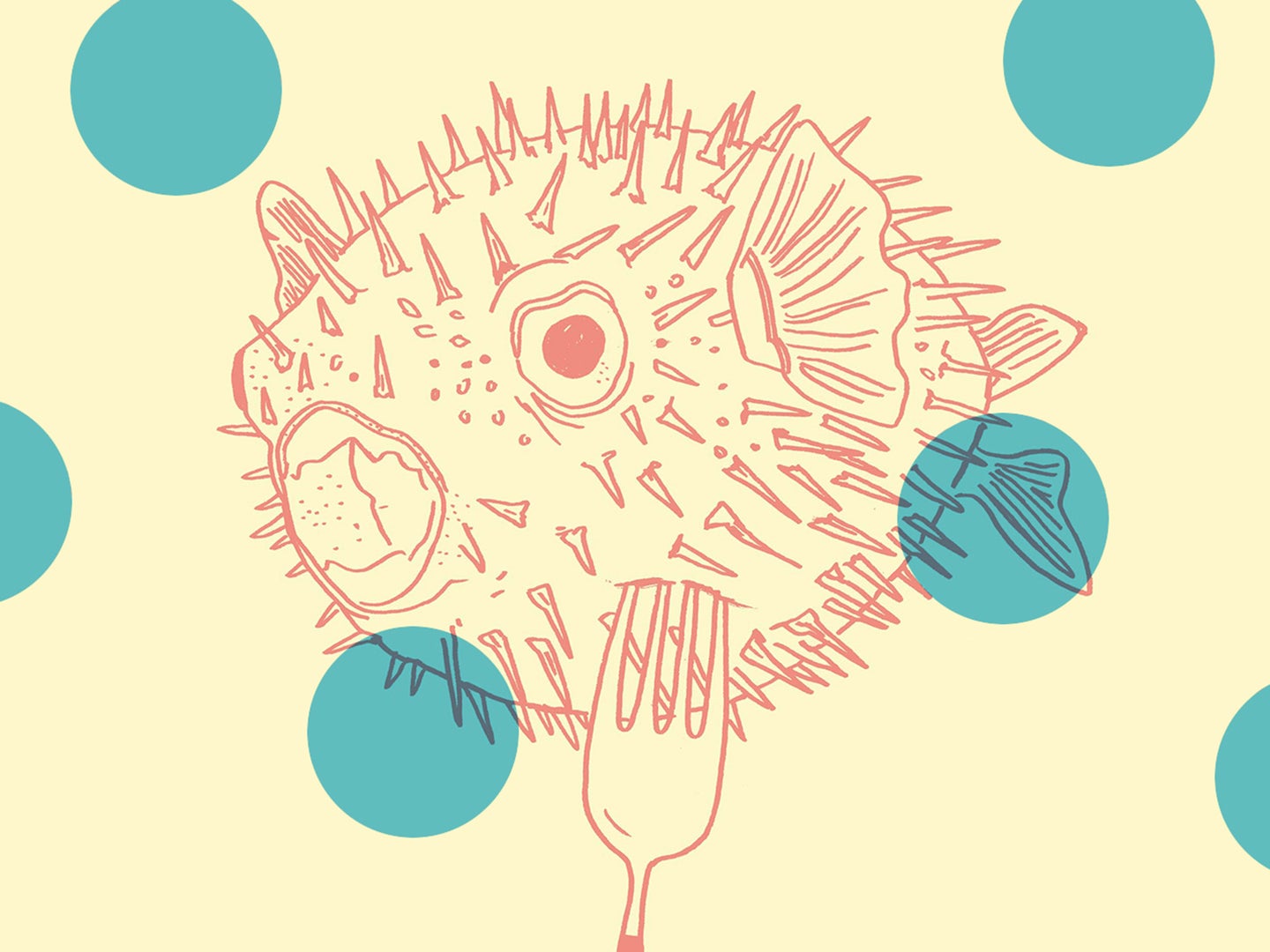 Deadly and delicious: These 6 foods can actually kill you

From pufferfish to maggot cheese to potatoes, these appealing foodstuffs are fatally dangerous.

GENERALLY SPEAKING, humans will try to eat anything at least once. Some anthropologists theorize that prehistoric people sussed out what was edible by trial and error, but we haven’t stopped pushing our palates in new, sometimes dangerous directions. The risk of illness and even death is often baked into our favorite flavors and fares. Here are some beloved bites that can kill—if things go awry.

A dash of danger is part of the appeal of this lean and mild whitefish, which is served as slivers of sashimi in select Japanese restaurants. Tetrodotoxin, a paralysis-inducing chemical that disrupts the connections between neurons and muscle cells, collects in the liver and sex organs of this family of pufferfish. Japan’s health ministry requires fugu chefs to be certified in properly cleaning and removing the potentially deadly body parts. Yet some diners insist that a hint of risk gives the dish its allure. A possibly apocryphal tradition holds that culinary masters know just how much toxin should linger on the meat to provide a pleasing tongue tingle.

Franks have long been a leading cause of choking in young US children due to the all-American food’s shape, size, and texture. Health experts advise parents against cutting dime-size medallions for tykes to chew on; instead, the sausages should be sliced into thin strips, then chopped into smaller pieces. But that’s not the only way a wiener can get you: The American Institute for Cancer Research and the World Health Organization suggest limiting consumption of all processed meats, because emerging evidence links them to an increased chance of colorectal cancer. Hot dogs may also be associated with higher risks of cardiovascular disease, according to a 2021 study in the American Journal of Clinical Nutrition.

Wild almonds are slightly different from the domesticated seeds found in grocery stores. These bitter varieties produce amygdalin, a compound that our bodies convert to cyanide. The sweet almonds we usually eat have a genetic mutation that means they produce less of this respiratory toxin than the fatal doses found in the wild. Some foodies claim that a sprinkle of the bitter varieties is the key to deepening the taste of nutty confections. Heating or boiling them beforehand is the best way to dissipate the poison.

This humble root vegetable’s sprouts, leaves, stems, and flowers contain a harmful compound called solanine. Even the flesh of the spud can have high quantities of the noxious stuff—at least once you see it go green. Potatoes, like almost all plants in the nightshade family, produce solanine to ward off insects. As they make the chemical, they amp up their chlorophyll too, creating an unappetizing shade of chartreuse. But don’t fear the oft-maligned green chip: Eating the occasional off-color potato is probably fine, though it may have a slightly acrid taste. Just don’t make a habit of chowing down on taters past their prime: an excess of solanine can cause vomiting, paralysis, and even death.

A frequently cited proverb states that “all mushrooms are edible, but some only once.” Even safe fungi can be tricky, with many poisonous look-alikes that can lead amateur foragers astray. Amanita phalloides, for example, can resemble a benign white mushroom like the paddy straw to the untrained eye. But this unassuming species is called the death cap for good reason. It contains lethal amatoxin, which holds up even after thorough boiling. And don’t trust your nose or tongue to sound the alarm in time to save you: Writer Cat Adams reports in Slate that “many people who are poisoned claim the mushroom was the most delicious they’ve ever eaten.”

Casu marzu is a Sardinian sheep’s milk cheese with an added kick: living larvae of the Piophila casei fly. As maggots eat their way through the fermented dairy, their digestion transforms it, making it softer and creamier. Many diners praise its intense and unique flavor, which is said to be tangy, nutty, and a bit bitter. It also holds the Guinness World Record for the “most dangerous cheese” because the live grubs can contaminate the product with unsavory bacteria—and, if swallowed whole, can potentially nibble on the diner’s intestinal tissue. Unsurprisingly, this product is globally banned from sale, but adventurous eaters in the know continue to indulge.