The tanning bed in your gym is worrying dermatologists

How healthy is that ‘healthy glow’? 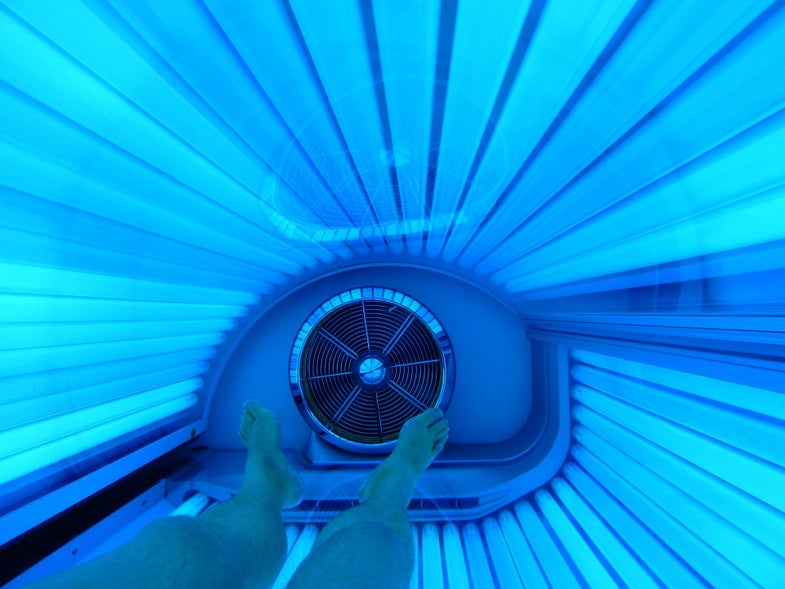 GTL, or–for those who don’t watch Jersey Shore, “gym, tan, laundry,”–may be the credo of Mike “The Situation” Sorrentino and his friends on the Shore, but the pairing of gym and tan stretches far beyond Jersey. Gyms across the country include tanning beds among their offerings. A new paper from University of Connecticut researchers is the first to look specifically at gym users who tan, finding that they’re part of a high-risk population of tanners. Its lead author questions why gyms–ostensibly places to get healthy–would offer their patrons an opportunity to get a tan.

Tanning beds are known carcinogens, but some of the nation’s biggest gym chains, including Planet Fitness and Anytime Fitness, offer tanning beds and booths in many of their locations. In fact, the gym “seems to be a very popular place for tanning beds,” says Sherry Pagoto, the study’s first author.

While a visit to the gym followed by a relaxing tanning session might sound to some like just two facets of self-care, Sorrentino and his fellow GT aficionados are placing themselves at higher risk of skin cancer every time they get into a tanning bed or booth. What’s more, a 2013 study of people who are physically active during their non-work hours found that they are at a heightened risk of melanoma. Melanoma is the deadliest kind of skin cancer, and like other skin cancers is caused by exposure to cell-harming UV rays, which people can be exposed to either outside, or in tanning facilities.

Pagoto, who studies tanning practices in a variety of situations, sought to figure out what kind of tanners were using gym tanning beds. To conduct the study, her team surveyed 636 people from across the country who had used a tanning bed at least once before. They found that 24 percent of those people–around 150 tanners–had used a tanning bed or booth at the gym before. And those gym-going tanners stood out: “they tan more and they’re actually more likely to be tanning dependent,” Pagoto says.

This concerns her, especially given the finding that people who exercise often are at greater risk for melanoma. Although it’s not known what proportion of those exercisers who get skin cancer are using tanning beds, given the wide distribution of the beds in gyms, Pagoto says it’s safe to assume the number is significant. Her team’s research is ongoing and they may look at this question in the future, she says. Given the public health implications of their work, Pagoto and other tanning researchers are most interested in understanding the motivations and behaviors associated with this practice.

Over the past decade, national and international government concern about indoor tanning has led to increased regulation both federally and in states across the country–regulation that’s focused on tanning salons. But gyms may not receive the same level of scrutiny as tanning salons, says Pagoto, and in some cases they aren’t covered by the same laws. Notably, they’re not subject to the “tanning tax” that was included in the American Care Act. That means they’re flying under the regulatory radar, says Robert Dellavalle. The University of Colorado dermatology professor was not involved in the current study, although he has worked with Pagoto on other projects.

“We know that tanning is a risk,” says Jerod Stapleton, a Rutgers behavioral prevention scientist. Stapleton is the one who came up with the assessment that researchers use to measure tanning addiction or dependency. It’s what Pagoto and her colleagues used to evaluate gym tanners. He says that it makes some sense that people tan at the gym: “There’s this message that tanning is part of this spa-like behavior and self-care.”

Having tanning at the gym, along with amenities like massage chairs–all of which are offered to Planet Fitness Black Card members, for instance–underlines that message, he says. But “you wouldn’t see someone saying, ‘I smoke half a pack of cigarettes a day as part of my self care regimen.”

Planet Fitness and Anytime Fitness, two of the country’s largest gym chains, were named in the new paper. While Anytime Fitness did not respond to a request to comment before press time, Planet Fitness representatives sent an email statement: “While our business model does not place an emphasis on indoor tanning, the majority of Planet Fitness locations offer indoor tanning services.” All clubs have to adhere to local and state regulation, the statement goes on to say.

Dellavalle and Pagoto worked together on an initiative to get tanning beds off college campuses, and he suggests a similar approach to the one that they took there may be the way to combat gym tanning: point out that the tanning beds may be a liability issue, with users who go on to get skin cancer being able to sue the gym. Unless something changes, though, gyms across the country are free to continue having tanning beds.

But if you love the look of a fresh tan, don’t despair that you’ll be pasty forever–Dellavalle suggests spray tanning in preference to indoor or outdoor tanning. And you can always rely on some of Sorrentino’s other advice by doing your laundry. As he says, “if the outfit is not looking good, then the whole package is off.”