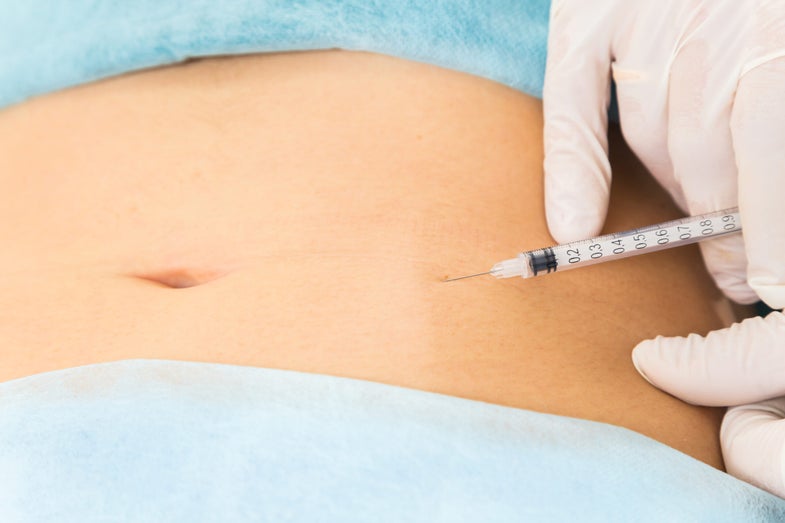 Humans will try just about anything in pursuit of “true” beauty. Chin jobs, eyelash transplants, artificial dimples, even “Pokertox” (Botox injections tailored to enhance one’s poker face. Seriously, it’s a thing). What about injecting carbon dioxide into your skin?

In a recent study, a group of plastic surgeons set out to see if carboxytherapy—a cosmetic treatment popular outside the U.S. for treating stretch marks, cellulite, and scars—actually works. Their conclusion? Well, sort of.

“We were pleasantly surprised it does seem to do something,” says Murad Alam, study author and vice chair of dermatology at Northwestern University Feinberg School of Medicine. “But we didn’t see the really large changes that some other investigators are reporting. We didn’t see persistence.”

Many U.S.-based clinics that offer carboxytherapy quote some version of “studies show” that the treatment works, but until last week, no randomized, clinical trials had ever actually been done in the U.S. Testing carboxytherapy as a less invasive way to reduce belly fat, Alam’s team injected a liter of carbon dioxide into one side of participants’ abdomens. They saw a noticeable difference through an ultrasound after five weekly treatments. But six months later, they could no longer see a difference.

“Obviously for fat reduction we want it to last, we don’t want it to be something short-term only seen right after the treatments,” he says.

Carboxytherapy is yet to be scientifically verified, but some clinicians swear by it. So how do you know if CO2 is right for you?

It sounds kind of futuristic, but carboxytherapy is by no means new. The treatment was first discovered in 1932 in Royat, France, a small town famous for its ancient thermal springs. Soaking in carbon-rich pools seemed to help heal wounds and improve circulatory diseases like Raynaud’s syndrome. By the ‘50s, French doctors began using carbon dioxide injections to treat cellulite.

Lisa Zdinak, chief surgeon and founder of Precision Aesthetics in New York City, was one of the first doctors to bring carboxytherapy to the U.S. after she saw how popular it was in Brazil (“Carboxy clinics there are akin to Starbucks here,” she jokes). Her clinic uses it to treat under-eye circles, make skin tighter, and her most popular request: stretch marks.

“There’s always a line at the gas-pump,” she says. “We treat at least three to four patients per day on a steady basis. Carboxytherapy is safer than any treatment being performed nowadays.”

Carboxytherapy being used to treat dark circles around the eyes.

Zdinak has been using carboxytherapy for more than 12 years, and says she’s yet to see an adverse effect. Even Alam, who injected a whole liter of gas into patients’ bellies, says minus some discomfort, the procedure seems safe.

And it holds a lot of appeal for both doctors and patients. It’s non-toxic, less invasive compared to something like liposuction, and is relatively inexpensive (well, depending on your definition of inexpensive), usually ranging from $75 to $150 per treatment. Carbon dioxide is already safely used in procedures like laparoscopic surgery—a minimally invasive surgery performed with the help of a tiny camera—to keep the abdomen inflated.

But carboxytherapy isn’t a short-term commitment. Zdinak recommends 6 to 12 treatments, followed by touch-ups every 6 months. Sachin Shridharani, a New York-based plastic surgeon and member of the American Society for Aesthetic Plastic Surgery, says “it’s a lot of treatment for mild improvement.”

“We’re getting temporary improvement at best in these patients. We also don’t know the long-term effects of putting that much carbon dioxide constantly in your skin,” says Shridharani. “It has potential, but it’s not something I’d sign my patients up for.”

What does the evidence say?

A big issue with carboxytherapy is how it’s advertised. Many websites tout it as FDA-approved, but it’s not. Others point to scads of scientific evidence supposedly validating the treatment, but if you read the fine print, most studies are inconclusive.

Experiments like Alam’s show carboxytherapy does damage fat cells, but he has no idea how. Zdinak says it’s obvious: when carbon dioxide is injected into the skin, the shear force of the gas destroys the fat cells. The body is “tricked” into thinking it’s injured, which prompts new collagen (a protein found in skin) to form, resulting in healthy, younger looking skin.

Alam isn’t so sure.

“Everyone has a theory. I would say the answer is, it’s poorly understood how this works,” he says. “If someone came into my clinic right now and said, ‘What’s the most effective means of non-invasive fat reduction?’ I would not say carboxytherapy.”