...and will shower your phone with deals, offers, and ads 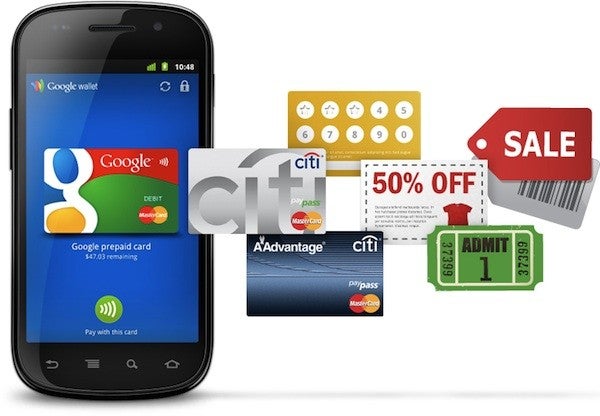 Google just announced the NFC-based mobile payment scheme we all knew was coming: Google Wallet. Leveraging the wireless NFC chip in (some, with more to come) smartphones, Google Wallet allows you to tap your phone on a point-of-sale system to pay with your credit card account, as well as a host of coupons and loyalty cards and other retail-friendly stuff Google showed off today.

Starting with the basics, we’d recommend anyone confused about NFC (and it can be confusing!) to check out our primer on the tech, which covers just about everything you’d want to know about the future of wallets (including the fact that we won’t even be using wallets–we’ll just be reaching into our robo-pockets for our superphones). All caught up? Good! So what’s Google Wallet anyway?

Google Wallet is a combination of a few different mobile payment features. It’s an Android app, both because Google is behind both Wallet and Android and because an Android phone (the Samsung Nexus S) happens to be the only NFC-wielding smartphone in the country. Google expects NFC to be in around 50% of all smartphones by 2014–a conservative guess, but the tech will need time to mature, so it seems pretty likely. Google’s open to moving Wallet to other platforms like iOS, BlackBerry, and Windows Phone, but phones need an NFC chip to be compatible with Google Wallet. Theoretically, that could be done with a simple sticker.

The first and most obvious feature is mobile payments–you can tap your Wallet-enabled phone on a point-of-sale system (the thing on which you swipe your embarrassingly 20th-century plastic credit cards right now) to pay. Easy! But NFC is a two-way protocol, which means you can (and will) receive stuff from retailers and Google as well. Google is encouraging the use of loyalty cards (you know, the “buy 20, get one free” things that are undoubtedly cluttering your wallet right now) and coupons or deals. This feeds into Google’s second new app, Google Offers. 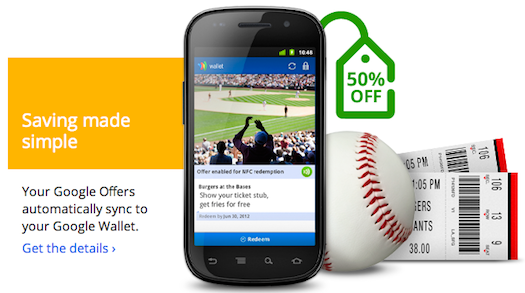 Buy something from a store, and that store will be able to send you a coupon, right to your Google Offers app. Plus, Google’s doing a little Groupon-type deal that’ll send new offers to you every day. You won’t have to keep track of these deals, though–Google Offers is designed to play nicely with Wallet, so that single tap at Subway will enable your $1-off coupon, pay for your sandwich, and make a digital stamp on your loyalty card so you can keep working your way towards that free meatball sub. That’s what’s available now, but it’s just the start, and depends on how far the retailers want to go with the system. Theoretically, as in an example Google showed, you could make up a shopping list on your phone, and when you walk into a grocery store, be informed immediately of what’s on sale, snag the coupons automatically, and be offered a loyalty card if you’re a regular shopper. Then, you’ll have the receipt saved, so if you get home and find that your milk has expired, you can take it back without having to worry about holding onto paper receipts. No more receipts! Ever!

Interestingly, even though the NFC chip itself doesn’t require power, the Google Wallet app does, so if your phone battery is dead, you won’t be able to use it. Once NFC spreads to essential items like transit passes and driver’s licenses, they may have to rethink that–smartphone battery life is not outstanding, and it would be pretty awful to be stranded with a dead phone that can’t check Twitter or buy a smoothie from Jamba Juice.

Google has already lined up a few partners, including Sprint (which just released the Nexus S 4G), retailers like Subway, Macy’s, and Walgreens (and several more), and money-types Citibank and MasterCard. MasterCard is the real trump card here–they’ve already got a pretty extensive NFC system in place, called PayPass, that currently allows you to wave your card or keychain dongle instead of swiping it (a feature of dubious use, to be sure). But that means that field-testing of Google Wallet starts right now (in New York and San Francisco, at least), with 100,000 merchants nationwide fully set up to handle your phone-tapping.

Of course, not everyone has MasterCard, which is the only official credit card partner of Google Wallet at the moment. So Google’s providing a pre-paid sort of account to every Google Wallet user, which works sort of like a debit card, allowing users to fill up their card with money from any bank account or non-MasterCard credit card.

Security-wise, we’re happy to see Google is acting very proactive. The fears about someone swiping your credit card information wirelessly while your phone is in your pocket seem to be mostly unfounded. To make any purchase, you’ll have to enter a PIN number. Even better, when you’re not actively using the Google Wallet app, the physical NFC chip is shut down, with no communication to the outside world. If you lose your phone, there’s a remote wipe in place that allows you to banish all traces of your financial information from your phone. 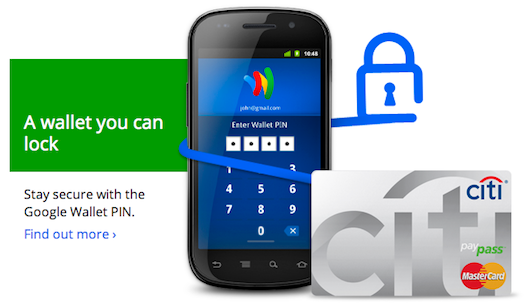 It’s pretty obvious why retailers are excited about Google Wallet–they get an entirely new way to draw in customers, whether it’s beaming them ads as they walk by their stores or putting up NFC-enabled ads that Wallet users can tap for offers. But for customers, it has the potential to be pretty intrusive, and even unsettling, from a privacy perspective. Google knows this, and have a few safeguards in place–geotargeting is opt-in, meaning retailers will not know your location unless you want them to, and they’re emphasizing that they’d rather have offers delivered when users are looking for them than simply spam-blasting every NFC user in sight with ads for $0.50 off nail clippers at Walgreens.

Google keeps touting openness, transparency, and control, all important when people’s money is in the mix. Hopefully Google can make Wallet useful for consumers as well as retailers, without being too annoying for consumers. The field testing is starting now, and Google says the full rollout will come “soon” after, probably sometime this summer.