Apple boasts that the “Retina Display” on its new iPhone 4 packs in more pixels per inch than the human... 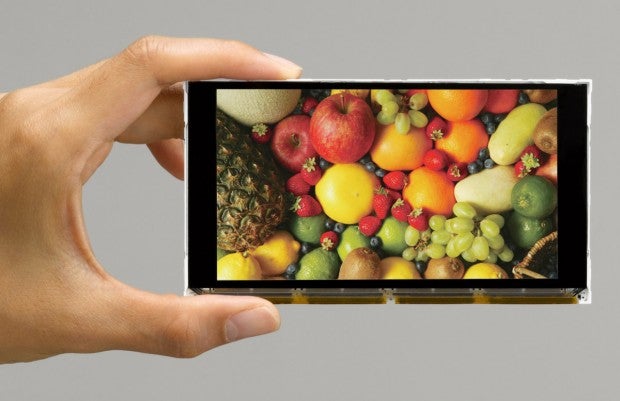 Apple boasts that the “Retina Display” on its new iPhone 4 packs in more pixels per inch than the human eye can identify, at 326 ppi. This new screen, from Casio and Toppan Printing, crushes it with a whopping 458 ppi. The real loser here: our suddenly inadequate-seeming eyes.

Of course, Apple’s claim is sort of dubious: maximum perceived pixels per inch isn’t a constant number. The closer you are to a screen, the more pixels per square inch you can see. But clever marketing terms aside, this new screen (a collaboration between Casio and Toppan Printing) is a pretty amazing achievement. At only 4.8 inches, this little screen is the smallest ever to achieve a full HD resolution of 1920 x 1080. Apple’s retina display, which along with Samsung’s Super AMOLED screens found on the Galaxy S smartphones is just about the best small scale screen around, clocks in at 960 x 640. (Those would be normal-sized pixels, not nano-pixels.)

The new display is a type I’ve never heard of, termed the Hyper Amorphous Silicon TFT, or HAST. It supposedly offers a 160-degree viewing angle, 16 million colors, and is up to 30% brighter than competing TFT displays. We haven’t seen one in person, but the promise of that much pixel density is really enticing–this looks like one very sharp little screen.

There’s no word on when (if ever) the screen would show up in any kind of gadget we could buy. The size, 4.8 inches, is sort of an awkward in-between size, too big for a smartphone but much too small for a tablet, and we don’t know anything about its size or power consumption. But that won’t stop us from pining for a full 1080p screen in our pockets in the near future.