This might be the cheapest internet-streaming TV device we've ever seen! 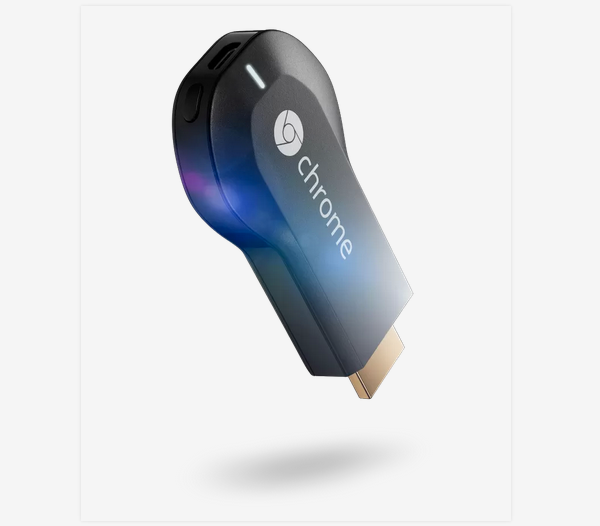 Today in San Francisco, Google announced a few intriguing new products–two hardware, one software. One is an updated version of our favorite Android tablet, one is the newest version of Android, and one is something that’s not quite like anything else. Let’s get into it!

By far the most interesting thing announced at today’s event was the Chromecast, a very small stick that reminds us a little bit of the Roku Streaming Stick. It’s a two-inch-long dongle that looks more like a USB flash drive than anything else, but in fact it plugs into the HDMI port on your TV. It’s not really like a Roku or an Apple TV, though; there’s not actually an interface, and there’s no remote.

Instead, you find the content on your phone or tablet and beam it to the Chromecast, just like beaming something from a phone to an Apple TV via AirPlay. In the Youtube, Netflix, music, or video app on your phone, there’ll be a little icon on the “now playing” screen. Tap it and a list of places to send the song or video will pop up; hit “living room” (or whatever you’ve named your Chromecast) and bam, it’ll start playing on your TV.

Currently, the Chromecast only supports Netflix and Youtube on iOS, and adds in the native music and video player if you’re using an Android phone or tablet. Google says they’ll try to add more (perhaps Hulu Plus, Amazon, Crackle, or HBO Go?) but given Google’s history with video streamers, who knows. One odd thing: it’s not powered by the HDMI port, like the Roku Streaming Stick (which requires a fancy, semi-rare sort of HDMI port, but still). That means it has to get power from somewhere, and that somewhere looks to be USB. If your TV has a USB port on it, cool, plug ‘er right into that as well. If not, well, you’ll have to run a cord down to your trusty power strip, which is a bummer.

The key thing about the Chromecast? It only costs $35. Yow! And then there’s this: “Once your Chromecast ships, you will recieve an email with a promotional code for 3 months of Netflix. Offer valid for previous, new and existing Netflix members, one per Netflix account.” That means if you’re currently paying the $8 minimum for streaming Netflix, or if you decide to sign up, you can subtract $24 from that price, bringing the cost down to about the price of a decent sandwich and a bag of chips. You can buy it here.

The Nexus 7 is our favorite Android tablet, and Google just announced a new version that looks like it’ll build on everything we liked about it before. The new one has the same sized screen, but trims down the bezel and the body so it’s smaller and lighter than before. The screen, by the way, is a huge upgrade, with a 1920×1200 resolution and a 323 pixels-per-inch density. That’s super high; Apple would call it a “Retina” screen, but we’ll just call it super crisp and clear.

It’s also got a faster processor than before (a quad-core Snapdragon, if that’s the kind of thing that interests you), double the memory (up to 2GB of RAM), dual stereo speakers, both a front and rear camera (the previous version only had a front-facing camera, which we kind of liked), and an array of new sensors and options (Bluetooth 4.0, near-field communication, wireless charging). The battery life has been extended by an hour or so; Google says you’ll get 9 hours of “HD” video watching out of it.

The new Nexus 7 will be available in three models: a 16GB and 32GB model with only Wi-Fi, for $229 and $269, respectively, and a 32GB model with 4G LTE for $349. The LTE model works with any of America’s LTE networks (that’d be Verizon, AT&T, or T-Mobile), and all the models are significantly cheaper than the equivalent iPad Mini model–with much more powerful specs, to boot.

Read more about the Nexus 7 here.