Fast Blood Test For Radiation Exposure Could Save Lives 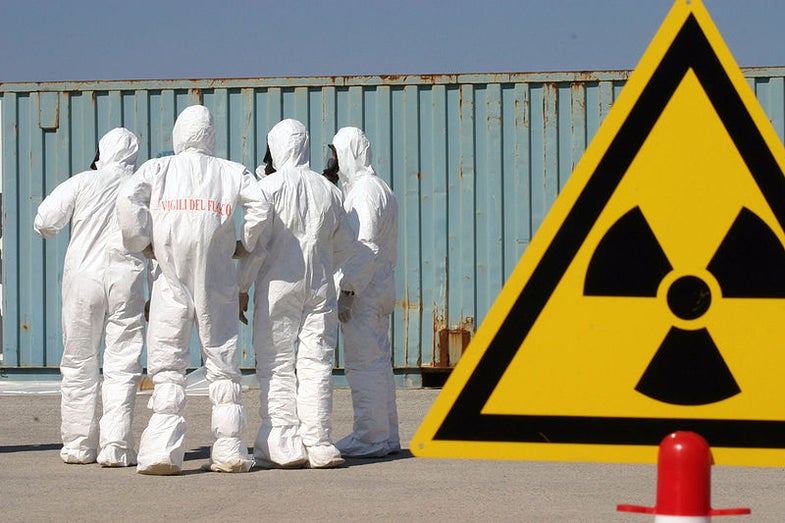 This photo was taken at a U.S. Navy exercise in Italy. Wikimedia Commons
SHARE

In the aftermath of a nuclear event like the Fukushima disaster, medical professionals have to quickly determine which victims they should treat for radiation poisoning, and which are beyond help. Right now, the only way doctors can figure it out is to estimate how much medication to give a patient based on her estimated distance from the center of the radiation leak, or to look at how many white blood cells had died in a patient’s blood sample. But at the moment it’s nearly impossible to be more exact within the 24 hours after the initial exposure, according to Popular Mechanics. Now, a team of researchers has found a tiny genetic indicator that reflects how much radiation the patient has been exposed to and the amount of damage it has done in the body.

The hematopoietic system–blood and the organs that produce it–are a great place to look for the first signs of radiation damage because it’s the most vulnerable. In the study, published yesterday in Science Translational Medicine, researchers exposed mice to low, medium, and lethal amounts of radiation. When they checked the rodents’ blood, they found that genes floating in the blood, called microRNA, were excellent indicators for the level of radiation to which the mice had been exposed. For one kind of microRNA–there are more than 60 that have been used as biomarkers for various diseases–the code is almost identical in everyone, but radiation scrambles the code. Higher levels of radiation lead to more mutations.

When researchers tried the same thing on “humanized” mice that had received transplants of human blood stem cells, they found that the microRNA changed the same way when exposed to radiation.

Armed with knowledge of such a clear indicator of radiation damage, the researchers hope to create a test that could detect microRNA signatures, though the researchers admit that it won’t be easy to work around the ethical issues of exposing humans to radiation. It’s not clear how long this type of test would take, but it would likely be faster than the current methods of determining radiation damage, and could be used in the first few hours after a nuclear event.