Could Drugs Heal A Broken Heart?

Exploring the age of anti-love biotechnology 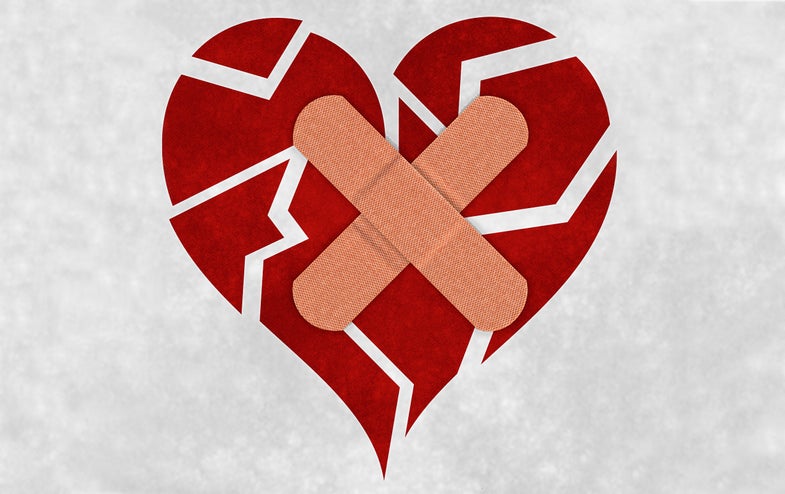 Love and heartache have always been inexorably tied. Recall the paranoid, lust-dizzy characters in A Midsummer Night’s Dream or the tortured, memory-deprived lovers in Eternal Sunshine of the Spotless Mind. Wouldn’t it be nice if a pill could take away the pain of a breakup? Researchers are looking into it.

As unromantic as it sounds, love is essentially a biochemical cocktail, and a poorly understood one at that. Scientists do know that oxytocin—often called the love hormone—plays a powerful role in bonding. In one experiment, Adam Guastella, a clinical psychologist at the University of Sydney in Australia, administered oxytocin to quarreling lovers during couples’ therapy. “It does seem to help people reduce their hostility and increase their willingness to take another’s perspective,” he says. Inhibiting the hormone could have the opposite effect: When Emory University researchers injected drugs into the brains of prairie voles to block oxytocin receptors, the voles lost interest in their long-term mating partners. With the manipulation of oxytocin, a love “off button” seems possible.

As unromantic as it sounds, love is essentially a biochemical cocktail, and a poorly understood one at that.

This is unsettling to researchers such as Brian Earp, an Oxford University neuroethicist who published a paper last year on anti-love biotechnology. “Since these kinds of interventions are very likely to be developed,” he says, “we need to start an ethical discussion now.” Earp argues that any such drugs should be voluntary, concomitant with therapy, and monitored for misuse. After all, he says, “There’s a long history of attempting to harness biomedicine to diminish same-sex sexuality.” But Neil McArthur, a philosophy professor at the University of Manitoba in Winnipeg, Canada, points out situations in which drugs might make sense: cases of pedophilia or abuse, for example, in which people are “behaving in a way that’s potentially destructive.”

The biggest obstacle may be a moral aversion to tinkering with a quintessential human experience. “Love is in some ways revered like religion,” says Vineeth John, a psychiatrist at the University of Texas Health Science Center. “For many people, it’s the primary reason for survival.” Until targeted therapy is practicable, anti-love drugs would not only dampen affection but also snuff out feelings for friends and family. To fully relieve heartache, then, scientists may first have to discern how to relieve us of our capacity to love. And no one’s interested in pursuing that.