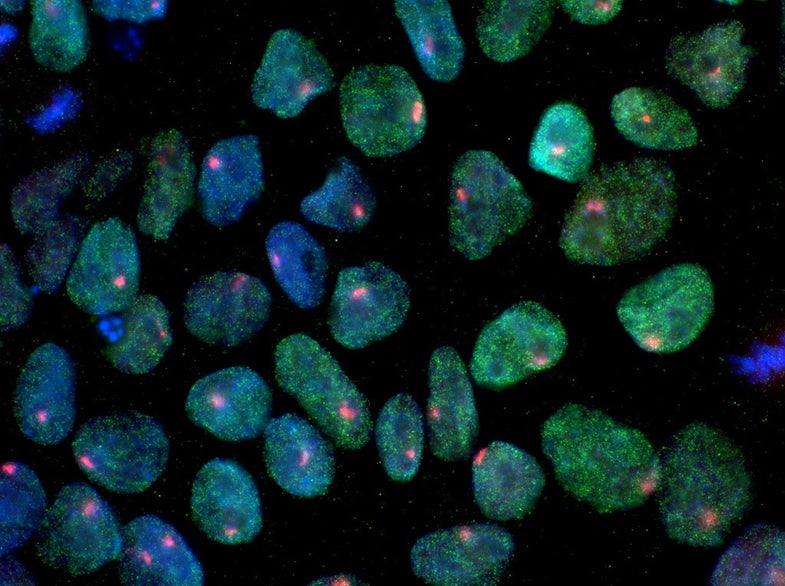 These cells were made from a woman's skin. Kathrin Plath lab, University of California, Los Angeles, via CIRM
SHARE

Hold your horses. There’s a new kind of pluripotent cell in town.

Pluripotent cells are exciting because they’re able to turn into almost any kind of cell in the body. That means they’re promising for treating injured organs and for other regenerative medicine. Stem cells—you’ve heard of those—are pluripotent. These new guys aren’t quite as powerful as stem cells and may never appear in treatments. But they reveal how much more there is to learn about stem cells and how to make them useful in medicine.

For nearly a decade now, scientists have been able to transform regular cells, often taken from a skin biopsy, into induced pluripotent stem cells in lab. Induced pluripotent stem cells are the embryo-like stem cells that doctors just began testing this year as a therapy for age-related macular degeneration, a progressive disease that leads to blindness. In a new study, an international team of biologists used similar, but not exactly the same, methods to create the new kind of pluripotent cell. Team members named the new guys F-class cells because they look fuzzy when they’re growing together.

The F-class cells can’t make weird chimeric mice, the way induced pluripotent stem cells do. Nevertheless, they’re able to turn into different tissue types. This is a state of pluripotency that scientists have never seen before.

Even though they’re starting to test induced pluripotent stem cells for therapies, scientists still have a lot of questions about what happens when they make those cells. Think of it like knowing how to bake cookies, without knowing exactly why the recipe works. The F-class pluripotent cells represent another step in learning more about man-made stem cells.