After the NYC marathon, where does all the poop go?

The tons of excrement, urine and that mysterious blue liquid have to go somewhere. 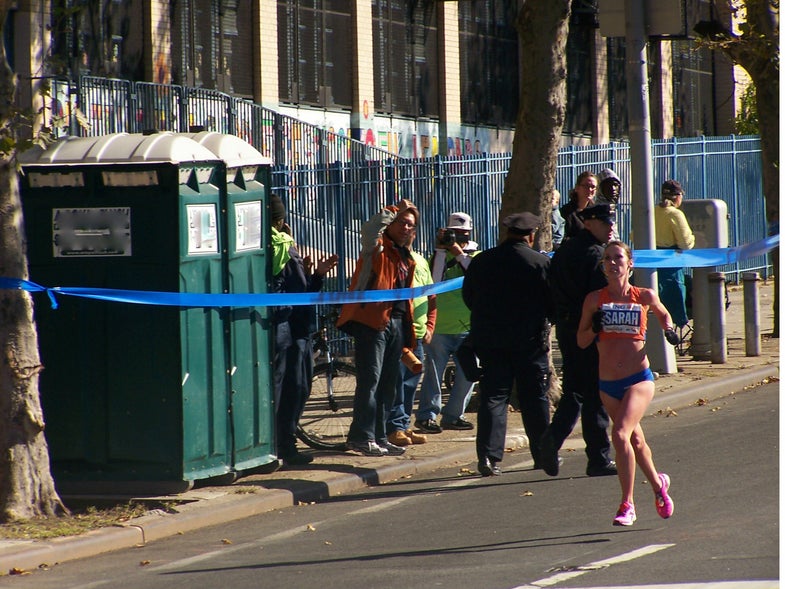 Sarah Porter comes in 21st place in the 2011 TCS marathon, with the help of some portable toilets. Charles Smith / Flickr
SHARE

The last runner has crossed the finish line of the New York City marathon. The sun is setting over the last Gatorade cups left littered across Central Park. But what will happen to the thousands of pounds of poop hidden behind blue porta potty doors?

First question: how much extra poop is there after such an event? For some reason no one is collecting data on this, but we have a few ways of guesstimating.

As a baseline, New York City churns out around 1,200 tons (2.4 million pounds) of biosolids (poo and pee) each day. The average bowel movement for a westerner is around .25 pounds (pssst, eat more fiber), and the average person poops once a day (to say nothing of the common phenomenon of runner’s diarrhea). So it wouldn’t be nuts to assume that most of the runners made a deposit. If all 50,000-plus did, that’s 12,500 pounds of poop before we add in spectators. Another way to look at this, if we’re not going to discriminate against urine, is that porta potties can generally accommodate 60 gallons of various wastes. That’s about 500 pounds of water, and, well, we hope your poop isn’t that watery. If we’re conservative and assume that each of these johns were at least a quarter full, that comes out to more than 250,000 pounds of extra waste (again, we hope a gallon of your poop would weigh more than a gallon of water, but we’re not your doctor). Either way, the marathon poo is a veritable drop in the bucket for the Big Apple. But that’s still a lot of crap to deal with, and you might wonder where it gets carted off to.

spotted, the MVP of the New York City Marathon pic.twitter.com/Fj6CGl0Ag2

Guesses from Reddit include treatment plants, your dinner table, and New Jersey. The first and last answers are partly correct, at least for NYC marathon waste. The excrement from more than 2,000 portable toilets ultimately ends up in treatment plants throughout the five boroughs and the tri-cities, which turn them into fertilizer and water. However, the road to the treatment plant takes some fetid detours.

First, the fecal matter has to leave the site. A vacuum truck crew sticks the nozzle into each individual toilet and sucks up the feculence. “Just like you would clean your carpet with a vacuum cleaner,” says Alexander Rodriguez from the New York City porta potty company Rent a Throne (the business that supplies the porta potties for the marathon were unavailable for comment). These vehicles conglomerate the sludge from thousands of colons and bladders into a septic truck. Any driver could see that eighteen-wheeler cruising by on the highway, with no hint of the churning vats of fecal matter inside.

The separation process would be easy if these treatment plants just needed to process organic matter from human bodies. However, frequent porta potty users know there is more involved; if nothing else, there’s the pungent blue liquid that mollifies the reek of excrement. Some NYC porta potty companies still use formaldehyde—a common chemical also found in particle board production and sometimes in embalming—in that vibrant disinfectant.

The effects of formaldehyde on the human body are complicated. People who work with it every day, like funeral directors, face slightly higher risks of brain cancer and leukemia, according to a study from the Journal of the National Cancer Institute and several others. Formaldehyde is also the seventh most common allergen, which may be more of a concern for the owners of sensitive bottoms. Several states, like California, have banned the chemical from use in public toilets.

To save our collective butts, many porta potty companies throughout the country have switched to biocides, chemicals that break down the kinds of bacteria that cause the worst odors. But when a company carries a truck full of formaldehyde and poop to the wastewater treatment plant, there are some decisions to be made. If the formaldehyde is less than 20 milligrams per liter of the wastewater, microbes can take care of it over time. If the treatment plant has to deal with formaldehyde on a large scale, they can add a neutralizing agent or find a long-term storage site for the chemical. Assuming the formaldehyde is properly disposed of, porta potties are actually a pretty eco-friendly choice—they use much less water than a normal toilet.

After depoopification, the porta potties themselves are wiped down for the next music festival, construction site or 26-mile dash. Though these convenient poop pitstops are often unappreciated, they were crucial for the more than 50,000 runners that completed the TCS New York City marathon this year. Especially since most of them almost certainly had diarrhea.