The 6.9-inch display and 50x-zoom camera make a compelling case for Samsung's $1,300 smartphone. 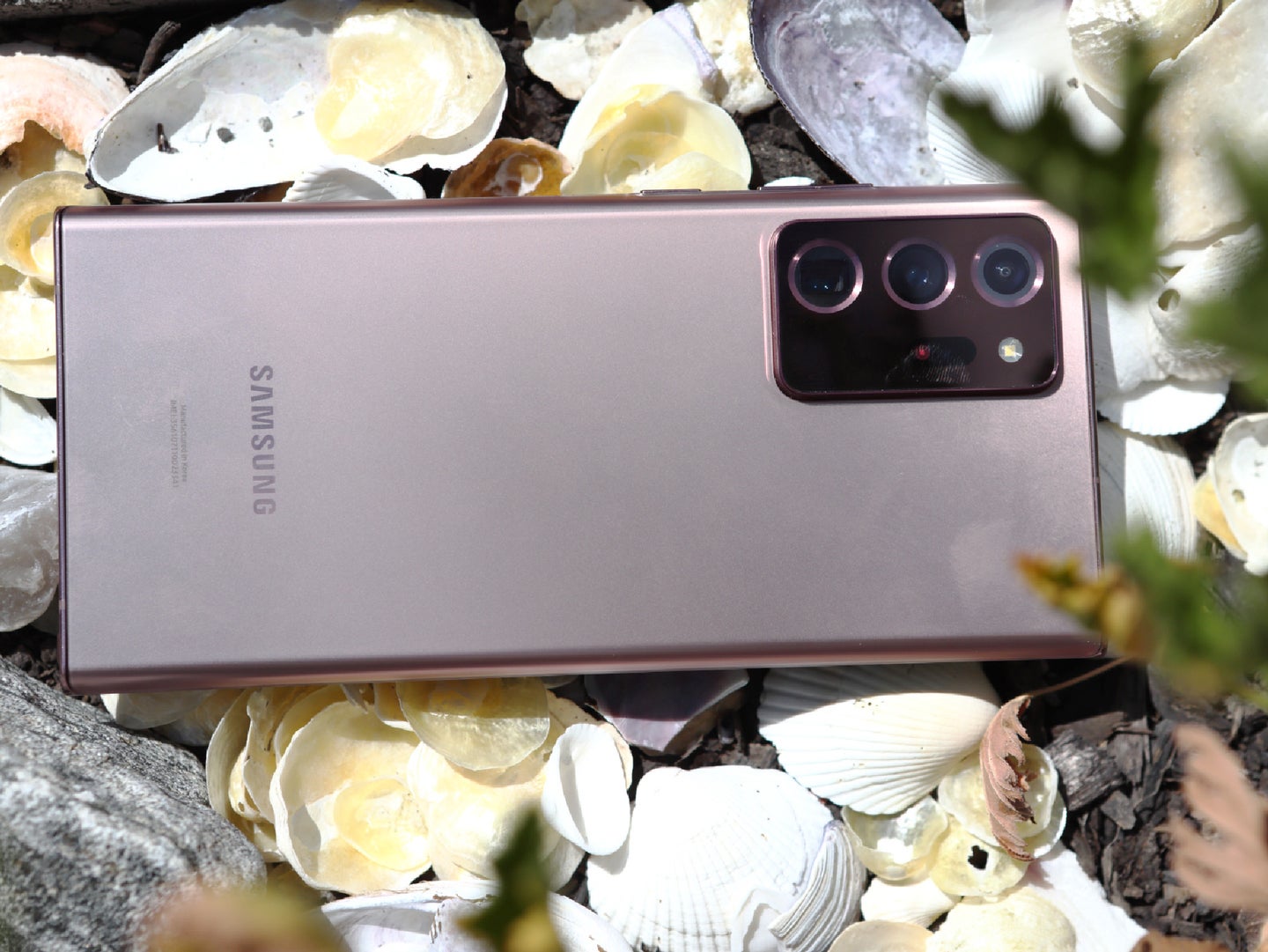 Pictures of phone screens are boring. Here's the back of the phone. Stan Horaczek
SHARE

You’re easily forgiven if you don’t know how much RAM your smartphone has inside. No one will judge you if you’re not exactly sure which specific version of Qualcomm’s Snapdragon processor lives inside your device.

In short, diving into a phone’s spec sheet means different things to various segments of the smartphone-using public. For some, it’s something to pore over and argue about on the internet. For others, it’s an irrelevant math problem that you don’t have to solve in order to fire up the TikTok app. Samsung’s Galaxy Note series devices have always put up big numbers on the spec sheet while trying to make its juiced-up hardware accessible to people who couldn’t care less how much RAM sits under the screen. It’s a fine line and the Note20 Ultra 5G walks it better than any of its predecessors so far.

Evaluating a phone like this is tricky—it’s like a supercar. Some folks want to really dig into the technical guts of the thing, twiddle with the knobs (or, settings, I guess, in the case of a phone), and appreciate the feats of engineering required to wring small performance bumps out of every component. Others, however, are primarily concerned with the flash factor. That 6.9-inch AMOLED screen is every bit as impressive as a swoopy Italian sports car, but it employs some seriously impressive tech to make it shine.

Short version: The Note20 Ultra’s screen is one of the nicest—if not the nicest—smartphone screen around. At 6.9-inches, it’s massive. It feels even slightly bigger than it is because—in typical Samsung fashion—the edges of the screen slope toward the back of the device to eradicate any semblance of a bezel. I’ve personally never been a fan of the curved edges because that screen real estate isn’t usable. The screen is also extremely bright. It promises 1,500 nits of brightness, which, in human terms, makes it easily visible in bright conditions and relatively eye-scorching if you try to use the max setting while doom scrolling before bed.

The really impressive aspect of the screen, though, is its refresh rate. The Note20 Ultra has a maximum refresh rate of 120 Hz. That means the image on screen can change up to 120 times every second. Scrolling at 120 Hz is like floating through a lake of pricy hand lotion (it’s very smooth). That kind of performance typically obliterates battery life, however, so the Note20 Ultra’s screen adapts its refresh rate depending on what you’re doing on-screen. If you’re looking at static images, it can drop all the way down to 10 Hz. Of course, it’s capable of rates between the two because not every app supports, or even needs, that kind of smoothness. When you’re playing a high-end smartphone game or just scrolling through apps, however, it will spoil you for other phones with a paltry 60 Hz spec.

As for resolution, you can pump the Note20 Ultra’s display all the way up to 1440 x 3088, but you can’t run both max refresh rate and max resolution at the same time—even if the phone has enough firepower, you would churn through your battery in just a couple of Quibis.

There are three cameras on the back of the Note20 Ultra. The 12-megapixel wide camera is about what you’d expect from a smartphone super-wide at the moment. The 12-megapixel telephoto zoom lens, however, is more interesting. Like the zoom in the S20 Ultra, the lens sits down into the body of the phone and sees out into the world like a periscope. This gives it more room to move the elements around and enables true 5X optical zoom. Optical zoom is almost always better because it doesn’t crop into the image and magnify flaws like digital zoom will.

The maximum zoom promises 50x total zoom through a mixture of optical and digital and the result is impressive as long as you go in expecting a realistic result. The final images are clear enough to make out, but they’re not going to win you any blue ribbons at the state fair photo contest. At 20x, the results are more acceptable, and you could probably even get a usable Instagram photo out of it if you shoot in a bright setting and hold the camera really still.

The main camera has a 108-megapixel sensor, but you’ll probably never really want to use it to shoot 108-megapixel photos. Instead, it typically combines blocks of pixels together into what we’ll call “ultra pixels” in honor of the phone’s name. That results in images with more reasonable resolution, but lots of detail. Historically, Samsung has not been shy about pouring on saturation and sharpening when using the main camera. I found the Note20 Ultra follows that tradition. Most of the time, the photos are sharp and detailed with vibrant colors. The effect can come off as a bit much if you like more natural-looking images without super crispy sharpness. But, that’s mostly a taste thing.

One considerable change: it now employs a laser for focusing. The Galaxy S20 had a somewhat skittish focusing system. And with all that resolution, a super-wide aperture, and a somewhat large sensor, focusing is actually important with a camera module like this. I found the Note20 Ultra’s focusing system totally adequate in most cases, though, when you get close, it often encourages you to back up slightly and zoom in to 2x. That’s actually a handy and accurate tip for most people and I was glad to see it happen automatically.

From a video standpoint, I still found the iPhone 11 Pro Max image quality slightly better overall, but there’s not a huge difference. The Note20 Ultra lets you shoot up to 8K resolution. If you’re shooting in a situation with a lot of light, that mode can actually be useful for pulling 33-megapixel screenshots out of a video after you’ve already shot it. Shooting 8K for strictly video purposes, however, is mostly a waste. The footage takes up too much space, is hard to edit, and limits some of the shooting features you can use during a shoot.

Samsung has included some clever audio options for video shooting. You can use the built-in microphones, a USB option, or even use the Bluetooth mic in the Galaxy Buds if you want to narrate some action or do voice over. It’s the kind of thing that’s very cool if you know about it and dig into the menus, but I expect many users will never encounter and just shoot with the stock settings.

Expect a deeper dive into the Galaxy Note20 camera in the coming days.

Finally, we arrive at the feature that earns the Note its name. The S Pen still slides into the bottom of the device, but now it has moved to the other side. Samsung has reduced the latency involved with writing on the screen to put it on the same level as the iPad Pro. That makes writing on it feel more natural and satisfying. Even if you can’t draw and your handwriting looks like that of a small child scrambling to finish math homework on a school bus as it barrels down a bumpy road, writing with the S Pen still feels good.

The best writing experience comes in the form of the Samsung Notes app. It makes the most of the improved handwriting recognition for handy features like aligning your scrawled text into neat rows and recording audio as you write so you can hear what was happening as you made a specific note.

The S Pen is still relatively tiny and I wouldn’t want to use it as my primary method of taking notes for a long period of time. But it’s great for writing shorter notes during an interview, especially with the audio playback feature. Even with all of that going for it, it’s still not quite enough for me to shift all of my note-collecting habits over to Samsung’s software, but it was way closer than I would have guessed.

The Note20 Ultra is undeniably impressive. Performance feels very snappy thanks to the latest Snapdragon processor and 12 GB RAM. The high-refresh-rate screen makes things feel even faster because content shows up on the screen immediately.

As you’d expect, 5G connectivity comes baked in and it supports both common types employed by carriers here in the US. I was connected to a 5G network at my house, but certainly didn’t experience 5G speeds that would impress my pals. However, that’s likely more a symptom of the current state of 5G networks than it is anything to do with the phone itself. As the network gets better, so too will the phone.

You likely already know if you’re planning on buying this phone. If you’re upgrading from a previous version, don’t expect a revolution when it comes to experience. If you’re jumping from an older phone, the screen performance really is a big differentiator, especially if you spend a lot of time watching content or playing high-end mobile games. The base model ships with 128 GB storage, which seems a little paltry considering the price, and it’ll cost you $150 to jump up to 512 GB on top of the already pricy phone. When you add it all up, the decision comes down to what you want your phone to do. If you want ample power and tons of opportunities to tweak settings and performance, then you’ll get it. If you want the biggest, flashiest phone around that can handle whatever you throw at it for the next couple years, it can give you that too. Just make sure it’ll fit in your pockets.