If you’ve always wanted the sounds pinging through your brain to move around your head, L-Acoustics L-ISA Studio is a compelling software suite that simulates multi-speaker systems with just headphones. 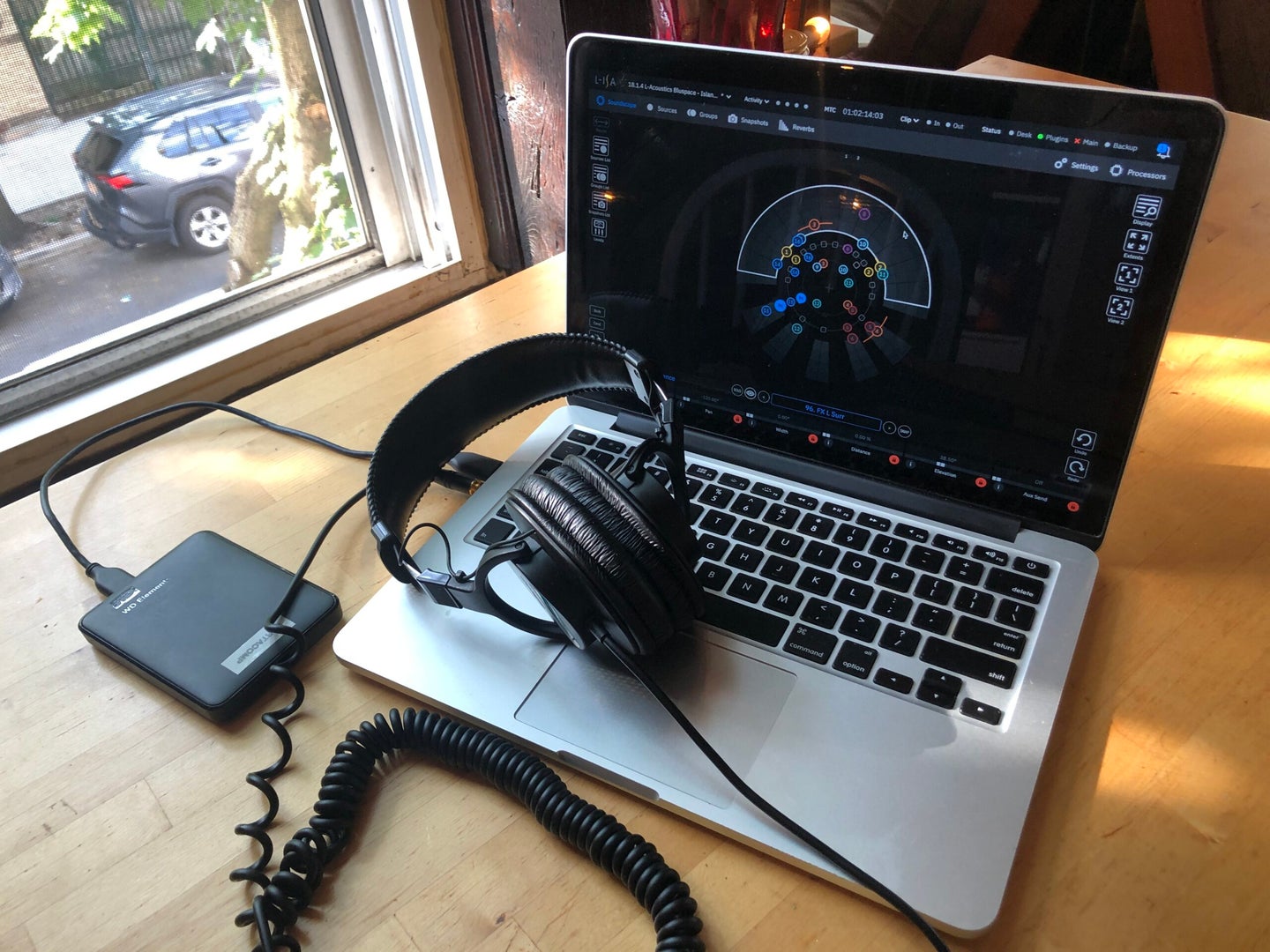 Close your eyes and a coffee shop could be mistaken for a coliseum when you're mixing with L-ISA Studio and a pair of headphones. Julian Vittorio
SHARE

Founded in Marcoussis, just south of Paris, L-Acoustics is a French company with an international reputation for articulate, energetic sound reinforcement. From custom residential sound suites to upscale public spaces to live performance venues, L-Acoustics has pioneered the use of speaker arrays and digital signal processing to sculpt sensory perceptions. Now, thanks to the L-Acoustics L-ISA Studio software suite—the same mix engine behind the clarity and continuity of those speaker configurations—is available to on-the-go sound engineers armed with only a laptop and headphones. After several days mixing in the software at my home studio, I found the room acoustics simulation to be an incredibly powerful, precise tool. I walked away with the following impressions of how L-Acoustics L-ISA Studio can simplify turning virtual environments into real-world experiences.

Getting started with L-Acoustics L-ISA Studio

If you’re looking to take advantage of L-ISA Studio’s hardware routing and deploy it in a multi-channel recording studio or live sound application, the software is available to individuals at a yearly or monthly subscription cost of €290 and €29, respectively (that converts to roughly the same price in dollars, at the time of publication). The scope of this review is limited to L-ISA Studio Version 2.4’s binaural output engine, which is now available to sound engineers indefinitely for no cost and requires no extra hardware to use.

This specific control interface allows the software to provide an accurate and true-to-life rendering of a 3D mix using only a pair of headphones, theoretically expanding options for sound engineers who are accustomed to working in stereo and mixing away from big consoles and purpose-build monitoring stations. I fit solidly into that category, so I tried my hand at using L-ISA Studio to up-mix the song “Alligator” by Billy Cadden. [Full disclosure: Billy is an established musician who I have played with (I contributed guitar to and engineered his track “One in Control”), but he also works at Popular Science, giving us convenient access to song stems.] Thanks to Apple Music’s embrace of Dolby Atmos-processed songs, among other factors, “spatial audio” is a major buzzword in the industry, so it felt like the perfect time to explore mixing in every conceivable dimension.

Installing and setting up L-ISA Studio was time-consuming and fairly convoluted, but a set of brief video tutorials provided all the I/O configuration information required to get started. L-ISA Studio runs exclusively on Mac systems and officially requires a quad-core Intel Core i7 processor at minimum due to the software’s demanding spatial simulation and beefy 96-source capabilities, but I was able to run my 16 sources through a dual-core i5 MacBook Pro without a hitch. Because L-ISA is an “object-based” mixing system, referring to its emphasis on precise placement of sounds within 3D space, I found that much of the setup and audio routing process revolved around “converting” my remix stems into discrete “sources” for the software to manipulate.

L-ISA Studio comes with a rather barebones plugin to assist with digital audio workstation integration—it’s compatible with Pro Tools, Nuendo, Ableton Live, Reaper, Logic, and more—but most mixing takes place in a separate application called the L-ISA Controller. Routing audio sources from the DAW to the Controller begins in yet another program called the L-ISA Processor, which essentially handles all DSP signal processing and initializes a virtual “bridge” that allows users to send sources, mono or stereo, straight from their DAW to the Controller itself. After setting up the L-ISA Processor and designating an output for monitoring, users must then manually link it to the Controller via a separate settings menu. While this makes sense due to L-ISA Studio’s ability to harness multiple processors on different machines over a network, it’s a good example of how users must tell the software exactly what to do at every step.

After the tracks are sent from the DAW to the L-ISA Controller inputs, users are required to manually create individual Sources within the Controller application and link them back to their respective inputs. Then, instances of the L-ISA Source Plugin must be placed on each track within the DAW and linked back to their newly minted Source in the Controller. At this point, routing is mostly complete and users are left to manually engage binaural monitoring within the Controller and route the binaural outputs to the system or an interface’s headphone outputs. Then, and only then, is it time to mix (setup took me about 45 minutes on the first try but can probably be done in about 5-10 by someone who has done it before).

Once the somewhat arduous task of audio routing is complete, interacting with the L-ISA Controller’s graphical user interface feels like a breath of fresh air. Within it, users can load or create a variety of multi-speaker configurations and intuitively move their audio sources around the modeled “venue,” adjusting placement, distance, elevation, width, and panning. The Soundscape interface offers a clear depiction of the 3D space being modeled along with speaker placement and listener position in both top-down and three-dimensional options, and a variety of simple toggles at the top of the window allow users to access the Controller’s grouping, automation, and reverb settings.

“Alligator” is a melodic pop-rock romp with mildly lysergic flourishes. For my instrumental remix, I sent bass, drums, percussion, acoustic guitar, and a number of electric guitars to the L-ISA Controller from Logic Pro X and loaded up an 18.1.4 speaker configuration into the Controller from the provided space presets.

Starting with the drums, I isolated each individual instrument and spent time moving them around the simulated space, adjusting distance and elevation along the way. I repeated this process, slowly adding more elements to the soundscape and making small adjustments until I had what I felt to be a balanced and energetic mix. L-ISA adds no reverb to your mix by default, so I clicked over to the Reverb tab and sifted through the available presets before settling on “small warm ambiance.” The distance source parameter affects the amount of reverb applied, so I went back and adjusted my sources until the mix was rebalanced.

The L-ISA Controller can accept MIDI clock information from your DAW, opening up the ability to automate changes to the source placement as your content plays. Automation can be written straight to the DAW or by using the Snapshots function, which allows users to create changes to the soundscape at specific times. Snapshots can also be set to fade between one another, giving the impression of elements moving around the listener’s head within 3D space. In mixing music, this can be a particularly effective creative tool for marking transitions within the song and bringing elements to and from the foreground.

Compared to traditional stereo panning, which offers very limited placement of elements within a flat soundscape, L-ISA Studio and its implementation of binaural processing is simply mindblowing. Playing everything back through the trusty Sony MDR-7506 headphones, I found it easy and intuitive to find natural, realistic-sounding “places” for instruments and other sonic elements to sit within a mix without clashing with one another. Carving into a traditional mixing is often very time-consuming and requires everything from EQ trims to reverb treatments to get elements competing in the same frequency band(s) to properly gel, but L-ISA Studio got me about 80% of the way there in less than half the time.

Having a third dimension to work with while mixing intuitively makes sense when considering the way speakers behave in real space, and I was beyond impressed with L-ISA Studio’s ability to simulate that effect in a simple binaural mix. In fact, I found that the once-dense mix felt more sparse and spacious through L-ISA Studio, opening up the possibility for adding even more musical elements to the pleasingly plucky Strokes-esque track.

So, who should use the L-Acoustics L-ISA Studio software?

L-Acoustics L-ISA Studio is, first and foremost, an immersive workflow for simulating surround sound, so while it was informative and inspiring to use the software for basic music mixing, its advanced potential makes it more ideal for live sound, cinema, virtual reality, gaming, and other large-scale 3D audio productions where engineers have the time and need the absolute best in acoustic space modeling. It’s in no way just another plugin that you can add to your DAW and integrate with your existing workflow for subtle shifts; L-ISA Studio demands a detailed setup process and singular workflow that reflect its incredible flexibility and L-Acoustics’ roots in years of psychoacoustics and physics research.

L-Acoustics’ decades of integration expertise and its dynamic, distortion-free sonic signature—from the generous textural detailing of its speakers to reference-grade in-ear monitors for discerning mix engineers—are definitely on display. The volume of features is as deep as the volume of space(s) you can design. Within the software are so many options that I wasn’t able to explore with my current mix station: L-ISA Studio is head-tracker compatible; it supports routing to up to 12 physical loudspeakers; it’s compatible with OSC, a network technology built for synchronizing multimedia devices for performances; and the list goes on and on.

All things being equal, however, if you’re a sound designer or audio creator of any kind, L-ISA Studio’s free binaural processing is worth taking a spin for its impressive 3D space modeling alone. It can be harnessed to breathe new life into old mixes or to create entirely new audio content with a precise focus on the listener’s physical experience, which seems to be a unique conceptual angle in the world of music mixing. If you’re a sound engineer who is already familiar with mixing multi-channel content and working with spatial audio, L-ISA Studio’s uncanny ability to simulate acoustic spaces makes it one of the best tools for creating expansive mixes on a compact setup.