And do other neat tricks. Smart lighting that's as easy as screwing in a bulb. 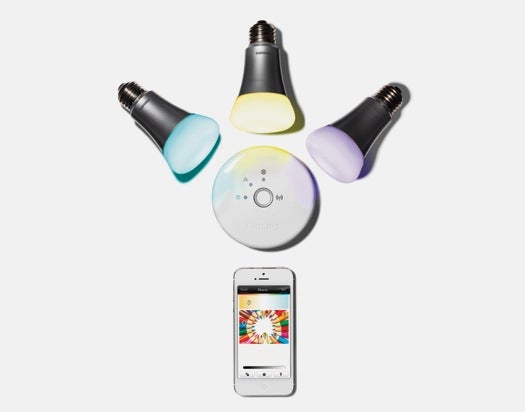 Smart lighting systems allow homeowners to control any bulb in their house, set timers, and dim lights—all from a single control panel. The systems aren’t perfect: They’re pricey, and setup often requires wiring fixtures, which also means professional installation. Philips’s Hue LED bulbs do away with physical networks. Each one has its own radio chip, allowing the bulbs to create a wireless network in mere minutes.

The system consists of up to 50 bulbs, a networking hub, and a smartphone app. After screwing in the bulbs, users connect the hub to their router via an Ethernet cable. The hub communicates with the bulbs through the ZigBee wireless transmission standard and with the owner’s phone over Wi-Fi. The hub sends signals from the app to turn lights on and off, set timers, and control brightness and color. The bulbs can also relay signals to one another, which extends the hub’s initial 200-foot range to cover an entire home.

Philips plans to release the Hue’s code to developers, who could program the system to automate even further. For example, the app could adjust lighting to sync with the mood of a user’s music or to send e-mail alerts when the lights have been left on. One update already set for release: The app will monitor an owner’s location though his phone’s GPS, so the lights will turn on when he gets home.