The Giant Hurdle For The Internet Of Things

Can smart devices work in harmony? 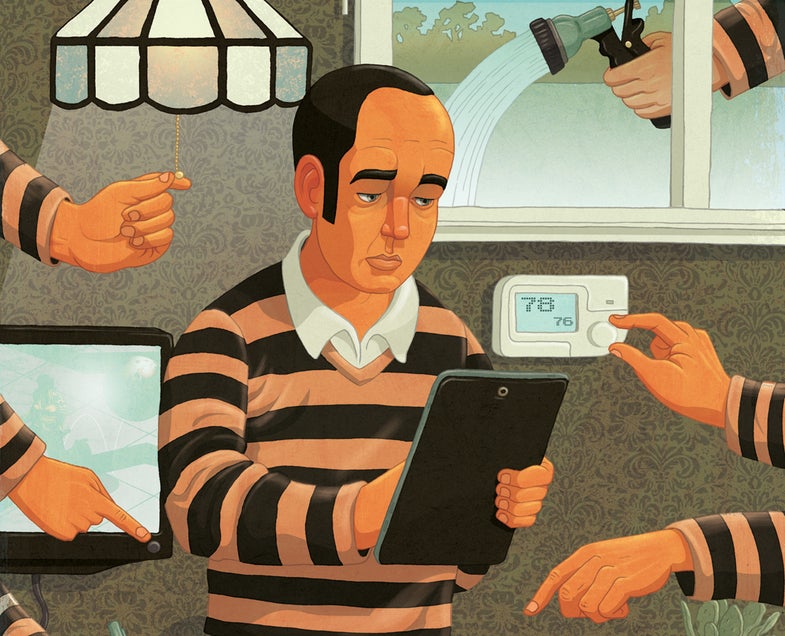 Everyone’s talking about the Internet of Things, a proposed network of intelligent devices that could one day automate much of the world around us. HVAC and lighting systems would adjust depending on a user’s whereabouts. Lawns would know when to water themselves. Meanwhile, product manufacturers have been hastily preparing for this transition. The average household already has 10 connected gizmos, and experts predict that number will jump to 50 by 2022. But making devices and getting them to work in sync are two different tasks. Creating harmony will be the hard part.

Protocols—systems of digital messaging and rules for exchanging those messages—are the glue that binds devices together. For the Web alone, there are at least 50 protocols. Wireless devices interact through a different set of protocols, such as ZigBee, Bluetooth, RFID, and BACnet. And those devices share information with the Web through yet another set of protocols, including 802.15.4e and CoAP.

The result is that the Internet of Things is actually hundreds of smaller, fractured Internets. Devices exist in their own discrete networks, which forces consumers to either choose among them or operate in several at once. Even items that should logically work in tandem—say, smart lightbulbs and a set of Wi-Fi–enabled window blinds—can’t. And each device requires its own smartphone app to control.

Items that should logically work in tandem—say, smart lightbulbs and Wi-Fi–enabled window blinds—can’t. In the short term, engineers are finding ways around these barriers. Revolv, a home-automation company, sells a hub with seven wireless radios that speak 10 wireless languages. The hub automatically connects to any wireless device on a home’s Wi-Fi network, including thermostats, lights, and even garage doors. Smartphone and tablet users can control individual devices or groups of them through the Revolv interface. They can also set up prompts, such as “If I turn on the lights, then reset the thermostat to 71 degrees.” People can patch automated systems together themselves too. MakerSwarm, a new authoring tool by Maya Design, is like a roll of duct tape for the Internet of Things; it lets users cue up long chains of commands through multiple devices. For instance, an array of moisture sensors could send a signal to a sprinkler system.

Patched systems may work for a while, but the Internet of Things will need actual standardization to reach its full potential and really change how we live. IBM, Cisco, and other companies are pushing for an open standard for connected devices. The Message Queuing Telemetry Transport protocol is one option. Facebook uses MQTT for live iOS notifications, but it’s flexible and scalable enough to serve as a kind of http for smart devices. With such a standard in place, the billions of wireless devices may finally be able to talk to one another, so we won’t have to talk to them at all.