Amazon Echoes Its Virtual Assistant Offering With The Dot 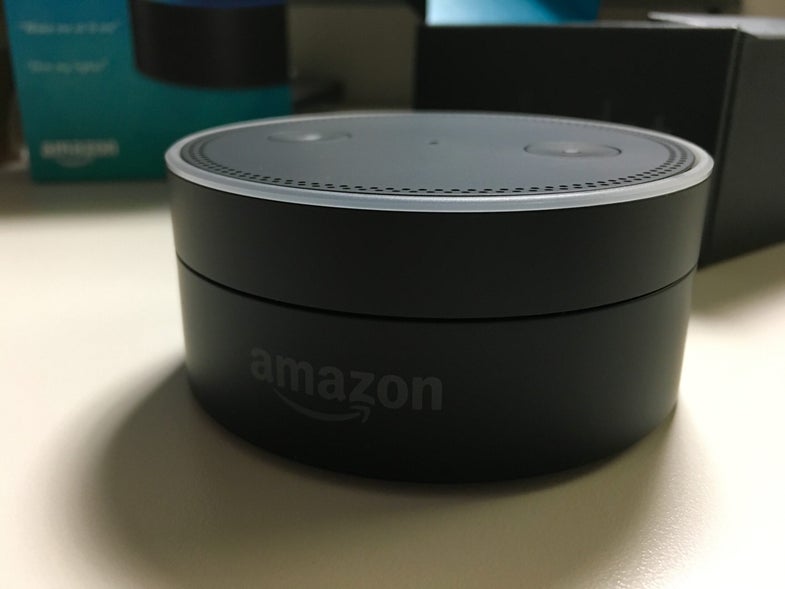 In 2014, Amazon released a tower speaker named Echo. Housed inside of it was Alexa, the company’s virtual assistant meant to take on Siri inside the iPhone and Google Now for Android. Weirdly, the Echo wasn’t attached to a phone like the former two but it could still answer queries, tell jokes, and—of course—complete Amazon purchases. But that was pretty much it. Fast-forward to today and Amazon’s Echo is much more capable, in more ways than one.

Very regular updates to the Echo have introduced support for IFTT, Nest, Spotify, Uber, Phillips Hue, and more. But one of the most compelling updates was made recently to the device’s hardware. Amazon introduced the Echo Dot: a smaller version of the same product, with a few tricks up its sleeve.

Amazon’s Echo Dot is a much smaller offering than the original Echo and the Tap, a new bluetooth speaker also from the company. While the shrunken tower still contains seven microphones used to capture voice, the TKTK(what kind of speaker) speaker has been cut in exchange for a shorter height. To compensate, the online retailer has added something the original Echo should have shipped with in the first place: an external speaker support. And this makes the Echo product much more compelling. At least for those who already own a sound system.

Amazon has added something the original Echo should have shipped in the first place: an external speaker support.

Initially pairing the Amazon Echo is relatively simple, especially if you’ve owned an Echo device before. Setup takes place using the Alexa app on your iPhone or Android device. At the start, the app walks you through pairing the Echo Dot to wifi—the majority of actions will require an internet connection. Once you’ve used your phone to point the Echo Dot to a wifi network, the fun begins. 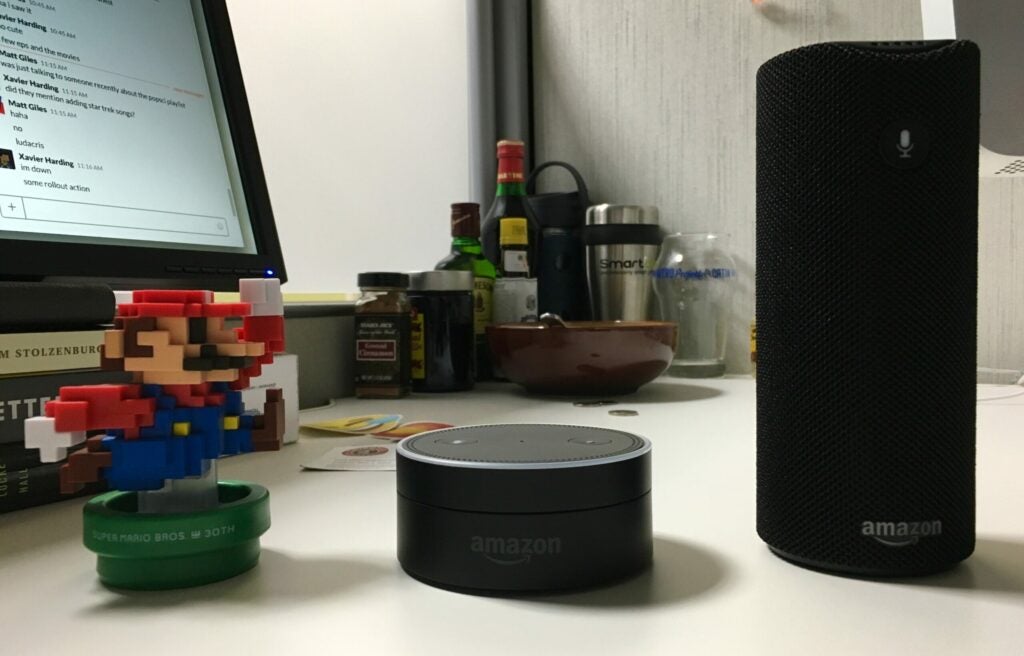 The original Amazon Echo offered the sound quality of a good portable bluetooth speaker. The Echo Dot, in comparison, is noticeably worse; while it’s similarly loud, it has far less bass. But the ability to plug in the smaller Echo to any speaker makes up for this.

Notably, Echo Dot owners are able to connect a speaker via audio jack and pair a separate bluetooth audio source. This means you can leave the Dot plugged in speak to it when you’d like to quickly pair or de-pair (using the phrase “Connect my phone”). Unfortunately, it also means that unless you manually turn on and off the unit, your speakers will need to stay on forever for ultimate ease of use. But using the Echo Dot as a music bridge between your phone and speakers does work to make any speaker set voice activated and wireless, and playing tracks on Spotify or Amazon Music can work without pairing a phone at all.

Unlike the Amazon Echo, the Echo Dot charges over micro-USB. You can plug your Echo into your computer’s USB port or plug into a wall unit using the included outlet adapter. The Echo Dot’s small size and USB plug makes it an easier addition to your desktop over the original Echo.

The Amazon Echo has seen regular software updates from the company and every once in a while receives a big new feature. The inclusion of Spotify meant users of the service could simply speak a song to play it. Support for ordering food from Domino’s allowed just that. Most recently, the ability to control your Nest thermostat with the Echo has been added to Alexa. 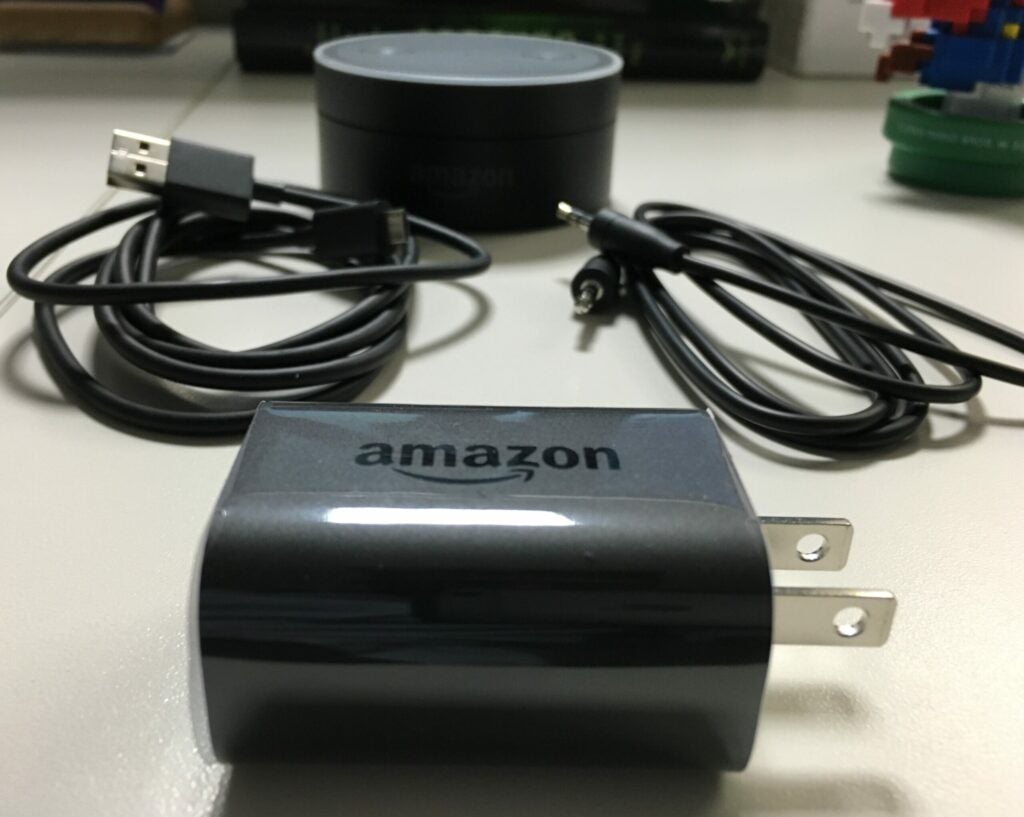 The Echo Dot comes with a micro-USB power cable and a male-to-male audio connector for 3.5mm audio jacks

Unlike the Amazon Tap speaker (which requires pressing a button), getting the Echo Dot’s attention is as simple as saying the name “Amazon” or “Alexa,” depending on what you chose the wake word to be. Alexa won’t let you send texts from your phone or place calls, but getting weather, news, movie times, sports scores, and more are no problem for the assistant. Amazon’s virtual assistant doesn’t gain any new features the Echo can’t do already, and vice versa. Everything that Alexa can do for you in the larger sound tower, it can also do in the smaller hockey puck.

Turning on and off your Phillips Hue light or accessing your Wink hub controls can all be done by voice.

But the best part of the Echo and Echo Dot’s software is how often Amazon pushes updates to the device. Just this week Alexa learned new skills to help interface with the smart home. Turning on and off your Phillips Hue light or accessing your Wink hub controls can all be done by voice. With a steady stream of new features, more and more products and actions could potentially see support.

However, don’t expect any advanced AI features from this, or any, version of Alexa. Google has given users a glimpse of what artificial intelligence can do with their predictive Google Now service. While Alexa may be helpful when you summon her, she can’t predict when you’ll be home and turn on the lights right before you arrive. And don’t think it will hear you closing the oven and prompt you with a 30-minute timer because it knows it’s 6pm and you’re cooking dinner. Through software update, those features could come, but they are just not here today.

The cost of Amazon’s Echo is $89.99. But you’re only able to buy via an Alexa-supported device, such as the older Echo or Amazon’s Fire TV. Unless you use this workaround, of course. But the fact that Amazon has set this arbitrary limitation indicates the company want buyers to more closely consider the original Echo, or at the very least limit supply until more Dots can be made. 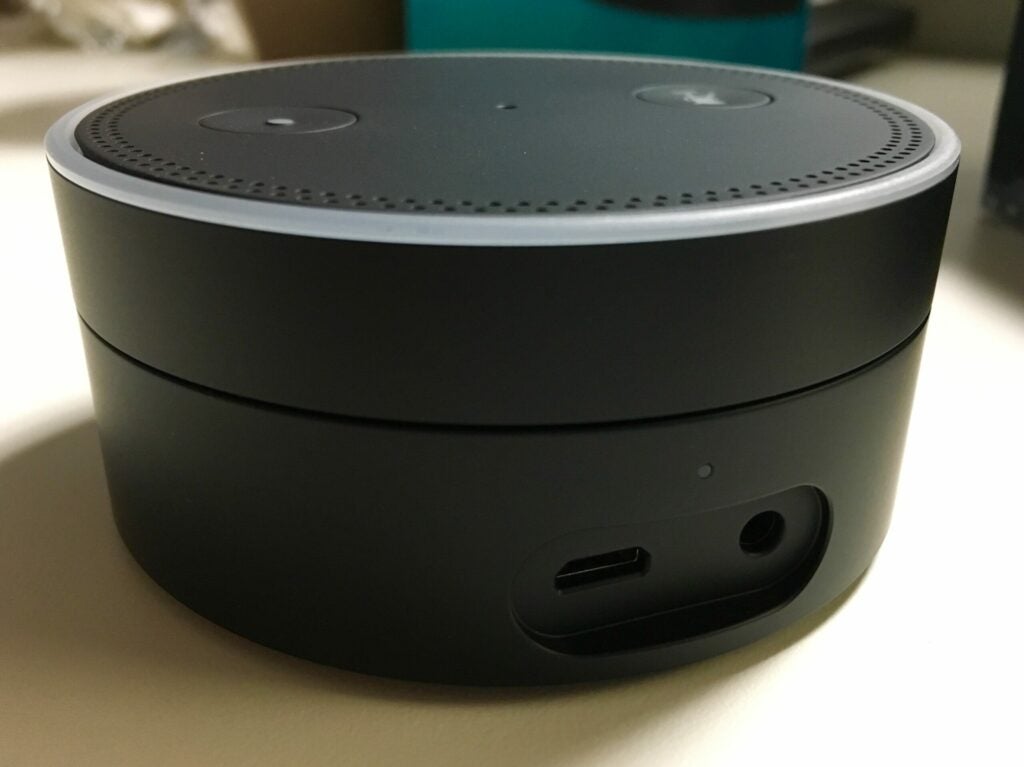 The Echo Dot’s micro-USB port allows it to be powered by a wall outlet or computer USB port.

When comparing the Amazon Echo with the Echo Dot, the latter is a better deal for many home users. Getting Amazon’s bigger speaker is less attractive a proposition than buying the smaller version, with all the same features that lets you pair the sound system of your choosing.

The worst part about the Echo Dot is that previous Echo users can’t trade in their 2015 unit for the smaller, cheaper 2016 model. There’s also no way for the Echo to software update its way to gaining an audio jack. And while the older generation Echo supports Bluetooth, the option to kick out audio to a separate speaker is non-existent.

When considering among the Amazon Echo, Echo Dot, and bluetooth speaker Tap, the Echo Dot may be the best choice for the home. The Tap is one of the few ways to take Alexa with you. And if you plan on using Alexa solely in one room, you may vouch for the more expensive regular Echo. Perhaps buying an Echo Dot along with a portable speaker so that you can take it anywhere with you may be best for those who want the most versatility.

Can connect to an external speaker