Crowdfunded NEEO Smart Remote Wants To Control All Your Devices 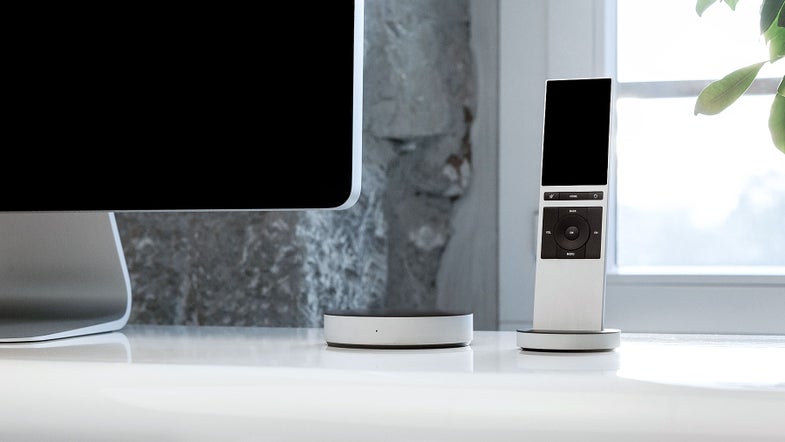 The remote control has been a crucial part of most of our living rooms for decades. Yet as our home entertainment and automation devices have multiplied, we’ve been besieged by a diverse abundance of remotes. (I have a basket in my living room to store all of mine, and I know I’m hardly alone.) Universal remotes have attempted to consolidate all your remotes in one place, but they have had trouble keeping up with the breakneck rate of progress, often relying on older tech like infrared while many devices have moved on to newer wireless standards like Bluetooth. Even smartphones haven’t proved to be an adequate replacement, with their clunky nature and lack of tactile feedback. Now, an ambitious Kickstarter project named NEEO is tackling this problem head on.

The key part of NEEO’s plan is a hub device that can send signals to all of your other devices. This isn’t the first time this approach has been taken—Logitech has a Harmony Home Hub that tries to do something similar—but one thing that sets NEEO’s device apart is the breadth of its connectivity. In addition to controlling traditional devices via infrared, the most common remote control standard, the hub also packs in common standards like Bluetooth 4.0, Bluetooth BLE (low energy), Wi-Fi, 6LowPAN, ZigBee, Thread, and Z-Wave. That’ll enable the hub to control not only devices connected to your TV, but your home automation devices, like Philips’s Hue smart light bulbs.

The team behind NEEO aims for it to work as well with old peripherals as it does with the newest and greatest remotes. They want to make adding new devices as easy and pain-free as possible.

The team behind NEEO wants to make adding new devices as easy and pain-free as possible.

The hub, however, is just one part of the equation. While NEEO’s offering a smartphone app that lets you control your devices, it also recognizes that apps are clunky to use as remotes: It takes time to unlock your phone, find the right app, wait for it to load, and so on. Plus phones lack the tactile feedback that let you use them without having to look at the screen. (And, if you’ve ever had your phone ring while you’re watching TV, you’ll know there’s not exactly a convenient way to quickly mute the sound.) So NEEO’s also offering a physical remote control—albeit with an embedded high-quality touchscreen—that builds in nifty features like hand recognition, which is designed to determine who in your household picked up the remote, and a locator feature that beeps when you trigger it with the smartphone app.

All of this sounds great in theory, but as is this case with so many crowdfunded projects, the proof will be in the ultimate execution. At least NEEO is seeking funding for its initial production run rather than the research and development, which has been done, and it’s promising a relatively short timeline for delivery. While many crowdfunded campaigns are measured on a scale of a year or more, NEEO’s targeting initial shipments this March.

Of course, Logitech Harmony remains the heavyweight in the universal remote market, and NEEO’s a relatively small upstart in the field, so it has a big challenge ahead of it. But sometimes that’s exactly what a stagnant market needs.