The pitch: fill up from any tap, and the bottle's filter removes all the nasties for clean, pure refreshment 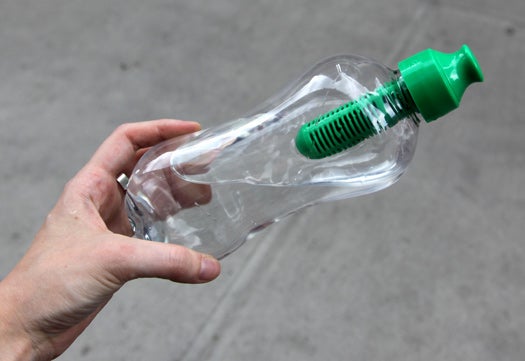 Americans blow $17 billion a year on water, the creators of the Bobble will have you know, and 1.5 million barrels of oil go to making the plastic bottles from which we consume it. The Bobble is the solution — a reusable bottle with a filter built right in.

The idea is brilliant. Fill your Bobble from any tap, and you have clean, free, guiltless drinking water. The filter is made of activated charcoal (the same super-absorptive stuff that goes in your shoe inserts and filters your aquarium’s water) hit with a slight electro-positive charge, which grabs onto any impurities which threaten to taint your refreshment. As you take a pull from the bottle, the water passing through the filter leaves chlorine, hard metals and other odd tastes behind.

The plastic bottle itself is made from recycled materials, and is BPA-free. It reduces anxiety further by coming in a pleasing, easy-to-grasp shape, and it’s small enough to stash in any shoulder bag or purse. And at $9.95 for a suggested 40 gallons of use, it’s as cheap as any non-filtering bottle you might be tempted to buy.

The water is clean, free and guiltless, but half of it winds up running down my shirt. I just couldn’t get the hang of drinking from the darn thing. In order to get the promised effects, the water needs to be forced through the filter, and I could only get it two ways — either by squeezing it, sports-drink style, or by sucking on it like a baby. Because the cap doesn’t flex with the neck of the bottle, squeezing to drink breaks the bottle’s seal, and water pours out the side. So I tried sucking on it instead. But with my first few pulls on the water, I received the distinctive chalky texture of the carbon. (The Bobble’s instructions note that this is normal for the first few uses, and that you shouldn’t worry — it’s just harmless carbon.) After a few minutes of trying, I just took the cap off and drank the unfiltered tap water straight.

Wonderful concept, hampered by the slightest imperfection where bottle meets neck. For a guy like me who pounds through half a gallon of water or more a day, I need a squeezeable bottle that won’t leave me looking like Mr. Dribbles. Nail that, Bobble people, and you’ve solved the bottled-water crisis.

UPDATE:The makers of the Bobble, seeing this review, politely suggested that a hairline crack in the neck of the one I’d tested might have been to blame for the dribble problems I was experiencing. After distributing six newly supplied Bobbles to members of the PopSci staff, a revised Verdict is in order: we haven’t been able to reproduce the problem. Even our editorial production coordinator’s inhumanly strong 4 year-old cranked on the thing for a day at the beach, and water only ever emerged from the nozzle, the way it’s supposed to. To pull enough H20 out of my Bobble, I’ve been developing a sort of two-handed baby-on-a-bottle technique that makes me a little uncomfortable in public, but I can now say, with confidence, that this is my go-to water bottle from now on.