A Kickstarter-funded thermal press pot addresses the major complaint against the French press: grit in your cup 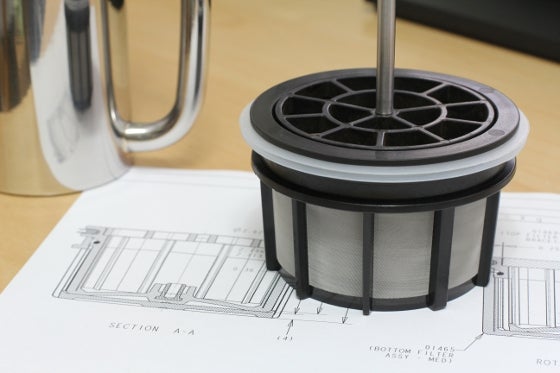 The French press is the simplest, cheapest way to make a legitimately good cup of coffee. Ground beans in pot, water in pot, wait four minutes, press plunger down, pour. But some coffee snobs decry the French press: the coarse screen that “presses” out the grinds allows the bean’s delicious oils to make their way into your cup, but also grants passage to a dreaded interloper: fine sediments end up at the bottom of your mug, or, worse, in your mouth. The Espro Press aims to deliver the taste of a French press without that silt, thanks to an ultra-fine double-filtering system.

The Espro Press, created by Vancouverites Christopher McLean and Bruce Constantine, started out as a Kickstarter project. It’s available in two sizes, one eight-ounce (really, a single mug’s worth) and one gargantuan thirty-ounce (which makes at least four mugs). What sets the Espro Press apart is the filter: two levels of ultra-fine metal mesh, the inner much finer than the outer but both significantly finer than what you’d find in the typical Bodum or other French press. Those filter out even the smallest detectable particles of grounds, so nothing untoward reaches your cup.

Testing was done with, according to Bruce, “a panel of expert coffee tasters” using the SCAA cupping standard. There’s a tricky balance here–the Espro Press isn’t designed to eliminate all sediment, since that’s a major part of what gives a French-pressed cup its texture and flavor. So the inventors had to experiment with different gauges and designs of filter to get it right–identifiable as a press-pot cup, but without unpleasant grit.

The filters in the larger Espro Press, which I tested, are in two nesting bucket-shaped filters, one inside the other. The bucket shape allows enough liquid to pass through so that you can actually press the plunger easily–Bruce told me that the screens are so much finer that he needed significantly more surface area to let enough water through so that anemic gadget bloggers could press it down (I inferred the last part). Oh, and the edges of the plunger are rubber, rather than the spring-and-mesh setup of a Bodum, which creates a tighter seal.

First things first, this is a damn fine-looking press pot. It’s huge and substantial, but in a classy way, all shiny metal and understated curves. It’s easy to clean, with, despite its second filter, much less gunk stuck in hard-to-remove places like in a Bodum screen.

It’s a vacuum-insulated thermal pot, which normally doesn’t make much sense in a French press–typically, you’re instructed to pour the coffee into a carafe or thermos as soon as it’s pressed, since the grounds will keep on circulating through the water even afterwards, leading to overextraction and sour, unpleasant coffee. But Espro says the fineness of the filter (as well as the extra filter) keeps the grounds from interacting with the coffee once they’ve been pressed apart, so you can keep it in the pot without fear.

The coffee tastes very good! In a side-by-side test with a Bodum–same beans, same grind, same amount of water, same extraction time–there was a definite difference. The Espro Press coffee was a little more delicate, a little thinner, than the Bodum. But it’s still definitely a pressed cup of coffee–you wouldn’t confuse it with the light, sometimes acidic cup from a pourover, say. And I actually found the slightly cleaner, clearer cup a pretty pleasant change, if not exactly like a French press. The biggest difference? A serious reduction in grit and sediment, as promised. To be fair, I did find a slight bit of sediment in the bottom of my mug. Way, way less than with a French press, which often leaves, like, entire beans floating in your mug, but enough that it’s worth mentioning. I had assumed there would be absolutely nothing of the sort, but that might just be the risk you run with a press pot. Or it might be the fault of my grinder, a cheapie blade model that gives a pretty uneven grind.

The Espro Press is a balance between a French press and something lighter like a pourover or drip, which runs the risk of failing to satisfy the person who wants a punch in the face of coffee flavor (French press) or delicate clarity of flavor (pourover) or brown sourjuice flavor (drip). It may be that it’s just not possible to get the full French press experience without any sediment. Also, you need to get the ratio of coffee to water just right, although that’s really no different than any other coffee-making device. (For what it’s worth, Bruce recommended 45 grams of coffee for 750mL of water, or 60 grams of coffee for 1L of water. I found that too weak for my taste, and bumped the amount of coffee by about five grams. (Yeah, we weigh our coffee. We are scientists.))

I did definitely find that the pot keeps coffee warm for quite awhile, and that older coffee tastes nowhere near as sour and gross as coffee left in a French press, but it’s still not as good as when it was first made. Not a big deal though. Another quibble: the lid has a cut-out through which you pour your pressed coffee. It rotates, which is fine, but once you’ve pressed it down, there’s no easy way to rotate it into the right position besides sticking your fingers into the steaming crevice and quickly spinning it.

The larger Espro Press sells for $100, while the smaller sells for $70. That’s expensive, considering that you can get a basic 12-cup (the same size as the big Espro Press) Bodum for around $40, and a shrunken single-serving version for less than half that, but remember, these are both thermal insulated. An insulated 8-cup Bodum, smaller than the large Espro Press, runs for $75, so it’s really not too much of a premium if you’re looking at it that way. Of course, there are cheaper options–Associate Editor Paul is very happy with his Nissan thermal press, which only costs $26.

If you’re convinced you want an Espro Press, I’d suggest getting the larger one unless you literally do not know a single other person who might ever want to drink coffee. It’s a small premium for a whole lot more utility.

I like the press a lot! It’s a great-looking press pot to have on your counter, or to impress guests, or to medicate several hungover guests from the night before. The thermal insulating works pretty well, and the construction is solid and impressive. The coffee it makes is very good–it definitely achieves its goal to bring a press-pot cup of coffee without the grit, although since it’s noticeably lighter and cleaner I’m almost tempted to put it in its own category, as a non-French press. But either way, it makes delicious, non-gritty coffee. It is quite expensive, but given its construction, it seems like it’ll last a lot longer than my oh-so-breakable Bodums (plural, sadly, intended), so if you look at it as a long-term machine, it’s not really that much to spend.

The Espro Press is available from scattered retailers now, with more soon to come.

Naomi Major contributed to this review.