One motion-activated kitchen, please, along with with a side of turkey roasted by a computerized oven 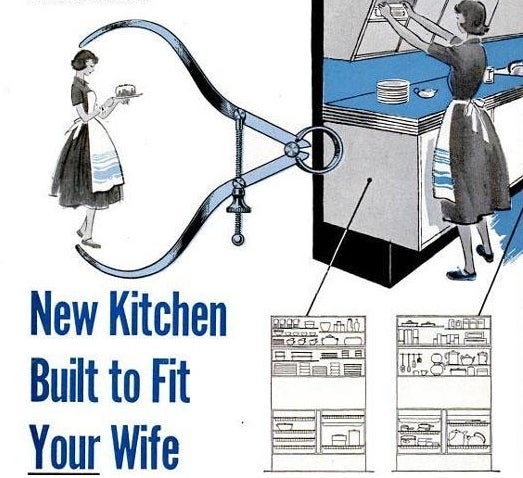 In September 1954, we compared the kitchen to a wife’s workshop. This was the post-war era, after all. The 1950’s are commonly referred to as America’s favorite decade: a golden age of consumerism, economic prosperity, and conservative social mores. While engrossed in the Cold War, the media propagated how wholesome American housewives could enjoy superior household appliances as a reward for the country’s endorsement of capitalism. In the spirit of domesticity, Popular Science published several features geared toward making kitchens as efficient, snazzy and high-tech as possible.

Groceries were her raw materials, and meals were her craft–and in case you haven’t noticed, there have been a lot of exotically delicious wares on PopSci this week. Although you won’t find many lion steaks or endangered species hors d’oeuvres in our archives, you will encounter several instances where the so-called woman’s workshop overshadows her wares.

After studying the movements of housewives at work, engineers at Cornell University decided that people needed to redo their kitchens’ layouts before stocking them with the latest tech. Speed was key: the faster a wife could move about and make meals, the more time she would have to devote to her other responsibilities. Engineers proposed installing adjustable counters, dishwashers, and refrigerated taps.

While those adjustments sound like pretty standard kitchen upgrades, designs grew more fantastic as home developers sought better ways to promote efficiency. General Motors and Frigidaire contributed their visions of motion-activated kitchens and domed ovens that would bake and frost a birthday cake from a bowl of batter.

In what we’ll argue is a happy ending, Betty Friedan put out a book, and women’s household chores were eased up by husbands rather than by robotic ovens. With the exception of ice-dispensing refrigerators and electric burners, kitchens today function more or less like the ones built sixty years ago, but who what will happen during the next couple of decades? We’re still holding out for an oven that can assemble a pizza using an electro-recipe file card.

Put on the coffee, grab a snack, and click through our gallery to see more dream kitchens of the not-so-distant past. 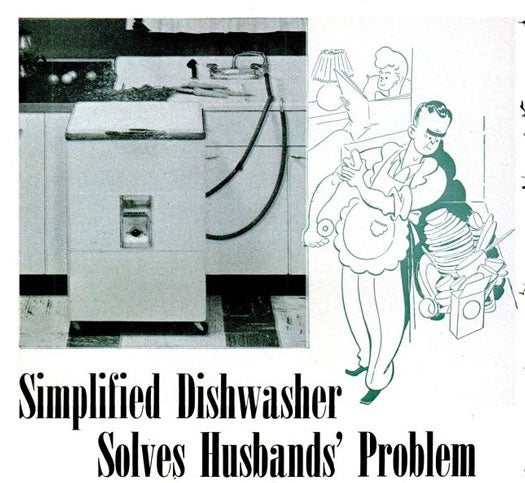 Prior to the 1950’s, dishwashers were found mostly in hotels or large restaurants. The public only really caught on after the use of electrical power became more commonplace, and after William Howard Livens invented a dishwasher small enough for the home in 1937. In 1950, Jerry La Raus developed a dishwasher not only priced at an affordable $169.50, but equipped with hydraulic, rotating jets that could clean the front and backs of dishes. At the time, most household dishwashers only sprayed dishes from the bottom up, which meant that housewives had to wash the dirtier, crustier plates all over again. In anticipation for how La Raus’ improved dishwasher would not only saved time, but would save frustrated couples from a few after-dinner fights, we wrote: “Let this be the story of the husband who got fed up with helping the wife do the dishes–or listening to her talk about the husbands who helped.” Read the full story in “Simplified Dishwasher Solves Husbands’ Problems” 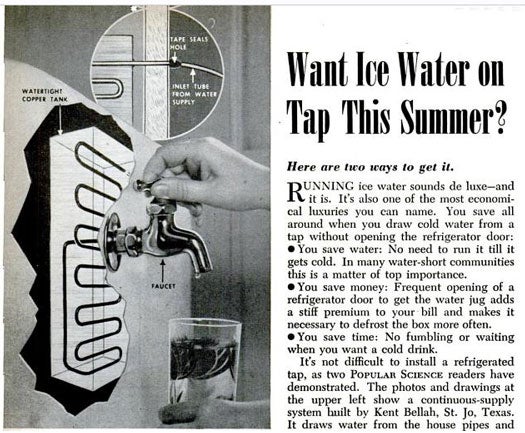 There’s nothing quite like a glass of cold water on a summer’s day. Nowadays, most refrigerators can dispense ice and water, but during the spring of 1950, refrigerated taps were more of a hobbyist’s project than a feature people expected to see in their kitchens in the near future. In this article, we provided two methods people could use to install a faucet on the outside of their refrigerators. The system pictured left draws water from house pipes, and then pumps it through coiled copper tubing inside a water tank in the refrigerator. Read the full story in “Want Ice Water on Tap This Summer?” 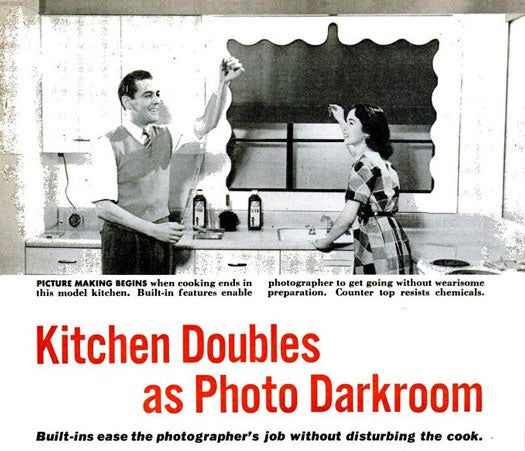 After the war, open-plan, 1 and 1/2 story houses become the norm for families moving out to the suburbs. For amateur photographers, this meant less space to indulge in his hobby. In response to the problem, the General Electric Home Bureau and F-R Corp designed a kitchen could also function as a darkroom. While the combination sounds unlikely, planners took carefully installed a number of “gimmicks” that would let the photographer do his work without interfering with dinner preparations. A heavy green fabric shade could darken the room in broad daylight, while hidden lights beneath the base of a wall cabinet could let photographers replace his wife’s regular light bulb with a safelight bulb. A tall cabinet could double as a broom closet and as a space for drying film. When the brooms are removed, a small electric fan heater at the bottom of the cabinet could work on the film. Read the full story in “Kitchen Doubles as a Photo Darkroom” 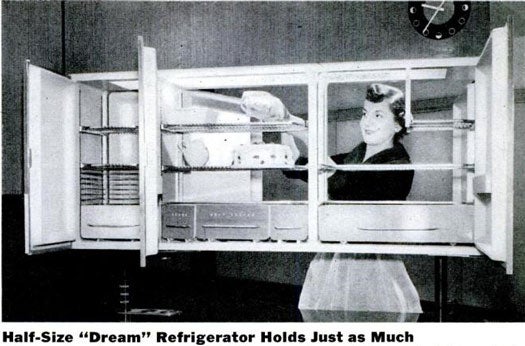 “Is this the refrigerator-freezer of the future?” we asked, when contemplating General Electric’s hanging mini-fridge. This model, touted as the “half-size ‘dream’ refrigerator,” featured magnetic doors that could open on both sides. It took up about 5 cubic feet and used only half an inch of insulation, as opposed to the standard 10 cubic feet and three inches of insulation used in conventional household refrigerators. Nowadays, we know that bar fridges use energy inefficiently, as they release an inordinate amount of cool air when opened, so we can understand why this multi-door model never hit the market. Still, it would have been a pretty slick addition to our kitchens. Read the full story in “Half-Size ‘Dream Refrigerator’ Holds Just as Much” 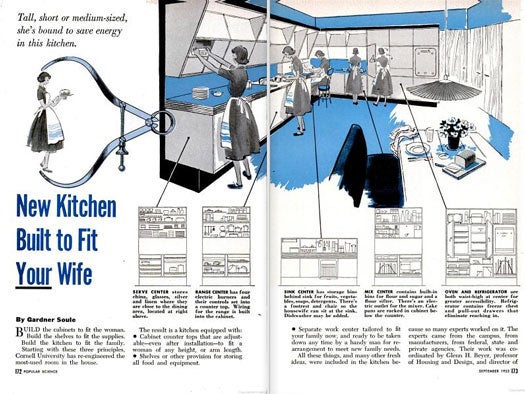 To improve the efficiency of housework, engineers at Cornell University’s home economics department recorded slow-motion movies of women working in kitchens. By studying the subjects’ movements, researchers were able to adjust features of the kitchen to simplify the subjects’ work. For instance, in Cornell’s woman-friendly kitchen, range burners were staggered so that women could watch the cooking more easily. Adjustable counter tops eliminated the need for stepping stools, and cabinet locations were reorganized so that all equipment would be in easy reach. While the average kitchen was just a hodgepodge of appliances and machinery,Cornell’s kitchen was organized into five work centers: the oven-refrigerator section, mix, sink, range, and serving area. Read the full story in “New Kitchen Built to Fit Your Wife” 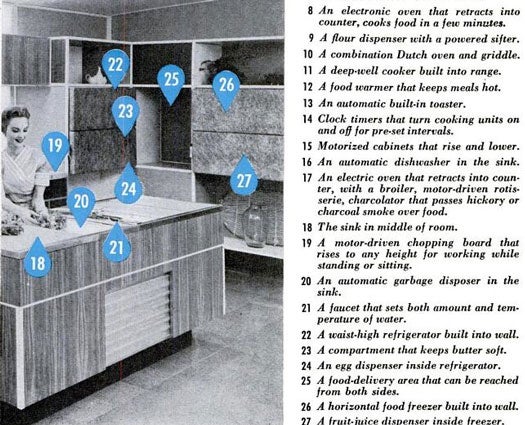 Between 1949 and 1961, General Motors held an auto stage show called Motorama to promote national car sales. Among the Oldsmobiles and Cadillacs was, invariably, something for female audiences: the dream kitchen. GM predicted that in the future, kitchens would hold a ton of ultra-motorized features, including an electric mixers and food blenders that rise out of the counter and motorized cabinets that move up and down. Even a sink in the middle of the room, complete with a retractable oven, seemed a fantastic innovation. Read the full story in “What Would Grandma Say?…If Her Kitchen Had” 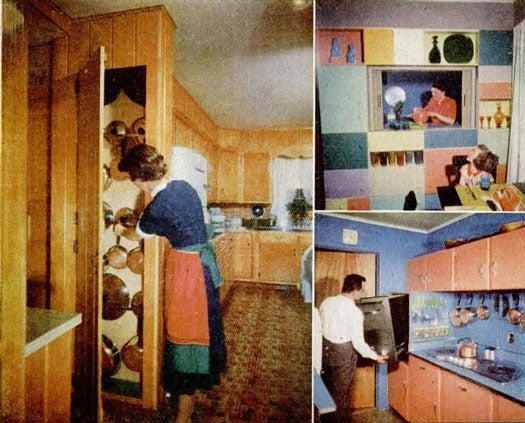 In the same vein as Cornell’s research, “modern kitchen studies” strove to speed up work in the kitchen via technology and inventive design. New range and built-in ovens were small enough to fit in tight spaces, while supply areas are clustered around work centers. Although nowadays we take it for granted that kitchens are filled with drawers and twin cabinets, back in the 1950’s, storage units designed to maximize workspace and minimize dashing around were a big deal. For our readers who happened to enjoy shop work, we provided instructions on building the cabinets pictured left. Read the full story in “How to Build Good Kitchen Cabinets” 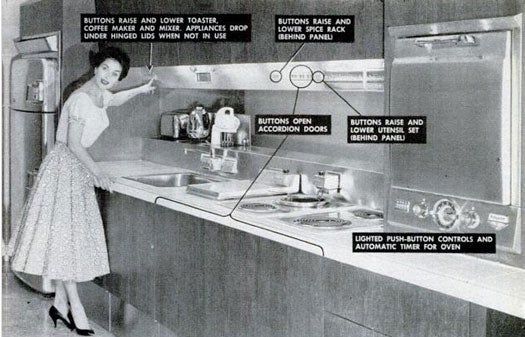 In the future, women won’t need to reach for the spice rack, crank up the oven, or remove the toaster from storage — the kitchen will do all the work for them. This model kitchen was completely button-operated: by punching a few buttons, you could summon the coffee maker beneath hidden panels, and you could make burners start cooking without having to manually light them up. Read the full story in “Buttons, Buttons” 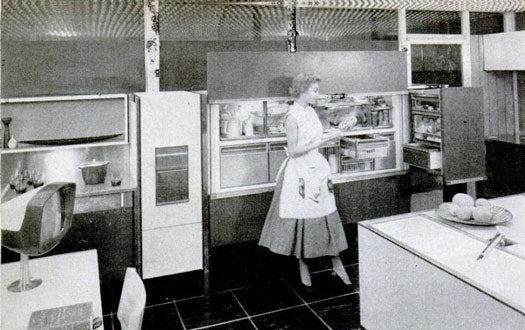 In 1955, General Motors featured another Kitchen of Tomorrow at its Motorama show, and this model contains elements that have yet to become a part of today’s kitchens. Most notably, you can open the refrigerator or answer the phone simply by waving your hand around. A tray hanging from the ceiling transports heavy appliances and ingredients. To the far left is the housewife’s intercom center, which uses a rotating TV to let her know what’s going on in other parts of the house. Read the full story in “Dream Kitchen–No Bend, No Stretch–Almost Runs Itself” 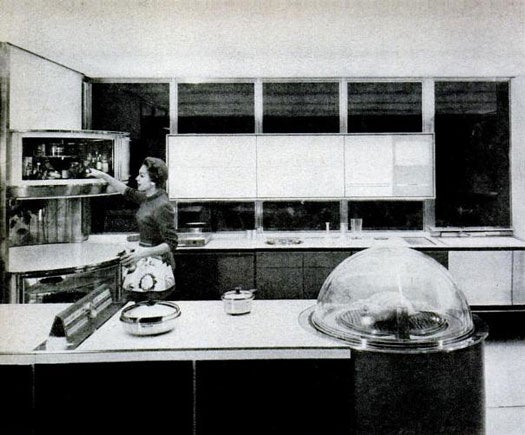 Frigidaire and General Motors’ 1956 Kitchen of Tomorrow is the most iconic of its models, having been immortalized in a 10-minute musical film titled “Design For Dreaming.” In this kitchen, an IBM-manufactured card containing a recipe file would not only display the picture of your dish on a screen, but it would dispense the ingredients and start preparing the dish for you. The clear domed oven, which you can see atop the counter pictured left, could roast a turkey within 45 minutes. If you stuck a bowl of batter in there, a birthday cake would emerge — frosting, candles, and all. In the back corner, a rotating storage system would hold dry, refrigerated, and frozen goods. Electronically-controlled cabinets would use electric motors to rise and lower themselves. If all those appliances weren’t enough, a laundry machine would automatically start washing clothes when the load reached 8 lbs. Read the full story in “A Kitchen to Dream About and Maybe Get–Tomorrow” 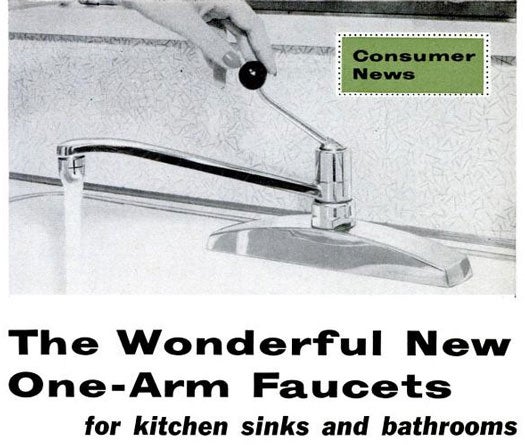 Who knew that such an ubiquitous kitchen fixture would make such a splash? (not pun intended.) We called the “glamorous” one-armed faucet “one of the slickest home improvements since plumbing came indoors,” detailing a series of reasons why consumers would want to do away with their two-handled, screw-type faucets. For one thing, people could adjust the temperature of the water before turning on the faucet. For another, a two-stage valve prevents the drip of screw faucets. Finally, if your hands are occupied, you can turn the faucet on or off with your elbow. Read the full story in “The Wonderful New One-Arm Faucets”
Home
Popsci Archive