The iPhone 4 is the best smartphone on the market, but a potentially serious flaw could be indicative of bigger problems 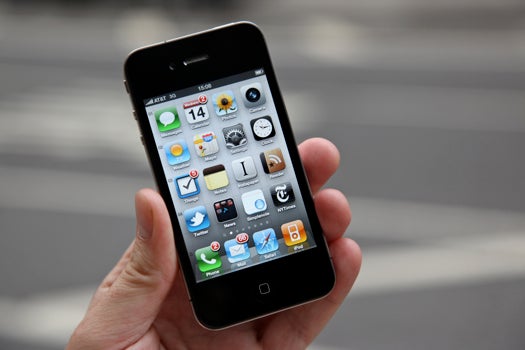 A long, long time ago, Icarus and his father Daedalus did something pretty incredible: they constructed wings out of wax and feathers and flew. Apple too has achieved remarkable greatness–after proving themselves consistently capable of pushing mobile gadgets further than anyone else, here lands the iPhone 4, the best smartphone ever made. Onwards and upwards, to the sun.

But what’s that faint honey smell? And the feathers slowly peeling off, drifting lazily back down to Earth on the wind? There are problems. The wax is starting to melt.

As everyone who’s been following the story is well aware, the iPhone 4 has a design flaw. Its innovative structural antenna–the stainless steel rim of the phone–can be easily shorted out by placing a finger over the small black seam on the lower left hand side. 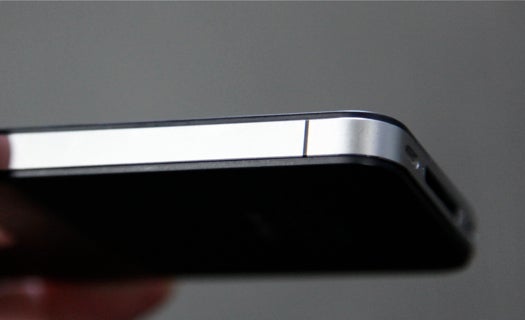 All phones are subject to signal loss if you cup the whole thing in your hands, or cover the antenna just so. But after thorough testing, Consumer Reports this week found that signal strength can drop as much as 20 decibels when the seam is lightly touched (completing the circuit between the two antenna pieces), which is far more attenuation than normal. Enough to slow down data transmission and drop a call–especially if your signal isn’t great to begin with.

Apple has completely botched their public damage control of the issue. Steve Jobs himself has been a source of mixed (and often condescending) signals in his increasingly bizarre email responses to users’ individual queries. First, “there is no reception issue”, then we’re all simply holding the phone wrong or not using a case. And to make matters worse, Apple then issued a surreal press release promising that a software update to recalibrate the signal strength display would completely fix the problem. All of which seems highly unlikely in light of Consumer Reports’ and others’ testing, all indicating a hardware issue. (The release also indirectly acknowledges that Apple has been cooking the books since the very beginning with displayed vs. real signal strength).

That makes the prospect of buying an iPhone 4–which in all other respects is an astonishingly excellent phone–a bit more complicated. I’ve been using one as my primary phone for a week and a half (after a delay in receiving a review unit, we purchased one from an Apple store, which due to high demand took about a week in New York City), and here are some of my thoughts. If you’re still on the fence on whether or not to get an iPhone 4, hopefully they’ll help.

The iPhone 4 packs in the highest-resolution display ever on a mobile phone at 960 x 640 pixels, with a pixels-per-inch density of 326. That’s high enough to render individual pixels completely invisible to the human eye–as long as the graphics being displayed are themselves at a high enough resolution. It’s also the first phone to have an on-board gyroscope for more accurate orientation sensing.

New for iPhones, but not necessarily other phones: the main camera has been upgraded to five megapixels, with an added LED flash and 720p high-def video capture, and a front-mounted VGA camera enables you to have video chats with other iPhone 4s connected to Wi-Fi via Apple’s new FaceTime protocol, take pics of yourself, or use your phone as a mirror. A fast Apple-made A4 processor (the same one in the iPad) ensures iOS 4’s multitasking apps run at a decent clip. And the industrial design has been completely redone, with a flat panel of glass now covering the front and the back of the phone.

So much. The first thing that strikes you is, of course, the “Retina” display. The moment you realize that everything on-screen looks not like a digital image, but a piece of back-lit printed acetate, is breathtaking. The colors and contrast are super crispy, and there are no visible pixels, which is incredible. Text is the sharpest I’ve ever seen on an LCD, and reading longer magazine articles in Instapaper or books in iBooks or the Kindle app is now a much more enjoyable experience. 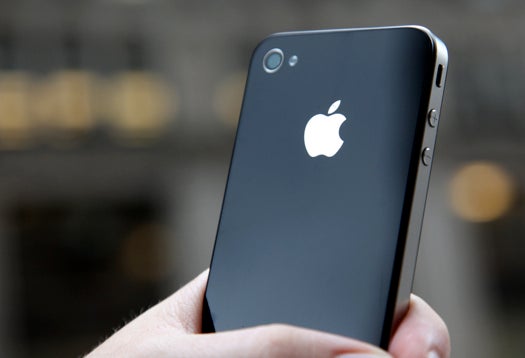 Next is the design. It’s heavier, smoother and more expensive-feeling. This is good and bad; I have yet to drop it, so I haven’t chanced either glass panel’s well-documented propensity to shatter. But in the first few days, I was hyper-conscious of holding something that seemed fragile.

At the same time, the shape and materials are far more satisfying aesthetically than the 3G/3GS’s more rounded, plastic shell. When I have the phone out, I find myself unconsciously flipping it around in my hand or running my fingers around its smooth, cool surfaces–I want to always be touching it, basically. A well-designed object will do that. I felt the same way with the more contoured aluminum of the original iPhone, but not the 3GS I replaced it with–I never really got into the bulgey plastic back. Then again, over the course of two years, I dented my original iPhone to all hell, dropping it several times with no shattering; I can’t imagine the iPhone 4 being as durable, which is the unfortunate downside of Apple designer Jonathan Ive’s aesthetic choices here.

The camera. I always try to keep a good camera on hand, and prior to this week, my phone’s camera didn’t really qualify. Now it does. The iPhone 4 camera is fast, renders colors appealingly, has solid tap-to-focus macro performance (often with nice depth of field variation blurring out the background) and performs decently in low-light.

The speed. I’ve found that the iOS 4 update runs nice and smooth on the 3GS, but friends with older 3G models have reported the upgrade is intolerably slow. On the iPhone 4, though, performance is fantastic, which is absolutely essential to a good experience with a full touch interface.

The design. Even though I’m not babying it as much as I did in those first few days, this phone is not durable, which means that by most criteria, it is poorly designed. I see no reason why the back could not be made of high-gloss black plastic, or even a matte surface of some kind. Ive is passionate about materials, and I don’t believe for a second that he couldn’t come up with several non-glass alternatives that wouldn’t shatter on impact and still preserve the same elegant feel.

The added value over the 3GS. Many will replace their current iPhone simply because a year has gone by and it’s time for a new iPhone. This is what we do now. But for a satisfied 3GS owner, the improvements here may not be worth another 2 year commitment to AT&T and $200 or $300 on top of that. The 3GS is still a great phone.

The reception issue. The other side to the reception issue, voiced by Apple spokesmen like Steve Jobs and John Gruber, is that having a vulnerable point that drops your calls and weakens your connection if the phone is held incorrectly is a minor inconvenience. And in truth, after a week of nonstop use, I have not noticed my AT&T service sucking significantly more than it usually does. But that’s the thing–it always sucks, so it’s hard to tell. So if you’re coveting all the pros here and dive in tomorrow, you’ll have a phone that generally works pretty well.

But just now, while holding the phone and looking at its display, I noticed I’d lightly placed my finger over the antenna’s seam and watched my signal go from full bars to two. I’ve taken the phone out of my pocket and found it had no service in there (for how long I don’t know), with strong service immediately recovered in the open air.

There’s nothing worse than getting a ton of voicemails or text messages from people who’ve been trying to reach you while your phone was not in service for God-knows-how-long. The iPhone 4 seems like it might increase the likelihood of that happening, as well as the likelihood of poor(er) network performance while holding the phone naturally in your hand. 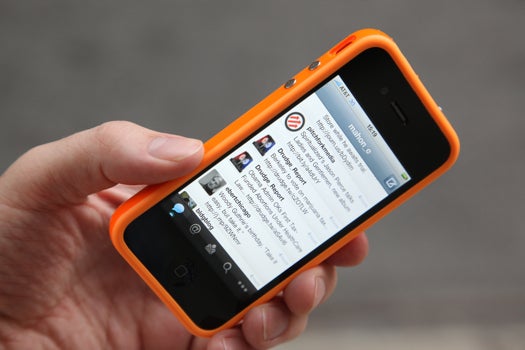 At the iPhone 4 event in May, Apple for the first time announced their own case. It’s essentially a double-wide rubber band, a “bumper,” with strategically placed holes and metal volume button overlays. It costs an absurd $30, and most colors are currently backordered up to 3 weeks on Apple’s site. When they sent our review unit, they included two of them, where before cases were never officially considered essential.

I initially thought this was a backhanded acknowledgement of the glassy phone’s increased fragility, and that constantly shattering phones would be the source of a significant consumer backlash. But in light of the reception problems (and the fact that a non-conductive material placed between your finger and the phone’s antenna seam almost entirely removes any chance of signal loss), it’s not exceedingly crazy to think, at least for a second, that Apple at least knew of and was preparing to deal with this design flaw.

The potential implications of this seemingly innocent introduction of an Apple-branded case says a lot. Rather than acknowledge a problem and delay the phone’s rollout or, more catastrophically (and unlikely), issue a recall–Apple simply pretends that there is no problem, hoping that most users won’t notice. And if they do, that they’ll buy a high-margin bumper for $30.

Apple is starting to lose control, and a lot of it comes down to communication deficiencies. The engineers not communicating with the designers. The customer service and PR folks are not communicating openly and honestly with their customers and the press. It’s evident there is far more internal effort being spent on whether or not to acknowledge a fault, rather than simply fixing the problem.

And lest we forget, we all saw this phone months before its official unveiling and release thanks to Gizmodo, in what will likely remain the biggest gadget scoop of all time. All of these factors equal a palpable shift–Apple is moving from its long-standing position as a counter-culture-embracing underdog to the man himself. Chinks are appearing in the armor. 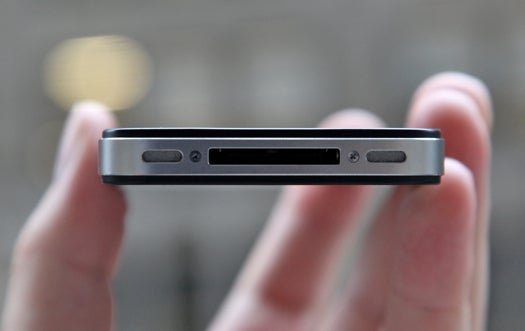 iPhone 4 from the bottom

And before we brush this all off as “just a phone, no big deal,” stop to think about how Apple basically sneezed and then, boom, took over the music industry. How they’re going after book publishing next. How they’re the only company really to figure out a way to get people to pay for software and media on the Internet. How they’re about to pass Microsoft in market capitalization. How seemingly every kid in every American family, even the ones that are working hard for every discretionary spending dollar, has an iPod.

Right now, Apple’s products are steering the future of computing. They’re doing that because they’re better than everyone else’s. The iPhone 4, even with a fairly egregious hardware antenna fault, provides a mobile computing experience that’s better than any to come before it.

Icarus fell to Earth because he was giddy with newfound power. Intoxicated by it. Apple is following in his footsteps, flying closer to the sun with each groundbreaking release. So the question is less about whether the iPhone 4 is a great phone–it most certainly is. The question is, when will it all come crashing down?