As the Android-phone wars wage onward, Verizon and Motorola send their largest, strongest soldier into the field 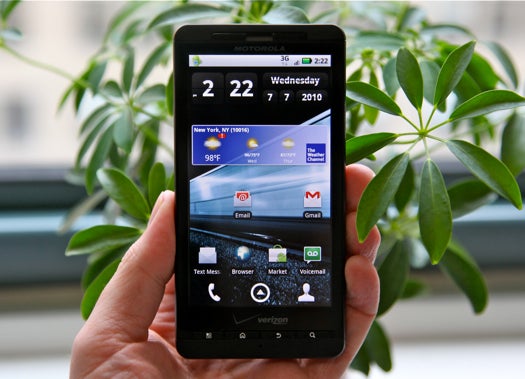 With a face that measures 5.6 inches diagonally, Verizon’s Droid X is the largest handset in the U.S., which sets expectations pretty high right off the bat. Does this massive slab measure up?

The real news with the Droid X isn’t in the hardware, or even the software — at least not yet. Later this summer, the Droid X, thanks to an upgrade to Android 2.2, will be the first phone on the Verizon network to handle full Adobe flash. That’s games, graphics-heavy Web pages, video embeds, the whole enchilada. We’ll keep you updated as soon as the upgrade rolls out (likely on the Nexus One for T-Mobile before anyone else). 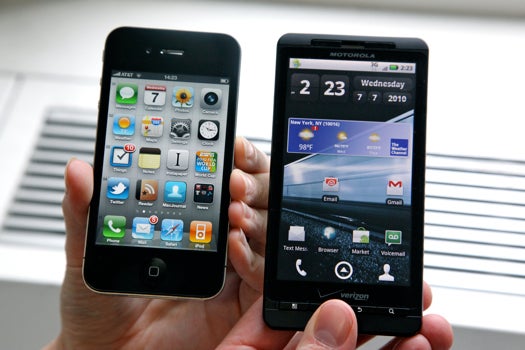 The Droid X joins the Evo 4G in the superjumbo category.

The Droid X has kicked off the clunky keyboard of the original Droid, which I found nearly impossible to touch type on and the sharp corners remarkably uncomfortable when your thumb stretched across it. Much like the EVO 4G on Sprint, its 4.3-inch screen leaves ample room for a comfy virtual typing experience — albeit hard to pull off one-handed on such a massive slab.

As expected, the eight-megapixel camera outdoes most other handsets, though the dual-LED flash can lean towards blinding in a dark room. 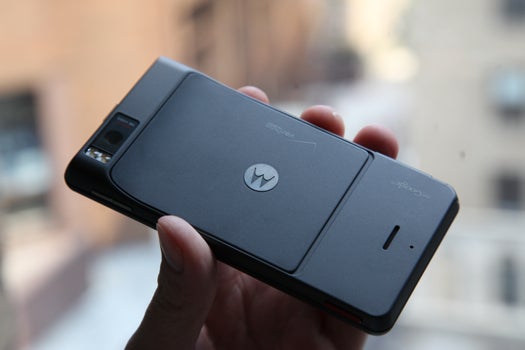 Droid X from the back

Also, for an Android phone, the battery life is actually more than respectable; Verizon’s claim that it can last with full use (a bit of browsing and widget updating along with a phone call or 12) holds up. (Just don’t forget to plug it in the second you get home at night.)

In a word: Motoblur. I’ll admit that when Motorola first rolled out their social-network-heavy Android skin on the Cliq, I was excited to see a phone maker doing something different with this OS and give it a little extra flava. A bubbly interface like that is fine for the relatively underpowered Cliq, but not-so-much for a behemoth like the Driod X that can handle more customization in apps and widgets. And even though the X has a dialed-down version of ‘blur that doesn’t immediately take over the home screen, it still keeps a ton of stuff running all the time that you really don’t need. Each and every time I booted up, I had to kill each ‘blur update task manually to keep it from zapping both battery life and the overall phone speed provided by its one-gigahertz processor. What’s more, the Android Market has ample (ahem, better) options to get all those feeds from Twitter, Facebook, and the like.

While the Droid X is no doubt poised to become Verizon’s flagship Android handset, it would have been better served with Naked Android over the resource-hogging Motoblur widget-ry. Without it, the X could be perfectly positioned as a true smartphone powerhouse, but the add-ons make it feel a little fluffy in the end.