Could Scientists Have Found A Gay Switch? 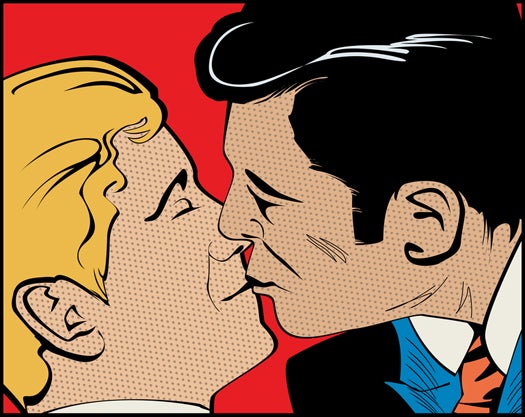 Gayness may not be in our genes, but in the molecules that regulate them. New research suggests that epigenetic factors — chemical “switches” attached to genes that turn them on or off — are a more plausible heritable mechanism behind homosexuality than DNA itself.

Non-genetic changes to gene expression are called epi-marks, for epigenetics, the field of research dealing with the molecular on/off switches. Epi-marks are normally erased between generations, but there’s recent evidence that they’re sometimes passed from parent to child.

Researchers at the National Institute for Mathematical and Biological Synthesis (NIMBioS) looked at how epi-marks that influence testosterone sensitivity in the womb might contribute to homosexuality. Late in pregnancy, natural variations in testosterone levels can alter a fetus’ sexual development. Sex-specific epi-marks protect female fetuses from masculinization in the presence of too much testosterone; boys are protected from feminization if too little testosterone is present.

According to computer modeling by the group, testosterone-buffering epi-marks passed from a parent to an opposite-sex offspring may result in the reverse effect: Girls who inherit sex-specific instructions from their fathers will be partially masculinized, while boys who get epi-marks from their mothers will be partially feminized. In this model, homosexuality occurs when stronger-than-average epi-marks influencing sexual preference from an opposite-sex parent escape erasure and are then paired with weaker-than-average sex-specific epi-marks produced in opposite-sex offspring.

The model suggests that sex-specific epi-marks have survived because they’re highly beneficial for parents’ fitness and are only infrequently passed on to offspring, where they may reduce reproductive fitness.

“The study provides a very interesting, but as yet untested, genetic mechanism for the evolutionary maintenance of human homosexuality,” says Nathan Bailey, an evolutionary biologist at the University of St Andrews in Scotland who was not involved in the research. “We are going to have to wait until more evidence is in, but I do think it would be exciting to know whether epi-marks contribute to the expression of sexual orientation in humans.”

Study co-author Sergey Gavrilets, a professor of ecology and evolutionary biology and mathematics at the University of Tennessee, Knoxville, and associate director for scientific activities at NIMBioS, says there could still be a “gay gene” or genes, but that there are problems with the idea: “Nobody has been able to present solid experimental evidence for this in spite of significant effort.”

The search for genes that control sexual orientation is based on increasing evidence of a strong genetic component. Studies clearly show that homosexuality runs in families, with an increased rate among siblings and the maternal uncles of gay men, according to a 2011 review.

A study published online just last week by Italian researchers Andrea Camperio Ciani and Elena Pellizzari found that the maternal aunts and grandmothers of gay men have more children than those of straight men. A few years ago, Ciani used genetic modeling to explain the 2004 finding that sisters and maternal aunts of homosexual men have more children than the females in the maternal line of straight men. According to that model, at least one unknown gene on the X chromosome predisposes female carriers to higher fertility and male carriers to homosexuality. “The genes evolved for the fecundity benefit in females, at the reproductive cost of an increase in homosexuality in males,” Ciani explains.

Gavrilets says the theory is compatible with his. Both “provide an example of sexually antagonistic selection, when some traits are maintained in the population — in spite of being deleterious in one sex — because they are advantageous when expressed in the other sex,” he says.

Meanwhile, a study published online yesterday provides what may be the first evidence of a direct reproductive benefit for same-sex sexual behaviors in males. Researchers at the University of Frankfurt found that female Atlantic mollies, a type of fish, may switch their usual preference for colorful males to drab males after observing the less-desirable fish engaging in sexual behaviors with their more vivid counterparts.

The researchers theorize that bisexuality directly benefits male Atlantic mollies thanks to the phenomenon of female mate choice copying, in which females prefer males that they’ve seen engaged in sex. (“Displaying mating behavior conveys information not only about a male’s readiness to mate, but also mate quality, as performance is associated with costs,” the authors write.) Usually female mate choice copying occurs after observing heterosexual couplings, but this study demonstrated the same result with same-sex partners.

Female mate choice copying has been observed in animals ranging from fruit flies to birds to humans. Evolutionary biologist David Bierbach, the study’s lead author, says it can’t be ruled out as a potential driver of male bisexuality in our species.

Evolutionary adaptations, of course, aren’t the whole picture. Heritable factors, whether genetic or epigenetic, only explain perhaps 20 to 50 percent of variation in sexual preferences, Gavrilets says. “Recent studies suggest that sexual orientation (as nearly all behaviors) is based on the genetic constitution of an individual, as well as on environmental factors the individual experienced in certain life stages,” Bierbach says. “Nature and nurture.”

Bailey adds, “The idea of a ‘gay gene’ is overly-simplistic. Biologists know that complex traits such as sexual orientation develop from interacting genetic and environmental effects, and [the NIMBioS] study doesn’t change that view.”

Jennifer Abbasi is a science and health writer and editor living in Portland, OR. Follow Jen on Twitter (@jenabbasi) and email her at popsi.thesexfiles@gmail.com.