A Synthetic Dog Made Of Nightmares, A Nerf Drone, And Other Amazing Images

Plus, the spectacular birth of a star 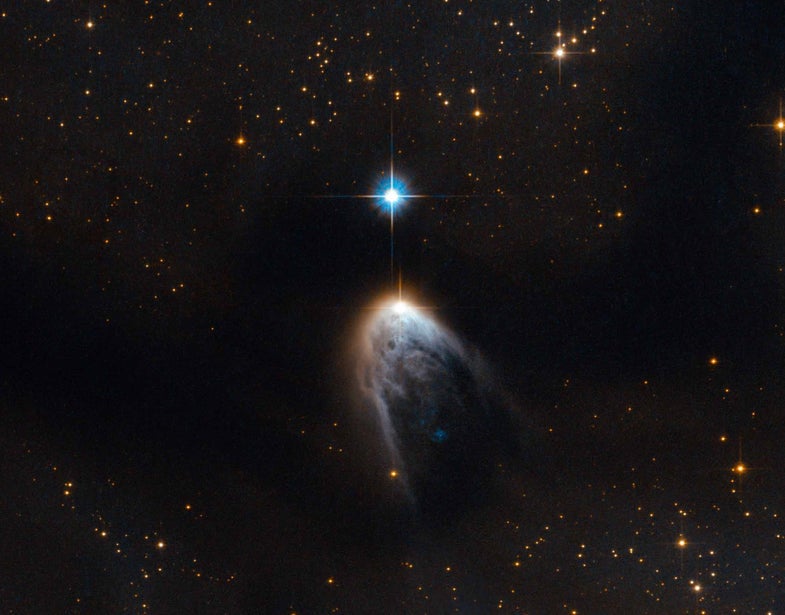 This new Hubble image shows IRAS 14568-6304, a young star that is cloaked in a haze of golden gas and dust. It appears to be embedded within an intriguing swoosh of dark sky, which curves through the image and obscures the sky behind. This dark region is known as the Circinus molecular cloud. This cloud has a mass around 250 000 times that of the Sun, and it is filled with gas, dust and young stars. Within this cloud lie two prominent and enormous regions known colloquially to astronomers as Circinus-West and Circinus-East. Each of these clumps has a mass of around 5000 times that of the Sun, making them the most prominent star-forming sites in the Circinus cloud. The clumps are associated with a number of young stellar objects, and IRAS 14568-6304, featured here under a blurry fog of gas within Circinus-West, is one of them. IRAS 14568-6304 is special because it is driving a protostellar jet, which appears here as the "tail" below the star. This jet is the leftover gas and dust that the star took from its parent cloud in order to form. While most of this material forms the star and its accretion disc — the disc of material surrounding the star, which may one day form planets — at some point in the formation process the star began to eject some of the material at supersonic speeds through space. This phenomenon is not only beautiful, but can also provide us with valuable clues about the process of star formation. IRAS 14568-6304 is one of several outflow sources in the Circinus-West clump. Together, these sources make up one of the brightest, most massive, and most energetic outflows ever reported. Scientists have even suggested calling Circinus-West the "nest of molecular outflows" in tribute to this activity. A version of this image was entered into the Hubble's Hidden Treasures image processing competition by contestant Serge Meunier.
SHARE 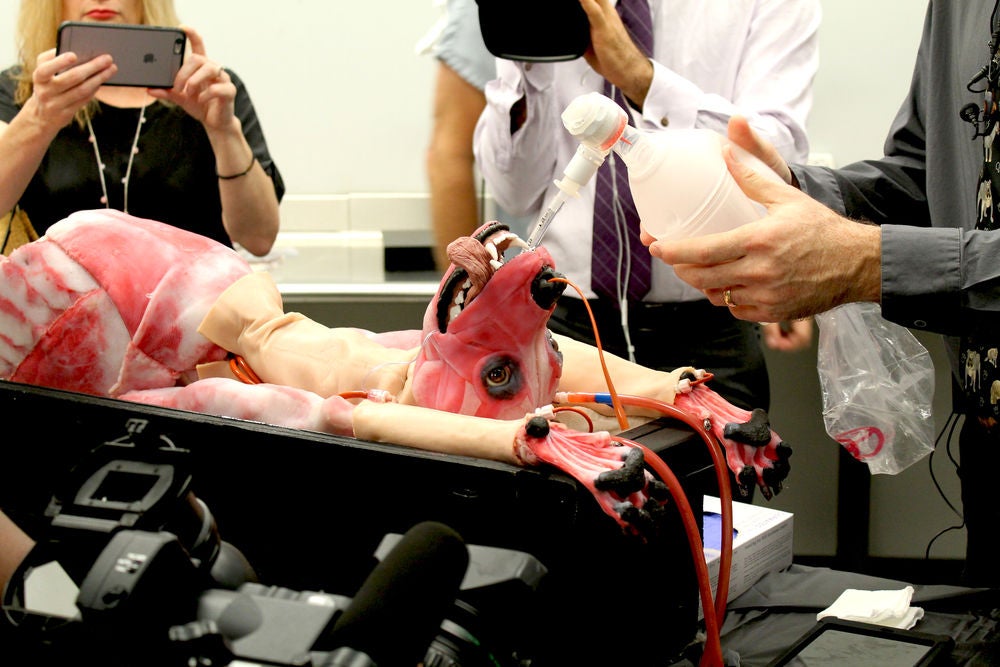 Biotech company SynDaver Labs has created a synthetic, skinless dog because we didn’t want to sleep tonight anyway. Despite its gruesome-looking appearance, though, the dog will actually be used to train veterinarians who currently must train on real dogs (sorry, pups). The developers are currently trying to raise $24 million to provide 20 dogs to every veterinarian college on Earth. Needless to say, that’s quite a lofty goal. 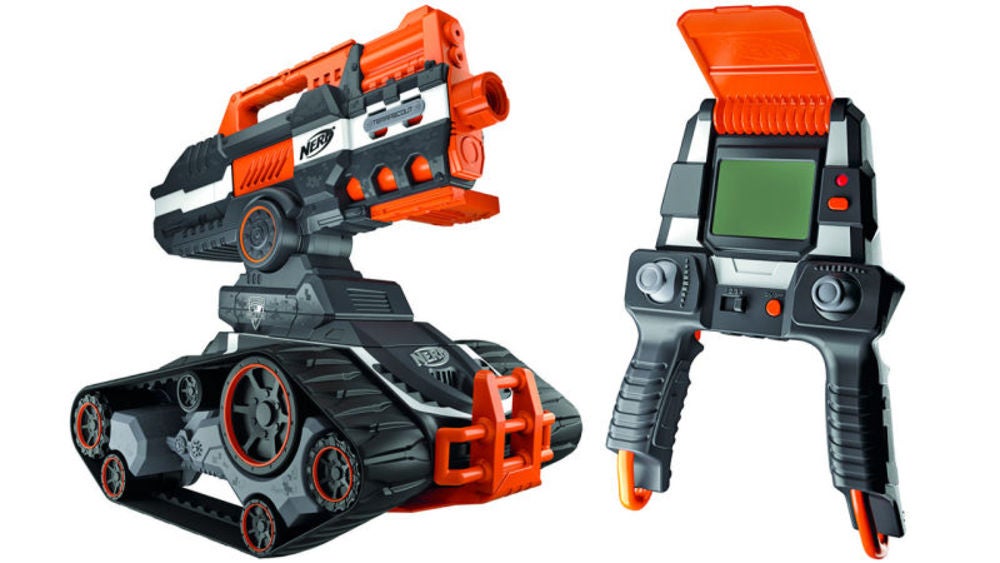 If you have a spare $200 laying around and want to buy something awesome to annoy your roommates with, Nerf may have just the thing for you: the TerraScout. Gone are the days of yore when Nerf guns were simple pump action dart-lobbers because this new device, a crawling drone complete with a video monitor, has ushered in a new era of foam-slinging warfare. So far, there is no word if Nerf will eventually produce an aerial drone, but we wouldn’t put it past them. 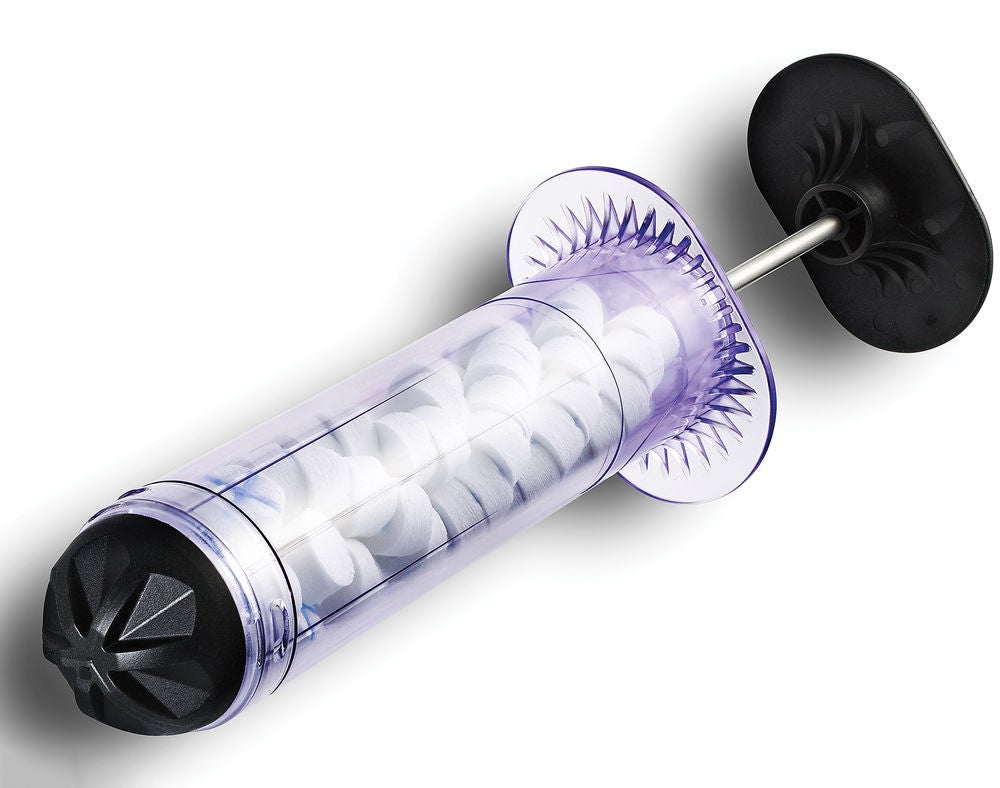 This comical-looking device is a literal lifesaver, which it just proved for the first time by saving the life of a coalition soldier who suffered a gunshot wound to the leg. It’s called the RevMedx XStat, and it’s pretty much a syringe filled with compact sponges designed to stop internal bleeding before a person dies. We covered the device before back in 2014, but now we know it actually works. Hopefully, you will never be at the business end of this thing, but at least it exists just in case. 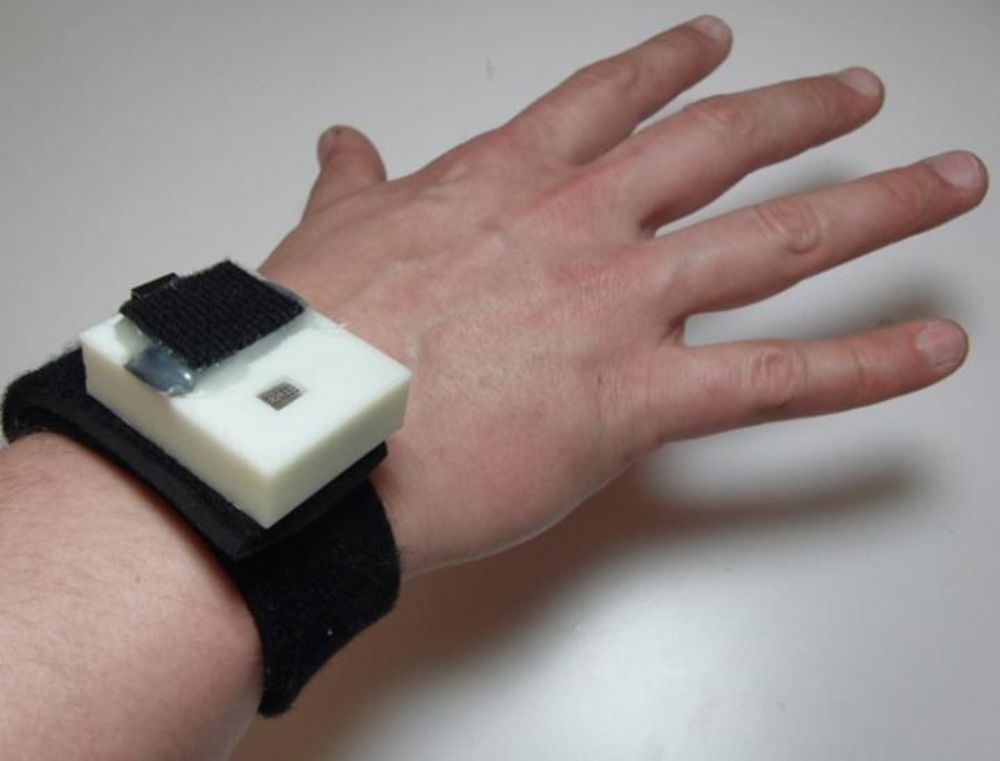 With over 24 million people affected by the condition in America, you likely know someone who suffers from asthma, but even if you don’t you most likely know that an asthma attack is deadly serious business and knowing when one is about to come can make all the difference. This new device, called the Health and Environmental Tracker (HET), works like other wearables except, instead of making you feel bad about only taking seven steps today, it can help asthma sufferers predict their attacks by monitoring their vitals alongside environmental factors.

The Birth of a Star

Meet IRAS 14568-6304, an infant star that is just kicking off its celestial existence. You can kind of see it peeking out from behind that cloud of gas, which scientists call a Circinus molecular cloud complex. The image was captured with the Infrared Astronomical Satellite, and the ESA officials who took is describe it wonderfully by saying: “This young star is breaking out. Like a hatchling pecking through its shell, this particular stellar newborn is forcing its way out into the surrounding Universe.”

Lying 7,000 feet below the surface in Hawaii’s Papahānaumokuākea Marine National Monument, this 12 foot by seven foot sponge is reportedly the largest in the entire world. While no one is quite sure how old the behemoth is, the researchers, who recently published a study about the ridiculously large creature, say sea sponges can live for an estimated 2,300 years. It was found in 2015 using NOAA’s Okeanos Explorer. The scientists didn’t mention if the sponge was flattered or offended by its new title. 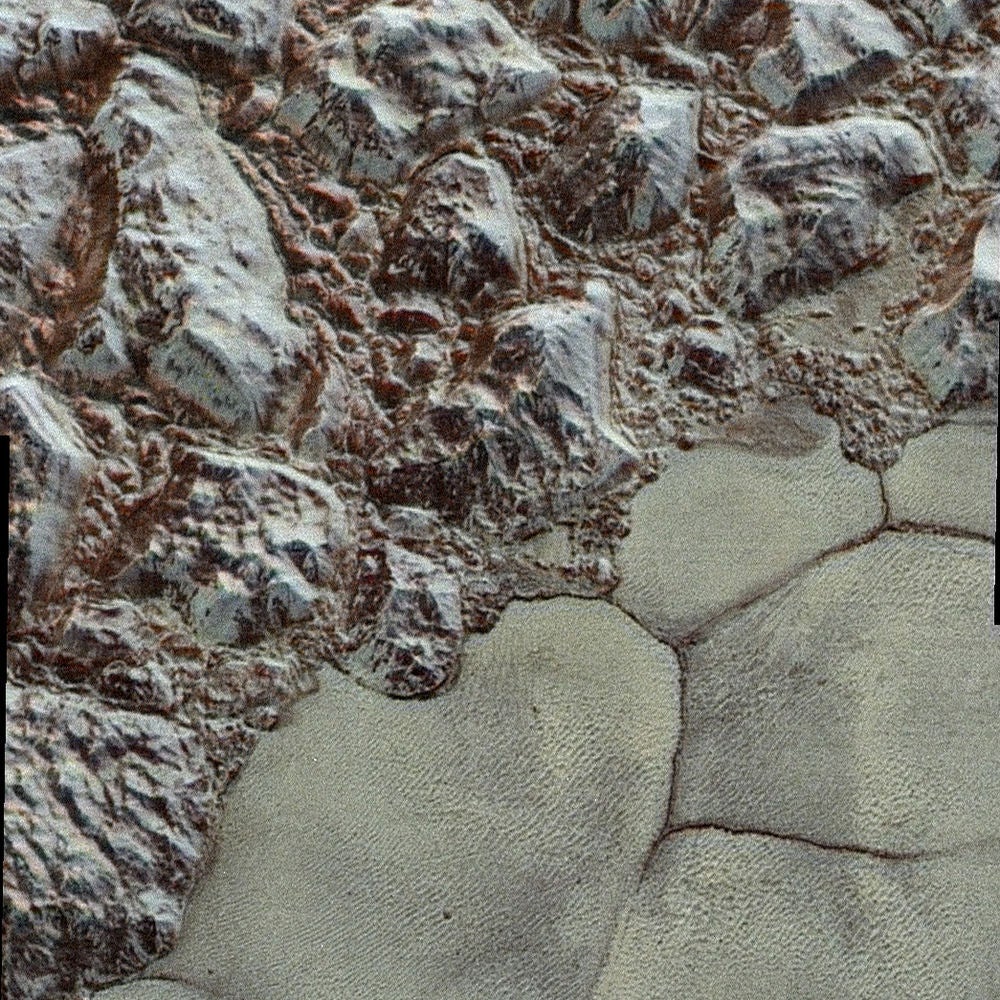 Since NASA’s New Horizons spacecraft beamed back pictures of everyone’s favorite icy dwarf last years, people have been in love with Pluto’s ‘heart.’ Scientists, however, have been more concerned with how this odd region formed and now they finally have the answer: nitrogen ice. According to the team, nitrogen ice below the heart-shaped region comes to the surface, making polygonal patterns of ice, keeping the landscape looking younger than the rest of Pluto. 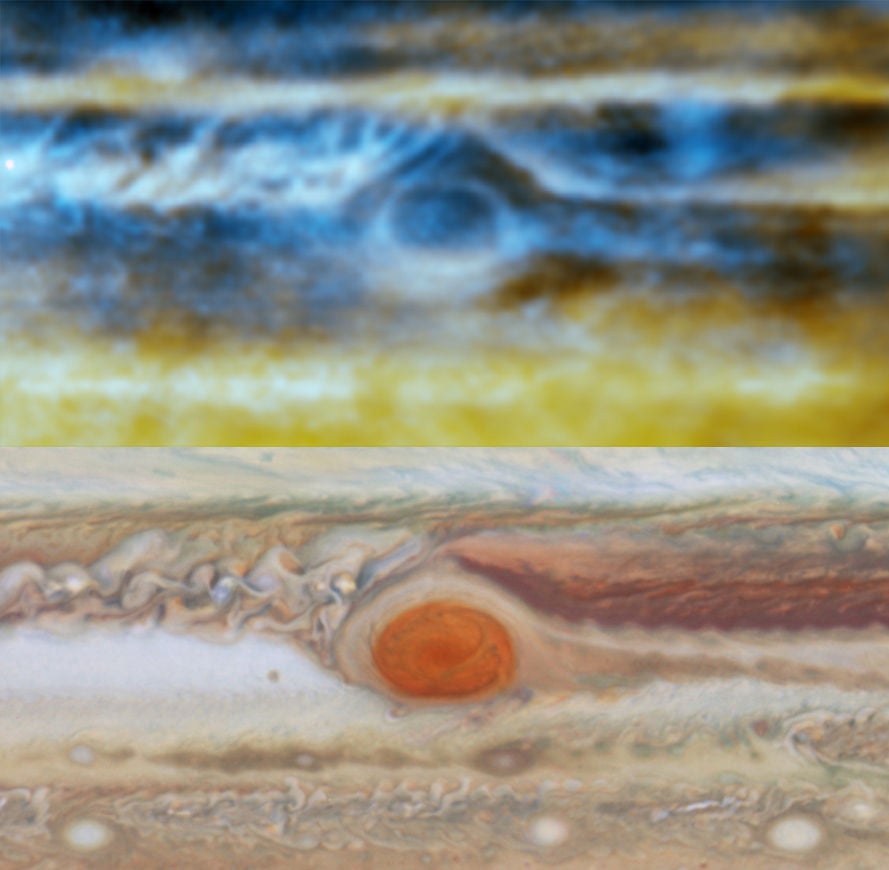 Researchers have finally figured out how to see what lies beyond Jupiter’s thick clouds! No, there wasn’t a group of aliens hiding behind it (sadly). Instead, the team, who used the Very Large Array for their study, found a whole bunch of ammonia gas, which they captured in this beautiful new image (the top is the new picture and then bottom is what we’re used to seeing).

If you’re a boy king who wants to stab his enemies with only the most quality of daggers, maybe you should take a note from King Tut, the Ancient Egyptian ruler who died at age 19 after 10 years as pharaoh, and buy a space dagger. Yes, a space dagger. Researchers have recently used X-ray scans to determine that King Tut’s famed iron dagger was actually made out of meteoric iron, which, next to obsidian, is the coolest type of knife you can buy. 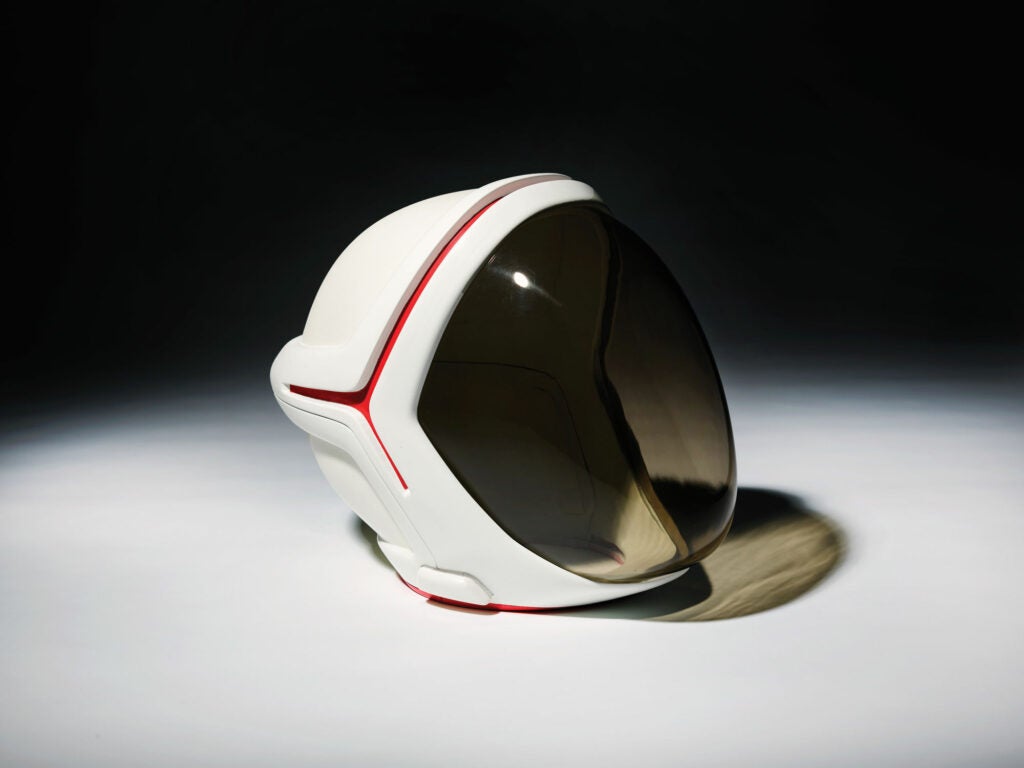 The Next Space Helmet

This is likely the helmet future astronauts will wear when they explore Mars for the first time. It’s part of the BioSuit, one of the suspected designs for the next generation of space suit. While it may not look like much, there’s actually a lot of technology embedded in the helmet. For example, it allows astronauts to look around more than any other space helmet and even features a heads up display, which will come in handy when we need to update our Facebook statuses without our cell phones or, you know, not die.
ESA
galleries
guns
images of the week
IOTW