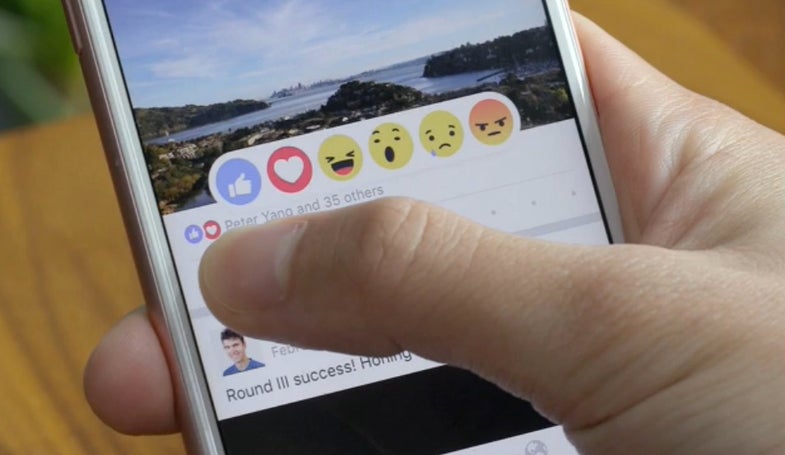 Facebook Reactions are here, and they’ve been a long time coming.

Since at least 2012, Facebook has been searching for ways to make its service more expressive. In the minds of product developers and managers at the social media company, there shouldn’t be an emotion that you can’t express on Facebook. The group’s quest brought them all the way back to Charles Darwin, with pitstops at Berkeley University and Pixar Labs.

The Reactions rolled out today are meant to be a quick way to express a flash of emotion, like amazement, a laugh, anger, a pang of sadness, or the feeling of love. Facebook has taken these emotions and assigned them animated emoticons with bits of text: Love, Haha, Wow, Sad, and Angry. These don’t replace the Like button, but are meant to be used alongside it.

Really like something? Pop a Love on it. See an awesome photo of a double rainbow? Drop some Wows.

Facebook’s first attempt at a more expressive platform was in the instant messaging tool. This was done through “stickers,” little animated emoticons users could send back and forth. They called on researcher Dacher Keltner, a professor of psychology at UC Berkeley, and he worked with Pixar designer Matt Jones to make a set of stickers starring a character called Finch.

Finch is a little yellow ball with facial expressions that harken to Darwin’s original sketches. (You can still find Finch by searching Stickers in Facebook Messenger.) In Darwin’s 1872 book, The Expression of the Emotions in Man and Animals, he outlined more than 50 universal emotions. Keltner gave Facebook about 40 emotions with sketches from Jones, all tested at his lab for readability. The would show dozens or hundreds of people the emotions, and simply see if they could recognize each one. For Finch, Facebook pared it down to about 16, and refined the ideas internally. These launched in 2013, and Facebook saw them as a success, keeping a team around to make more new stickers.

Finch served as a jumping-off point for Facebook’s new Reactions. About a year ago, Facebook reached out to Keltner again, this time to talk about which emotions might accompany the Like button. He worked with his team to send 43 ideas, and from that list Facebook picked, refined, and launched four, in addition to the “Love” Reaction.

The list was created partially from Darwinian emotions, and partially from the work of fellow UC Berkeley professor Paul Ekman, a psychologist whose research in the 1970s informed most of what we know today about facial expressions.

“Reactions, I believe, come straight out of Darwin,” Keltner told Popular Science. “The artistic rendering process that led to Finch and had great influence on Reactions is very much rooted in science and anatomy.”

But as attuned to our psychology as Reactions are, there are limits.

Every emotion that Facebook chose had to be extremely easily recognizable. Keltner says that he’s urged Facebook to add like voices or vocal inflections to the emoticons. He’s also advocated for giving the Reactions and Stickers arms or bodies in certain situations, saying that it’s easier to read body language than the face sometimes.

Prior to launch, Facebook’s Reaction team has been testing in seven countries, including Ireland and Spain. The Reactions will be translated into all of the 70+ languages that Facebook supports, which posed a huge challenge to Facebook’s sticker team.

For instance, the team was originally going to launch a “Yay” reaction, but it wasn’t being used in some countries so the team decided to launch without it, says Sammi Krug, who led the Reactions team.

The set of emotions are the same right now across the whole world, and the translations are all as close as they can be, too.

However, the Reactions team is looking to make changes if necessary. Seven countries don’t speak for the entire world, and despite their efforts of bringing native speakers onto the team, there’s always more data to be had.

“We’re going to continue, after we’ve launched the entire world, to get so many data points back, and the team will learn and iterate,” Krug says.